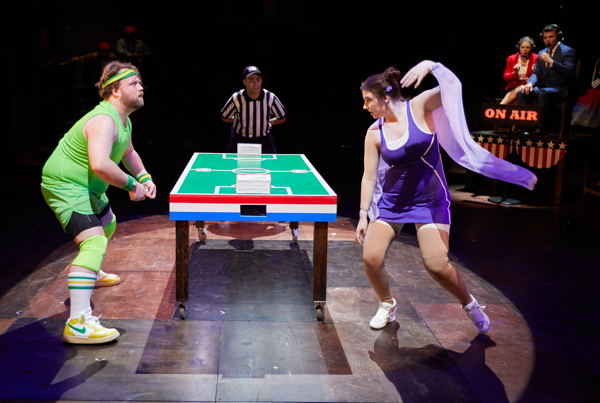 Humana Festival 2018: 'You Across from Me' brings a lot to the table

I've been attending the Humana Festival of New American Plays at Actors Theatre of Louisville since 2011, and one thing I've noticed over the years is that some of the most experimental and innovative work has been on display in the late-night show featuring the young performers of ATL's Professional Training Company.

This year's entry, "You Across from Me," which runs through April 8th, is no exception. As usual, the show consists of a series of short one-act plays--often little more than sketches--written by multiple playwrights and organized around a common theme. This time the unifying concept is "The Table" which, as Jessica Reese observes in her program notes, is "a place of contrasts--as site of communion and conflict, tradition and rebellion."

Over the course of twelve playlets, Jacklyn Backhaus, Dipika Guha, Brain Otaño, and Jason Gray Platt (the four authors) use tables in creative and innovative ways. Ms. Guha, for example, uses a 1950s-era dinner table as the focus for "A Date With the Family," in which a cheesy educational film goes horribly and comically wrong. She also uses a long, white table at which a large, pseudo-Amish family eats their evening meal as the departure point for a weirdly ambiguous bit of dystopian science fiction in "Mother's Blessings."

Mr. Platt makes a wobbly dinner table the central prop in the most drop-dead funny entry of the evening, "Mabel and Clare." It's a precisely composed and perfectly executed bit of non-verbal slapstick that evokes the ghost of Charlie Chaplin, as actors Marika Proctor and Nayib Felix try (and fail) to combat the laws of physics. Mr. Platt also wrote the clever "Prologue," delivered in mock iambic pentameter by the apparently disembodied head of actor Jack Schmitt.

Widely separated end tables in a hospital waiting room tell a simple story of how the things that divide us are less important than the things that unite us in Mr. Otaño's "Olive." And Ms. Backhaus (in collaboration with the acting ensemble) provides the hilarious finale to the evening with "The National Foosball Championships", in which the rivalry between champion Trent (Joseph Miller) and challenger Lilly-Anne (Emily Kleypas) mirrors the competition between commentators Chip (Calum Bedborough) and Junie (Emily Kaplan).

At around an hour and twenty minutes, the evening moves quickly under Jessica Fisch's direction, with creatively choreographed scene changes by members of the ensemble. It has its hits and misses, but is great fun overall and offers an encouraging look at the next generation of theatre stars.