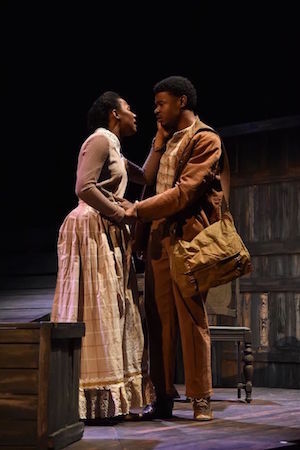 The Black Rep gives audiences much to consider and reflect upon with a sharply directed world premiere production of “Torn Asunder.” The deeply moving tragedy, drawn from our nation’s history, shows us some unpleasant realities about the slave trade. Stirring, honest and emotionally connected performances ensure the audience cares what happens, and the play’s conclusion is at once sweetly satisfying and devastatingly painful.

Nikkole Salter’s heartbreaking tale introduces us to Hannah, a young woman born into slavery, married to Moses in a non-binding ceremony performed by their master, and then ripped apart from her husband and family shortly before the Civil War. Hannah searches for her husband for years after the emancipation, going so far as to return to her previous master and, like many other newly freed citizens, publishing inquiry after inquiry in the newspapers searching for any family members. She eventually creates a new family that includes freed slaves Melinda and Henry. The bonds they share are fragile and built from pain, but genuine. When Moses finally finds Hannah through her newspaper ads several years later, she must choose between the people she loves.

LaShunda Gardner is radiant, willful and completely invested in the character of Hannah, a young house slave who has been taught to read and write so she can help her master with recordkeeping. Myke Andrews is devoted and determined as Moses, and, although they get off to a shy and hesitant start, the two actors have chemistry that leaps from the stage. Their love story is filled with complexity and tragedy, but their personalities compel the audience to hope against odds that are not in their favor.

As Hannah’s close friend, Brandi Threatt has a compelling story of her own and the changes in her character arc are satisfying and well portrayed. Carl Overly is protective, nurturing and quietly persistent as Henry Washington, and he and Gardner have a less intense but no less believable chemistry that suits their characters. Graham Emmons is appallingly believable as John, Hannah’s master’s son-in-law and future owner and Alan Knoll skillfully traverses a variety of white men, fully committing to performances that are honest, if uncomfortable to watch. The men they portray aren’t likeable or sympathetic, and while unpleasant, it’s a credit to the writing, direction and performance that neither actor shies away from this fact.

Set designer Dunsi Dai has fashioned a suggestive environment that represents multiple locations and the sense of a journey, reinforcing key themes of the play. Lighting designer Kathy A. Perkins, sound designer Kareem Deanes, projection designer Geordy van Es and costumer Daryl Harris complete the picture. Everything feels right, but the transitions and scenery changes are also the show’s critical problem. For a set that seems purposefully simple as a way of accommodating multiple locations, scene changeovers are exceptionally long, taking audience members out of the story with ungainly starts and stops. As a result, the pacing is a bit uneven and the actors occasionally struggle to get the energy to the right level, resulting in occasional lags. Luckily, captivating performances and excellent context do much to make up for the herky-jerky pacing.

Gardner ensures that Hannah’s intelligence is transparent, and her sense of fairness and self-worth unmistakable. Less experienced than Andrews’ Moses, Hannah is raw and brutally honest at times. Her pain is expressed in bold statements, protective moves and tiny flickers with equal intensity. Andrews and Overly provide opposing portrayals of men who feel authentic and are determined to put their past behind them.

Threatt’s personification of the much abused and cast aside Malinda perfectly contrasts, yet compliments Hannah’s. Her anguish and the strength required to keep hopeful -- the necessity of forgetfulness, if not forgiveness -- is a constant presence and reminder. The change in the women’s relationship is as satisfying as either romance. Both Emmons and Knoll, two accomplished and naturally giving actors, approach their roles with accurate disdain, entitlement and hate. They are unlikable and unsympathetic; while successfully avoid caricature villainy, neither man tries to convince us otherwise.

Though tragic, there are many touching, even hopeful, moments in the show and the resilience, adaptability and fight in the human spirit is deeply resonant. “Torn Asunder” is a riveting play that presents a story of African-American history from the perspective of African-Americans. We simply do not have a large enough canon of these stories, even as we know they exist. The cruel reality that human beings were bought, sold, and traded without concern for their emotional or psychological well being or consideration of familial ties cannot be avoided in the powerful show.

Playwright Salter and director Ron Himes do a masterful job of not simply bringing this story to life, but of creating a space where we can look at unpleasant truths many would rather ignore but we need to see. “Torn Asunder,” continuing through April 29 at The Black Rep, shows how easily families were torn apart because laws of the time supported the idea that one person could own another person. The stories are evocative and painful to watch at times, but they are important and the production is beautifully wrought and acted.