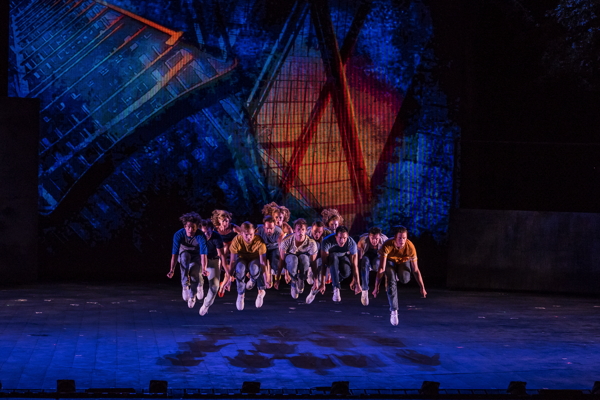 The Muny is celebrating its centennial this season, and they're kicking it off this week with a big, bright theatrical present in the form of the musical revue "Jerome Robbins' Broadway."

No theatre has produced it since then, primarily because of the massive legal and financial hurdles involved. The individual numbers have to be approved for performance by the estates of nearly two dozen composers and authors, and the production involves the work of dozens of singers and dancers (62 in the Broadway original, 59 at the Muny).

It's a massive undertaking, which is why the current Muny production will probably be a once in a lifetime opportunity for lovers of musical theatre. Although it clocks in at just under three hours, the Muny revival lacks two of the numbers from the Broadway version, but it's otherwise as close as you can get to that famed original. If you love a good musical, in short, "Jerome Robbins' Broadway" is a must-see event.

Because the show is essentially a "greatest hits" compilation, there isn't a single number that isn't at least good, and most are great, although I found some more memorable than others.

Scenes from shows that are rarely seen were the most interesting for me, beginning with the "Charleston" sequence from "Billion Dollar Baby," a 1945 show set in the "Roaring 20s" with a score by noted composer Morton Gould. The setup is deceptively simple: groups of classic 1920s types--flappers, college kids in raccoon coats, gangsters, slumming socialites in evening dress--dash into and out of a speakeasy. They all do character-specific versions of the titular dance step, often combined with a stiff-legged, rocking motion that makes them seem to glide across the stage as if pulled by an invisible string.

On that foundation, Gould and Robbins build an elaborate and wildly inventive sequence crackling with energy. Unlike most of the other numbers, there's no singing here at all, unless you count the occasional bit of spoken period slang ("It's the bees knees!" "Whoopee!") used to punctuate small moments. It's pure dance heaven.

"I Still Get Jealous" (from "High Button Shoes," 1947) is far more modest, featuring only two performers: Maggie Lakis and Rob McClure. Their elegant, Vaudeville-inspired soft shoe is a delight, and allows the rest of the company to recuperate a bit after the strenuous "Charleston." Ms. Lakis and Mr. McClure (who also acts as the show's narrator) are also impressive as Golde and Tevye in the "Fiddler on the Roof" selections in Act II.

The "Bathing Beauty Ballet" (to the tune of "On a Sunday By the Sea"), the other selection from "High Button Shoes," goes on just a bit too long for my taste. But the Mack Sennett-inspired chase scene, with dancers throwing themselves in and out of doors like a Feydeau farce on steroids, is so astonishingly complex and performed with such superhuman precision that I was ultimately captivated.

"The Small House of Uncle Thomas" from "The King and I," is another high point in the evening. In it, Tuptim (Sarah Bowden), one of the King of Siam's slaves, narrates a performance of her own adaptation of the book "Uncle Tom's Cabin," that Anna has loaned her. The play within a play is done in the manner of Siamese ballet, with arms and legs often cocked at unnatural right angles. The Muny cast carries off the highly stylized movement beautifully, led by Erica Wong in the demanding role of Eliza.

And let's hear it for Jenny Powers' smoky, sultry delivery of the Irving Berlin novelty number "Mr. Monotony," about a trombone player whose limited repertory drives his wife into the arms of a clarinetist. It was originally written for (and then dropped from) the 1948 film "Easter Parade" as well as the stage musicals "Miss Liberty" and "Call Me Madam." The fourth time is the charm, apparently. The dance number that followed featured dramatically athletic performances from Alexa De Barr, Garen Scribner, and Sean Rozanski.

For most audience members, I expect, the big hits were the selections from "On the Town" and West Side Story." The latter is probably the most familiar, if only because of the immense popularity the 1961 film version, which Mr. Robbins co-directed. Both are filled with the mix of classical, jazz, and modern dance moves that were typical of his work, and the versatile cast of singers and dancers the Muny has assembled here do them full justice.

Sailors Chip, Ozzie, and Gaby (Drew Redington, Leeds Hill, and Garen Scribner) seem to defy gravity as they zip across the stage in "On the Town." Ensemble members posture aggressively and leap through the fight sequences in "West Side Story." Hildy and Claire (Jenny Powers and Sarah Bowden) join the sailors for a raucous comedy number in "Ya Got Me." And the entire ensemble delivers a moving version of "Somewhere" to conclude the first act.

"I'm Flying," from the ever-popular "Peter Pan," was a big hit with the audience as well, with Sarah Marie Jenkins and the three Darling kids (Elizabeth Teeter, Gabriel Cytron, and Cole Joyce) zooming around the stage on flying rigs. The stagehands may be responsible for keeping performers airborne, but it takes a skilled dancer like Ms. Jenkins to make it look graceful.

This is, in short, musical theatre gold.

The program lists Harrison Beal, Dan Knechtges, and Ralph Perkins as "additional choreographers." I'm not sure where Robbins's work ends and theirs begins, but the overall result certainly feels like a Robbins show, which is probably what really matters.

Robin L. McGee's seemingly endless array of eye-catching costumes, Paige Hathaway's bright sets, and Nathan W. Scheuer's video projections all add to the strong visual appeal of the show. Michael Horsley conducts the orchestra in an expert rendition of the long and sometimes complex score (even in pared-down orchestrations, Leonard Bernstein's music can be tricky). And director Cynthia Onrubia pulls everything together into a satisfying whole.

Yes, the unseasonably hot June weather this year can make a trip to the Muny less comfortable than it was in previous decades, but it's worth it for the unique experience that is "Jerome Robbins' Broadway." Performances continue nightly at 8:15 through Sunday on the outdoor stage in Forest Park.