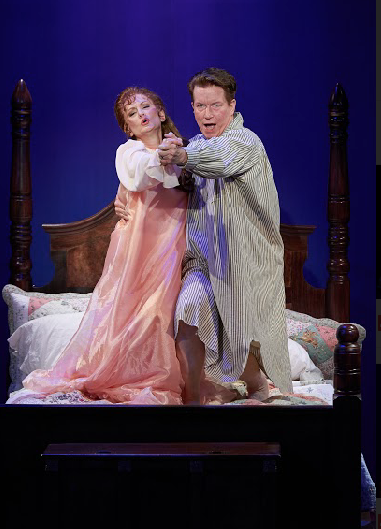 ‘I DO, I DO’ gives audiences a double take on love and marriage

STAGES St. Louis opens its summer musical season with “I DO, I DO,” an old-fashioned ode to the blessings and challenges of holy matrimony. The good natured show, which traces the ups and downs of a long and ultimately loving marriage, is a mostly positive look at very traditional monogamy. This production cleverly employs a rotating two-person cast, with Corinne Melançon and Steve Isom and Kari Ely and David Schmittou sharing the role of the happy couple, Agnes and Michael, in alternating performances.

Director and choreographer Michael Hamilton and the production team made a smart choice with the dual casting, as each role asks much of the actors physically, emotionally and vocally. The songs are complex and even the harmonies feature some tricky runs. There’s full on choreography that includes lifts and complex footwork, with important, emotionally driven dialogue and quick costume changes, too. Considering the show comes in at just over two hours with the couple aging fifty years, “I DO, I DO” is demanding, demanding.

Both couples expertly affirm they are up to the challenge, though each pairing comes with its own distinct attitudes and personalities.  Ely and Schmittou feel more genuinely youthful and naïve at the open, while Melançon and Isom play the roles a touch older and wiser. Ely and Schmittou are surprised and humorously caught up in the newness of every life change; Melançon and Isom are more deftly comic, with a knowing air. Each pairing works, as both couples are essentially likeable with voices that harmonize quite well. “I Love My Wife,” “My Cup Runneth Over,” “Flaming Agnes,” “Where Are the Snows” and “Someone Needs Me” are particularly strong numbers from both casts and Melançon has a singular moment with “What Is a Woman.”

Still, there are distinct differences in each cast. The actors’ choices and personalities influence the story arc and tone set by each couple, continuing with consistency from the first note to the final curtain. Melançon and Isom move effortlessly through every scene and dance. They bring an air of success and sophistication to Agnes and Michael as well as a somewhat jaded perspective. Still, there’s a loveliness to their coupling that suggests deep affection and friendship help them stay in love.

Ely and Schmittou are more vulnerable and raw with their love and their emotional highs and lows are a bit bigger. Ely expresses a sense of wide-eyed innocence in the young bride and Schmittou the uncertain confidence of a young man in a bit over his head but determined to keep swimming. As the years pass, gullibility turns to knowing smiles and painful tears, but Ely’s hopeful devotion to Schmittou remains constant. Both interpretations are satisfying, and with such thinly drawn characters each coupling works to good effect.

Hamilton’s choreography lightly references the different styles of the decades between the couple’s marriage in 1895 and the show’s conclusion some 50 years later. The four poster bed, chaise lounge and heavy furniture reflect the late Victorian period when the flat was likely furnished and set designer James Wolk incorporates small changes, such as updated bedding, to mark the passing years.

Sean Savoie’s lighting design is flattering and efficient, the proscenium frame and light changes are particularly charming, and Lisa Campbell Albert provides solid musical direction; unfortunately, the costume design by Brad Musgrove is less successful. The problem starts in the 1920s decade. Though likely technically accurate, Agnes’ pajama ensemble and long bob looks strikingly 1970s and her mother-of-the-bride ensemble in the next scene definitely fits the 1980s. This sense is at least in part due to the fabric and color schemes selected; the tendency of certain styles and patterns to reappear in fashion may heighten that feeling. In addition, Michael’s large mustache and nondescript outfits could fit many decades.

The unfortunate truth about the musical, however, is that it is quite dated and the characters, though malleable, are stereotypes living a stereotypical story arc that doesn’t ring as contemporarily realistic. As a result, there are several racist quips, which are probably easily changed, and a whole lot of sexism that isn’t so easily addressed. Plus the math doesn’t quite add up, if you’re paying close attention to the timeline. Topping it all off is the simple fact that our world has changed and our shared understanding of women, families and marriage is vastly different today, no matter your political, religious or personal views.

At it’s heart, however, “I DO, I DO” continuing through July 1 at STAGES St. Louis, is a sweet, nostalgic look at love and monogamy that’s warm and optimistic, with a dash or two of realism thrown in for balance. Both casts feature strong performers who skillfully execute the same song and dance routines with delightfully different, and equally satisfying, results.