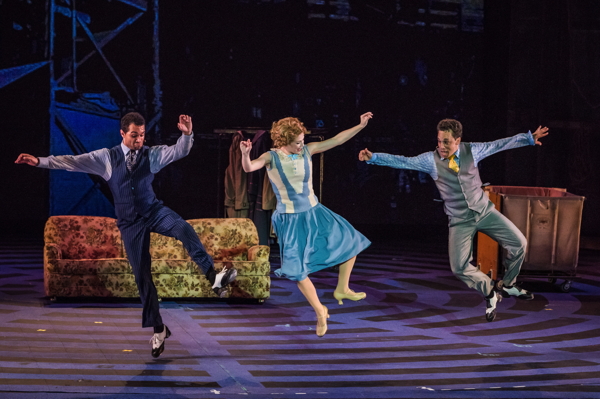 'Gotta dance!': A strong cast delivers the goods in 'Singin' in the Rain' at The Muny

"Singin' in the Rain," the 1983 stage adaptation of the beloved 1952 movie musical, will probably never make anyone's list of Best Musicals of All Time. But the Muny's production of the 2012 London revival is, to paraphrase the Bard, entertaining enough and 'twill suffice.

Set in the late 1920s, the story of both the original movie and the stage version by Broadway veterans Betty Comden and Adolph Green concerns matinee idol Don Lockwood (Gene Kelly in the film), pianist/sidekick Cosmo Brown (Donald O'Connor), and aspiring actress and singer Kathy Selden (Debbie Reynolds). When Lockwood's movie studio decides to make the change to talking pictures, the grating voice of Lockwood's co-star Lina Lamont (Jean Hagen) threatens to end both their careers even as her unwelcome interference threatens the budding romance between Lockwood and Selden.

When I last saw this show at the Muny back in 1995, I suggested that the acting opportunities available to the leads in this show were somewhat limited by the fact their characters aren't fictional creations so much as distillations of the public personas of three legendary performers who appeared in the original film. What was called for, I thought, were skilled impersonations rather re-interpretations.

Well, we all make mistakes.

Viewed over two decades later, I'm now obliged to admit that a talented musical theatre actor can capture the essence of the film's original stars without ever coming close to celebrity impersonation. That's certainly what's happening this week in Forest Park.

As Don Lockwood, Corbin Bleu lights up the Muny stage with his own version of Kelly's famous Blitzkrieg charm and blinding smile, along with strong, graceful dance moves and an impeccable voice. Whether he's shuffling, tapping, or soft-shoeing through classics like "Fit as a Fiddle", "Good Morning", or the title song (complete with on-stage rain), or crooning to Berklea Going's Kathy Selden, he's always in character and in the moment. Besides, you've got to admire any hoofer who can look that good on a rain-slicked stage.

Ms. Going is also treasure as the iron-willed and golden-voiced singer who is only willing to keep her light hidden under a basket for so long. Her performance of "You Are My Lucky Star" is a high point of the first act, as is her song and dance number with the ensemble women in "All I Do Is Dream of You." She's also a more than capable dancer, holding her own with her co-stars in the lively "Good Morning."

Jeffrey Schecter is Cosmo Brown. The role calls for a combination of precise comic timing, athletic dancing, and the ability to be endearing without becoming sappy. Mr. Schecter does it all, and splendidly. The audience took to him immediately on opening night, applauding enthusiastically at his big comic dance number "Make 'Em Laugh."

Megan Sikora hits all the right notes--along with some deliberately hilarious wrong ones--as Lina Lamont, the woman with a voice that could peel paint. The part offers less room for interpretation than the three leads since it's mostly a matter of reproducing Ms. Hagen's brassy bombshell shtick from the film, but even so Ms. Sikora puts her own comic spin on it. That's most apparent in her second act showstopper "What's Wrong With Me," a song that never appeared in the original film but probably should have.

The supporting cast is strong as well, with fine performances from Jeff McCarthy as studio boss R.F. Simpson, Debby Lennon as both gassy gossip columnist Dora Bailey and Lamont's long-suffering elocution coach, George Merrick as film director Roscoe Dexter, and Halle Morse as Lina's co-conspirator Zelda Zanders. A special tip of the critical hat is also due dancer Lizz Picini for her slinky and sexy turn as The Girl in the Green Dress in the "Broadway Rhythm" number.

Under the direction of Ben Whiteley the Muny orchestra sounded at the top of their game on opening night, the humidity not withstanding. Director Marc Bruni keeps everything moving briskly and looking polished, while Rommy Sandhu's choreography is a neat mix of classical dance moves and vintage styles of the 20s and 30s. Sets by Paul Tate dePoo III, video projections by Greg Emetaz, and lighting by Nathan W. Scheuer all help to create a properly glitzy Hollywood ambience, as do Tristan Raines's period costumes.

So, yeah, "Singin' in the Rain" is great fun, although on opening night the show was not without its issues. There were some ragged spots, a missed entrance, and everything looked just a bit under-rehearsed. That's because, as fate would have it, the final dress on Tuesday night was disrupted by a massive thunderstorm. On-stage rain is essential for "Singin' in the Rain," but only when it's under the control of the stage manager.

I expect those issues to be resolved by the time you read this, though, so I have no hesitation about recommending it to fans of the original movie or anyone who is looking for a light, entertaining musical evening. And unlike the version of the show I saw back in 1995, this more streamlined revival never wears out its welcome. If the weather permits, go and enjoy. Performances continue through Tuesday, July 3rd, and tickets are available at the Muny web site.