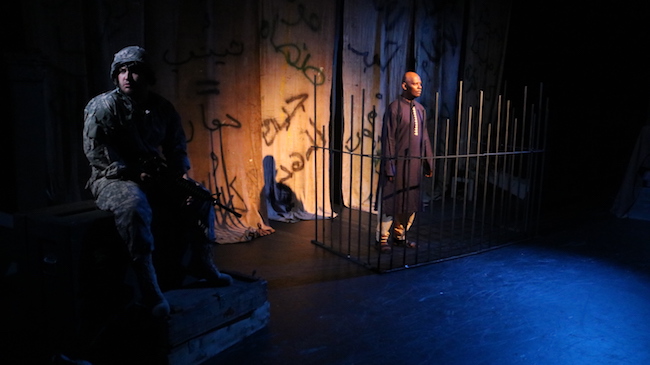 ‘Bengal Tiger at the Baghdad Zoo,’ adroitly explores the hereafter and the here and now of war

It is never easy to create and stage a play about war. War is violent, loud, and inevitably accompanied by bullets, blood and explosions. From a plot perspective, the tension is consistently urgent, the consequences realistic and the desire for resolution immediate and emotional. Playwright Rajiv Joseph and the Black Mirror Theatre accept and acknowledge these challenges, and the company’s production of “Bengal Tiger at the Baghdad Zoo” is powerfully effective, at times heart wrenchingly painful and always thoughtful and provocative.

Tommy and Kev are American soldiers standing guard over the Baghdad Zoo, particularly the Bengal tiger in the cage nearby. Tommy has seen more warfare than Kev and is not eager for battle. He was present when Hussein’s sons were killed in the raid on their mansion and he has the artifacts to prove it. Kev is perhaps a little too intense, trigger happy and desperate to show he is ready for a fight. The tiger is hungry and angry at the foolish lions. Tommy thinks the tiger looks hungry, too. The tiger thinks he’d really like to try a taste of freedom, and soon he does.

This intriguing set up is the entry into a play that wanders through a war torn city. Along the way, the tiger questions whether there is a god and, if there is meaning to all this, what does that mean about him? He’s a tiger, it is his very nature to hunt and kill. Naturally, these questions are reflected through the soldiers and the Iraqi citizens encountered along the way. The humans are all dealing with the psychological weight and terrifying circumstances of war, from the soldier bullied by others and Uday Hussein’s conflicted former gardener to the cautious leper in the dessert who may be hiding a golden toilet seat.

Don McClendon is mesmerizing as the Bengal tiger and, yes, the audience can understand his speech and hear his thoughts. The tiger often breaks the fourth wall to speak directly to the audience, in many ways we travel with him through the streets, a garden and the desert outside of Baghdad. Even with the tiger as our guide, the blunt force of war hits hard in this show, thankfully the tiger is as funny as he is perceptive and curious.

Director Catherine Hopkins guides the show with clear intent and though there are a lot of scene changes they are quick and efficient. Strong work is turned in by McClendon and Brian J. Rolf, Kalen Riley, Eric Kuhn, Haley Medrano, Charles Winning and Laura Kyro are believable and connected to their roles. Additionally, an attention to Arabic in print and dialect completes the moving performance of a story that needs to be both told and listened to.

Riley and Kuhn capture the essence of young soldiers with a mix of misplaced aggression and fatigued restraint, and their fear is palpable in scenes where they do not understand the culture or language around them. Rolf’s performance as Musa, the former gardener to the Hussein’s turned translator for the American soldiers, is one of the most heartbreaking and authentic performances I’ve seen this year. Medrano is beautifully innocent and sympathetic as Hadia while Winning is convincingly menacing, cavalier and cruel as Uday Hussein.

The stage design by Gwen Wolffson is relatively sparse and immensely effective. A graffiti covered curtain wall and weather-worn cage are prominent, with crates and broken garden columns strewn about the ground or stacked strategically, depending on the scene. Michelle Zielinski’s lighting and Hopkins’ sound design complement the simple set, shifting the audience’s view and adding appropriate din and contextual cues to the story. The action -- physical, emotional and intellectual -- is the focus of the play and the creative team enhances the experience.

The show is not about good guys and bad guys, because those labels are dependent upon your perspective. But it does tackle the very real costs of war and its countless related deaths. Not simply soldiers on the battlefield or cities destroyed, but also the collateral damage. Innocent bystanders, unfortunate victims of rape, PTSD and suicide, misplaced anger, miscommunication and, yes, animals wild and captive.

While it is unclear whether any of the actors on stage are Arabic, it is apparent that considerable time and effort has been spent to ensure accurate pronunciation and respect for the Iraqi dialect and culture. The company also noted the assistance of members of the Iraqi community during rehearsals and production, and I was told selected community representatives were invited to preview and provide feedback on the show. These overtures are essential to building consciously inclusive and respectful art and I hope that the play encourages diverse voices to share their stories and talents.

Joseph’s “Bengal Tiger at the Baghdad Zoo” was a Pulitzer Prize finalist and the expertly crafted script elicits strong reactions. There are realities of war that cannot be overlooked and the scenes of violence and confusion are explosive in ways that will likely make some members of the audience uncomfortable and may be triggering for veterans and survivors of abuse. But the balance of the intensity and chaotic power of war against the deeper questions of humanity and faith reverberates with honesty.

The provocative and emotional play asks us to watch and listen closely but does not cast judgment beyond the fact that war is exponentially more immediate, disorienting, painful, destructive and deadly than just the horrific images we see on TV.  Black Mirror Theatre’s impressive production of “Bengal Tiger in the Baghdad Zoo,” continues through August 4. The varied perspectives are eloquently presented, encouraging reflection and personal evaluation in a way that may make some uncomfortable, underscoring questions we should be asking ourselves when we consider the meaning of war. Engaging performances add to the power of the resolutely thoughtful and emotionally exhaustive play and the result is a show that commands your attention and illuminates as much as it entertains.