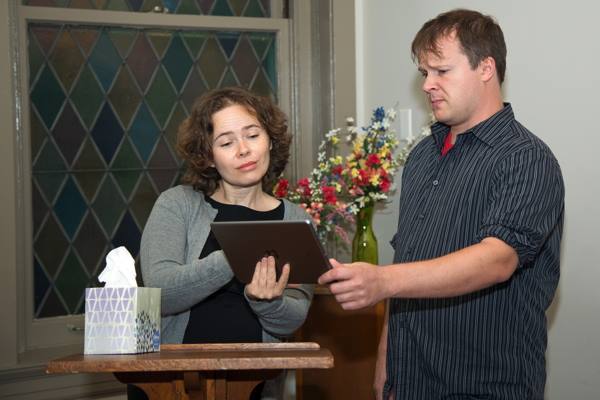 Contemporary life is filled with conversation and interaction, from those we know and, at least presumably, care about to brief encounters with people we’ve never met.  Each of these encounters is rife with possibility, but more often than not the moment passes without notice or reflection. Steven Dietz comically realistic “This Random World (The Myth of Serendipity)” tackles the subject of missed connections in a warm, quirky tale that calls into question our very human desire for making sense, for seeing fate in random occurrences and for thinking we have all the answers.

West End Players Guild finds humor and a lot of affection in Dietz’ gentle play, taking a minimalist approach that keeps the focus on the characters and their near misses. Though there are a couple of big events that occur, the story is built around the smaller moments. Times when people cross paths with someone without realizing that they have a bond or times when they do try to connect but things don’t quite work out. Whether through off timing, misunderstanding, hesitation or a myriad of unimportant moves, humans seem to miss opportunities that could change their life, or at least alter the way they understand their life, all the time.

The play opens with siblings Beth and Tim Ward discussing Beth’s death. Not that Beth is about to die, but she is going on a trip to Nepal that increases her odds of dying, and their mother is getting on in years as well. It’s an odd but funny open to the show, and Beth and Tim’s failure to really get each other’s perspective is a microcosm of the entire show.  The dialogue is unaffectedly comic, the situations mostly realistic and the outcomes surprisingly uneventful for a show that lingers with surprising warmth.

Their mom Scottie is a bit distant from her children, and she purposefully keeps them in the dark about her life and adventures. She chooses caretaker Bernadette to accompany her on her journeys and lets her children think she’s never been more than a few miles away from her home her entire life. Before this charming little puzzle box of a show is over, Tim will have crossed paths with Bernadette’s sister Rhonda and Beth will bicker with Tim’s former girlfriend Claire’s ex-boyfriend Gary without any of them realizing that they already have a connection. There’s a sense of bittersweet to the story that’s buoyed by solidly wistful and sympathetic performances.

Tinah Twardowski and Ted Drury are engaging and genial as the siblings, their back and forth chatter feels naturally realistic and unaffected, and Lynn Rathbone is lovely as their sometimes forgetful but always fully present mom. Twardowski is pleasantly self-absorbed, with a desire to travel the world that seems in opposition to her character’s analytical, worrisome personality and yet somehow fits the character. Drury is effortlessly engaging, fully connecting to each scene and actor with a likeable nonchalance. His scenes are well motivated and compelling, no matter who he’s interacting with, though you want to root for him at one moment and shake him from his complacency the next. Always reliable, Rathbone sparkles with both mischief and contentment as Scottie. There’s genuine affection and camaraderie between her and Jessa Knust’s genuine Bernadette, and her character's presence lights up the theater with well appreciated joy.

Eleanor Humphrey is warm and engaging as Claire, and she has some of the best moments in the show. Convinced that Tim is not Tim, she’s hilariously frank, though you really wish the two would reconnect. Kate Weber is a bit reserved as Bernadette’s sister Rhonda, who works at a funeral home, but she lights up when she talks about her mentor and proves a capable and graceful emissary when Scottie needs her. Finally, Joel Zummak is overtly clueless as Claire’s ex-boyfriend, though he unknowingly offers important insight to the characters he encounters, and his scene with Twardowski is comically relatable.

Director Rene Sevier Monsey’s sparse set is effective while keeping the attention on the characters and story, but I wish more scenes were on the proscenium or an elevated platform as some of the dialogue gets lost, which is emphasized if you sit towards the back rows. There are also a few times when the story seems to lag, particularly the transitions between scenes, but overall the pacing is pleasant. Mary Beth Winslow’s sound design is a nice thematic compliment to the script and Tracey Newcomb’s costumes appropriate to each character’s personality and situation.

“This Random World,” which closed October 7,  is rather direct and almost unremarkable on the surface, but the possibilities each interaction contains are truly intriguing and interesting and the characters well-developed. Like most of the West End Players Guild shows, the focus is on character and storytelling and here the company succeeds with its usual sensitivity and flare. Fans of thoroughly entertaining theater in a small, intimate setting may want to put the company’s next show, “The Great Seduction,” opening November 9, on their calendar.