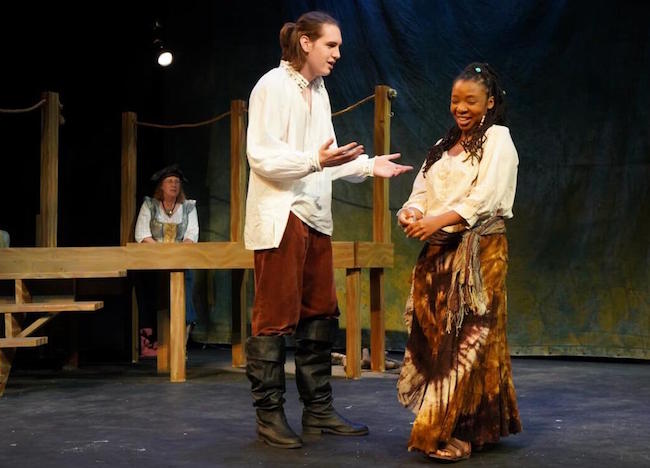 St Louis Shakespeare delights with an inspired interpretation of “The Tempest” that embraces the magic and mystery of Shakespeare’s otherworldly tale of love and revenge. The implausible seems logical on a forgotten island inhabited by creatures strange and familiar, adding to the poetic sensibilities of the light and airy romantic comedy. Strong performances and sure-handed guidance by director Patrick Siler ensure an inviting and entertaining production.

Prospera and her daughter Miranda have lived on an enchanted island in the middle of the sea ever since Prospera’s scheming sister Antonia stole Prospera’s title and land. As fate, or magic, would have it, Antonia as well as queen Alonza, her son Ferdinand, brother Sebastian and various servants, wash up on the island’s shores after horrible storms wreck their ship. The unsettled waters scatter the passengers, notably separating Ferdinand from the others and leaving his mother bereft with the thought he has died. As the audience knows, the young prince is actually busy falling in love with Miranda, and she with him, on another part of the island.

The story unfolds as each of the sets of survivors busily searches for the others, or a way off the unfamiliar island. Prospera directs the action with a wave of her magic staff, commanding the weather and the island’s many sprites as well as the foul Caliban, who longs for Miranda. Can Prospera avenge her sister’s wrongdoing and secure a beneficial marriage for her daughter? With the help of Ariel and the other spirits, this story may just have a happy ending.

Donna Northcott gives Prospera a wistful, romantic nature that adds warmth and softens the edges of the quixotic character. The interpretation is less vengeful and more nurturing; Northcott even shows a sympathetic inclination towards the unfortunate Caliban. Karl Hawkins proves an enchanting and humorously attuned Ariel as he flits and dances around the stage with telling expressions and mischievous energy. Dustin S. Massie scowls and howls as the monstrous Caliban, but he counters his outward countenance with a surprising undertone of loneliness and need.

Erika Flowers-Roberts and Ian Carlson are charmingly besotted as Miranda and Ferdinand. Flowers-Roberts beguiles with a clever mind and open nature, and Carlson eagerly embraces her giddy affection, as does the audience. The chemistry is palpable as the two convincingly convey youthful curiosity and the excited flush of first love. Teresa Doggett and Charles Winning gleefully embrace the conniving, ambitious nature of their characters while playing off each other to good effect. Laura S. Kyro is a confused but wise and genial queen, and Jeff Lewis and Anthony Wininger are comically daft as drunken shipmates and servants to the queen.

Kyra Bishop Sanford’s set creates several distinct levels that serve the story and the show’s pace well while providing multiple entrances and exits to keep the action constant. Lighting designer Joseph Clapper and technical director Jared Korte add some key effects, while song composer Steve Neal and soundscape percussionist David A. N. Jackson add touches of the ethereal to the fantasy. Costumer Michele Friedman Siler creates visually pleasing, period suggestive costumes with a few anachronistic touches that allow both Prospera and Antonia to move more freely, though Northcott’s trousers are unfortunately distracting. The fabric and construction look a bit like knee-length sweat pants and lack the sheen or elegant movement of the other costumes.

Attention to blocking is also an issue during some scenes as Northcott, in particular but not exclusively, delivers multiple lines while facing upstage, muting her voice and impacting the effect of her delivery. Even then, however, the tone and intention of the lines are clear and well spoken and I encourage Siler and the company to pay more attention to these minor but important details in their next production. What the company does so well is embrace the possibilities and application of Shakespeare for modern audiences; with this show they’ve demonstrated the power of conviction, expression and language to enchant and transport audiences.

Fans of the Bard and lovers of good, entertaining theater should consider following the company’s productions. The shows generally stay true to the language and plotlines of Shakespeare (or other selected playwrights), but the company embraces the relevance and creative possibilities of each play. The approach ensures entertaining interpretations that are fully internalized and naturally delivered. The cast and percussionist Jackson embrace the rhythm, poetry and whimsy of the “The Tempest,” continuing through October 21, and director Siler maintains clear diction and intention. Together, they keep the audience fully engaged in St. Louis Shakespeare’s delightfully fantastic production.