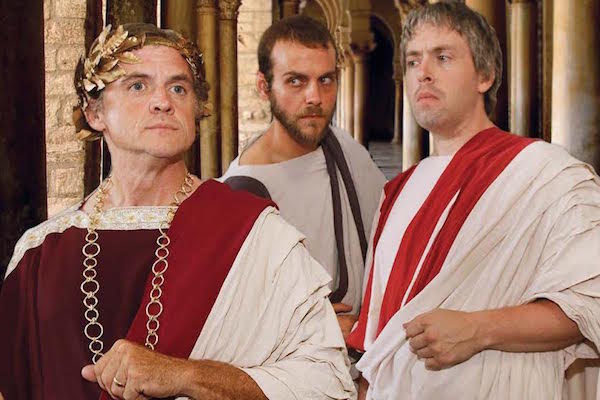 William Shakespeare's Julius Caesar is not an easy play to interpret or produce. First, a company must overcome the fact that the play is required reading in almost every U.S. high school program, and often assigned again in college. Secondly, Shakespeare's lengthy examination of character and ambition is cloaked in layers of mythology, war, and politics.

As an audience, we collectively know the story arc before we arrive to the theater: Caesar is brutally murdered at the Senate by members of his inner circle on the Ides of March. They are led by Cassius, a jealous army commander who convinces the loyal Brutus to take his side. Eventually, the noble hero Marc Antony revenges Caesar's death, and young Octavius Caesar ascends to the leadership of Rome. This is not the first St. Louis Shakespeare production of Julius Caesar, however, and the company and director Tom Kopp have learned a lesson or two from previous shows.

The tone of the company's current production is more personal and intimate than any other production I've seen, with a politically astute sensibility and layers of symbolism. There's less focus on the battle scenes and more emphasis placed on the characters, their relationships and flawed decisions. A few scenes languish under this approach, while others lack requisite intensity, and the second act is always problematically wordy, but the overall production is nonetheless captivating and the actors turn in strong performances that kept me interested and involved to the final curtain.

Ben Ritchie is honest to the point of recklessness as the Brutus, the wise general who the fatal habit of believing all men to speak the truth even when in pursuit of greater ambition. Ritchie fully commits to the character's intellectual and personal honesty, throwing sympathetic light with a thoughtful, measured portrayal. Brutus may be a good man to have in court or on the battlefield, but his fundamental inability to judge character is a fatal flaw and Ritchie's realization of such, near the end of the second act, is a lesson in controlled devastation and stoic response.

In his best role to date, Max Knocke turns in a slithering performance as the manipulative Cassius, and it's a pleasure to see the impressive growth he's had over the past year. I encourage him to continue to find levels and emotional connection, but his Cassius was filled with clear motivation and wonderfully sinister expression. Brennan Eller is stoic and forthright as Marc Antony, though I would have like to see even more anger at key moments, while Tim Callahan is vanity itself, from his flashy rings and brightly colored clothing he to his appropriately over coiffed wig and dismissive flicks of his hand.

Annalise Webb, Bridgette Bassa, Michael Pierce, Josh Saboorizadeh, and Jake Blonstein are memorable in supporting roles and the ensemble comports itself well, ensuring the essential story is conveyed with clarity and purpose. Webb and Bassa are impassioned as they try to protect their husbands from a fate it seems only they and Saboorizadeh's soothsayer can clearly see, and Pierce and Blonstein are engaging as young Octavius and Brutus' faithful servant Lucius. Chuck Brinkley, Eric Kuhn, Erik Woods, Ted Drury, DJ Ludwig, Lucas Howard Reilly, Joshua Parrack, Abby Lampe, and Kaitlynn Ferris capably fill out the large cast, displaying clear purpose and loyalties in multiple roles.

But this is really the story of one man's tragic flaw. It is Brutus who let's Cassius convince him Caesar is too ambitious and must be killed for the good of Rome. It is Brutus alone who spares Marc Antony's life and allows him to speak to the Romans. And, finally, it is Brutus who too late realizes his mistakes and the price Rome will pay.

The company makes good use of the Ivory Theater stage, and Chuck Winning's set is filled with Roman columns and multiple levels. I enjoyed the restraint showed with the fight choreography, by Kuhn, which kept the focus on the more subtle but important battles of will and personality that give this show its spark. The costumes were a somewhat mixed bag, as I found the contemporary sandals and belts a bit distracting, but genuinely appreciated both the overall roman style and that only Caesar and Calpurnia wore robes saturated with richly dyed color.

This being a political year, I enjoyed the subtle gamesmanship and symbolism. Julius Caesar, running through August 14, 2016 at St. Louis Shakespeare, is a tangled knot of ambition, power, and persuasion in which the cooler head fails to prevail. Tom Kopp's pointed direction seems intended to convey a cautionary tell, and the actors embrace the choice, adding layers of meaning and insinuation to Shakespeare's already dense play. Though the pacing lags at times, the resulting show is quite enjoyable with astute observations that easily extend to our current political climate.