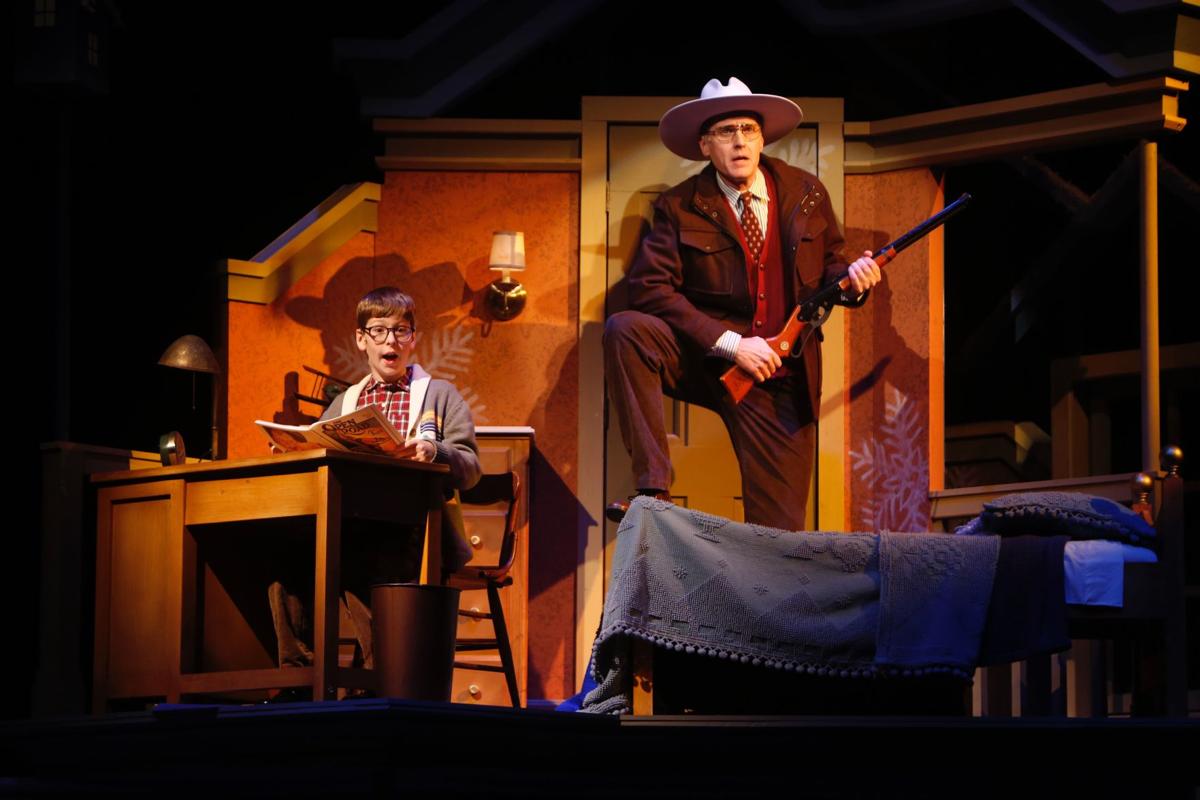 Based on the 1983 film of the same title and set in the mid-to-late 1950s, "A Christmas Story" provides a nostalgic, if offbeat, look at holiday traditions in the upper midwest. Ralphie, a pre-teen with an active imagination, wants nothing more than a Red Ryder BB gun for Christmas, but everyone keeps telling him he’ll shoot his eye out. Suspect behavior like using a curse word in front of The Old Man (his father) and getting into a fight aren’t helping his cause.

With an exceptionally colorful vocabulary, The Old Man is constantly fighting with the furnace and the neighbor’s dogs, while Ralphie’s smart, underappreciated mom is constantly inventing ways to get little brother Randy to eat. Basically, the family lives as best they can on an over-stretched budget and a good sense of humor. Unexpected calamities and everyday mishaps threaten the family’s holiday traditions and the neighbor’s dogs and neighborhood bully Scut Farkas are lurking around every corner. But this is a feel good holiday story, so things turn out pretty well for everyone.

As narrator and grown up Ralph, Ted Deasy is charming, if occasionally a bit contrived and over earnest. Frequently talking directly to the audience he fills in story gaps with a fond smile and a genuinely likeable tone to his voice. Laurel Casillo is vivacious and warm as Mother, her expressions and gestures in response to The Old Man are nicely comic touches that still radiate with affection. Spencer Slavik is appropriately petulant and whiny as Randy and he does a good job of unobtrusively sneaking into place under various pieces of furniture. Charlie Mathis is wonderfully animated and enthusiastic as young Ralphie. His fantasy scenes are a highlight of the very fun show, as is the physical comedy and sharp timing of Brad Fraizer as The Old Man.

“A Christmas Story” is meant to make people laugh and have a good, nostalgic time. The only over-arching message is to hold on to those memories and people and to make new similar memories while you can. The omnipresence of Deasy reminds us that these moments are fleeting, the open arms and welcoming smile of Casillo provides the hug of reinforcement that makes the show so inviting an escape. The play celebrates tradition and family, with a nod to the season, without being preachy or filled with treacle and sentimentality; and the Rep does a spectacular job with this upbeat, laugh-filled holiday favorite.

Personally, I would like more active scenes, rather than narration. The pantomimes and tableau pieces are well executed, but the story lags in energy at times when there could be action. This is attributed to the script, and the Rep’s production succeeds in conveying the sense of the movie and delivering a very entertaining show that’s suitable for all-audiences. And I noticed and appreciate the way the script and the Rep resolve the issue of Christmas dinner while avoiding offensive stereotypes.

Other than that necessary adjustment, the play stays true to the movie and every scene is played for laughs. Frazier gets high marks for physical comedy. He jumps around with furious, eager excess when he goes to deal with the furnace and makes sure the audience members “see” the neighbor’s dogs through his scrambling movements and big expressions even though they never appear on stage. Mathis and Deasy are similarly animated and engaging when Ralphie imagines himself as the hero in numerous adventures with his trusty, new rifle. The contrast between those fantasies and the reality of the first time Ralphie fires the gun is perfectly balanced, with a fitting lack of irony and another hug from Cassillo.

“A Christmas Story,” continuing at The Rep through December 23, is a family-friendly show with a touch of comic excess and I enjoyed this play better than the musical version. The cast is friendly and inviting and the story a humorous reflection of a time when the narrator’s life was carefree and his only worry was if he would get the coveted Red-Ryder BB gun for Christmas. While the memory is specific, the feeling of hope and the trials and tribulations of being a kid are something every audience member can tap into and enjoy.