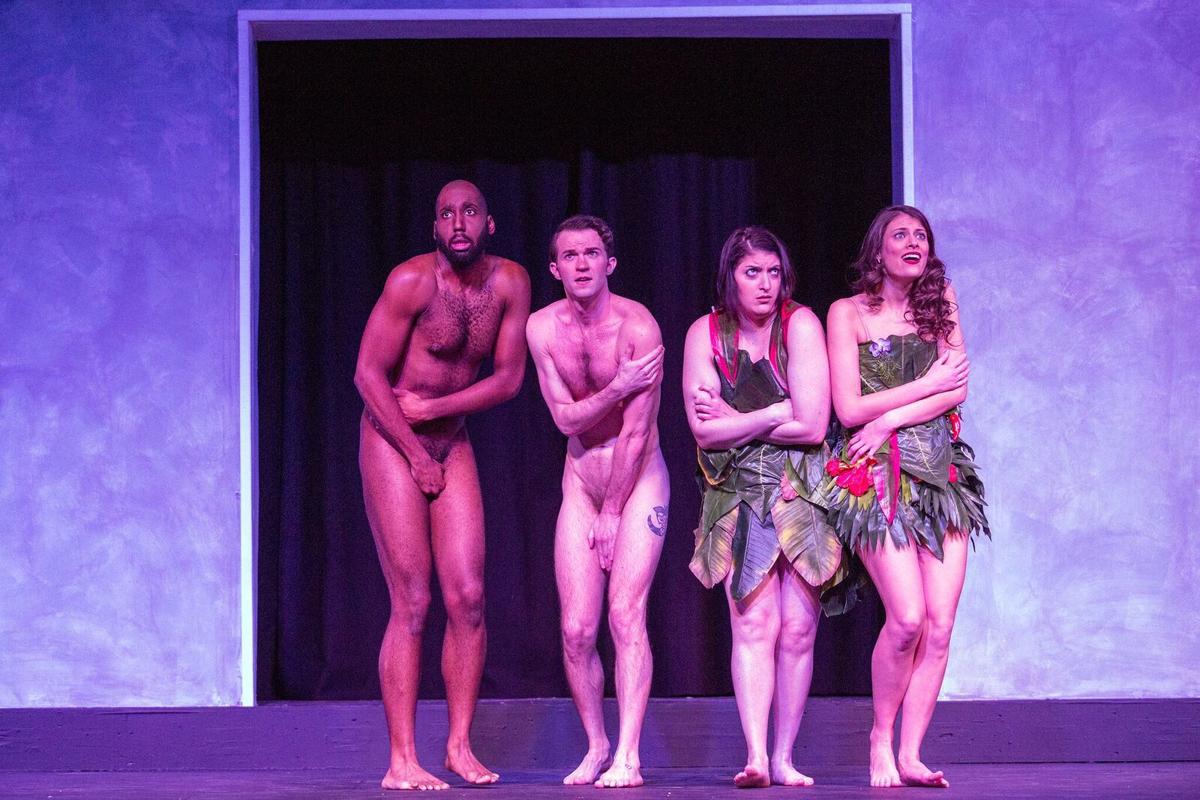 Stray Dog Theatre brightens up the holiday season with a laugh out loud funny show that presents an alternate version of the creation of the world and the progression of humankind from Adam through contemporary America. Proving there really is theater for everyone, even at Christmastime, "The Most Fabulous Story Ever Told" is filled with joy as well as messages of love and acceptance. The story may be told from a new viewpoint, but the truths about humanity and our need for community and faith ring through with clarity.

Paul Rudnick’s irreverent retelling is an exploration of our beliefs that values the lessons but looks at them with a perspective that’s decidedly and comfortably not hetero-normative. The funny play covers a lot of time and history, but director Justin Been and narrator and Stage Manager Patrice Foster keep the cast and audience focused on the story and the action zips along at an engaging pace. There’s also an abundance of sharp humor, some reframing of Biblical tales and a few brief glimpses of full frontal nudity.

The play starts at the beginning, as Foster’s soothing voice guides us through the story of creation accompanied by a video montage that emphasizes the beauty and variety of the natural world. The combination of Foster’s gentle and mellifluous narration and the gorgeous images is evocative, emotional and abruptly – and humorously – interrupted by the introduction of Luke Steingruby, as Adam. Curious and questioning by nature, he loves the garden but is lonely for a companion. After a beat, in walks Steve. There’s a little flirtation, a rather frank discussion of sexual practices and some happy coupling until Adam’s inquisitive nature gets everyone kicked out of the Garden of Eden. The basic story is likely quite familiar to most audience members.

What’s not so familiar are Adam and Steve and Jane and Mabel, two gay couples, as our primary guides through highlights of the Old Testament and into modernity, where they must deal with AIDS, a difficult pregnancy and contemporary politics. The show is funny and fascinating and thoroughly human. Several supporting characters jump up from the audience to question the authority of the script, and theater patrons who take a biblically literal approach to history are likely to be offended, but the storytelling is compelling and persuasive and the performances are rich in detail and character.

Steingruby turns in his best performance to date as Adam and it’s completely captivating. He is emotionally connected to each moment, creating a multifaceted man who embraces his masculine and feminine qualities with humor, persistence and grace. Steingruby has great chemistry with William Humphrey’s Steve and Angela Bubash’s Mabel as well as a comic rivalry with Maria Bartolotta’s Jane, a formidable character made thoroughly likeable by Bartolotta. A talented ensemble featuring Jeremy Goldmeier, Jennelle Gilreath, Stephen Henley and Dawn Schmid, provides solid support and, while the show is provocative, it’s also incredibly funny and charmingly upbeat, even when life is difficult.

The first act is decidedly more imaginative, sticking close to Biblical stories, but adding their own twist, one of the most interesting of which is the reconciliation of Adam and Steve at the birth of Jesus. Their comparison of gifts for the baby Messiah is stereotypically funny without being mean or sacrilegious. The second act turns more serious as both couples must deal the fragility and uncertainty of life. Steingruby and Humphrey are sympathetic as they put a brave face on chronic illness, while Bartolotta and Bubash resonate as a couple trying again after an unexpected tragedy. Every actor is fully committed to their character, and Bartolotta is particularly fearless in her approach, whether she’s challenging the patriarchy or comforting her anxious spouse.

There’s so much hope and possibility in the first act that the reality of the second act feels quite heavy, though half the characters are dressed for fetish night at the local club and ripe with snappy comebacks. Still, even in the most difficult scenes, ideas of lasting love, community and the power of faith, particularly faith in each other as the living embodiment of God, shines through, offering a beacon of hope for all of us.

If you’re looking for a traditional Bible story, this is not your show. “The Most Fabulous Story Ever Told,” is, however, an oddly refreshing alternative to traditional holiday fare that delivers the kind, hopeful messages audiences crave during the Christmas season. Intended for mature audiences, and continuing through December 22, Stray Dog Theatre once again finds a different perspective to challenge our thinking while still delivering a heart warming, if comically twisted, tale.