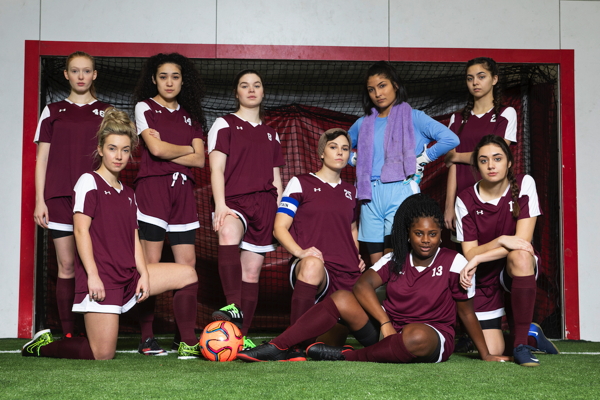 'The Wolves' score big at the Rep

What a refreshing, invigorating night! I've just seen the opening night of "The Wolves" at the Rep Studio Theater. I'm used to exciting things in that studio program, but The Wolves is unique and wonderfully satisfying. It brings us into the world of a girls' high-school soccer team over several weeks as they warm up before their Saturday matches.

The play is by Sarah DeLappe, who wrote it while the ink was still wet on her MFA in playwriting--and it's won many awards including nomination for a Pullitzer Prize.

We meet nine girls--all sixteen or seventeen--and though they are identified only by their jersey numbers each is a distinct personality. They beautifully embody the poignant variety that one finds among high-school juniors--the shy, the outgoing, the brave, the hesitant, the quiet, the talky, the naïve, the (just barely) worldly.

They chat as they do their stretches and kicks. These are such real people! In their banter we hear talk of boy-friends and of Cambodian genocide, of Hobbits and of concussions, of birdwatching and of what once was called "feminine hygiene". This is not stereotyped teeny gossip; these girls are honestly curious about the world. There are teases and taunts, camaraderie and competition, envy and anger and grief and love.

And these girls--these young women-- Well, we see them maturing from girls to women as each becomes a bit more aware of who she is and what it means to commit to a dedicated group.

Sarah DeLappe has a fine ear for dialogue--especially adolescent dialogue. The sometimes overlapping chatter attains a musical quality--and it is so realistic.

This play is wonderfully free of anything that could be called a "theme". It is not about anything but real people. Though it has an all female cast it is not feminist; though the topics are mentioned it is not about genocide or sexual aggression or gender preference or reproductive choice or acceptance of foreigners. It is not even about soccer. It is neither opportunistic nor trendy. It is simply a very good play in which we are allowed to share intimate moments in the lives of young people as they work together and learn about each other--and themselves--and the world--in that stressful transition from child to adult.

The wonderful cast includes six students from the Webster Conservatory and three outsiders:

Add to these a St. Louis favorite, Nancy Bell, as a Soccer Mom who appears near the end. Her daughter was killed in a traffic accident yet Mom comes to support the team at their next game. She is so gripped by grief that all she can offer the girls is an almost surrealistic rant against teen habits of speech. Director Melissa Rain Anderson has done marvelous work in this intricately complex piece.

And the sheer physical marvels this team performs! In almost constant warm-up activity they do near-contortionist stretches, high-stepping runs, a "spider web" exercise rapidly kick-passing the ball between points on a circle. In one merry exercise the girls recite, in rhythm, the Preamble to the Constitution as they kick the ball back and forth. And most astonishing of all is a solo by Mary Katherine Harris: a lightning-fast dance around the soccer ball, skipping, toe-touching, all the while singing a made-up song about "Yogurt". It's very like a speeded-up Scottish sword dance. Amazing! Much praise goes to athletic trainer Lori Khazen, who coached these girls into a most impressive soccer team.

It's a warm delight that should not be missed". You'll want to join in as the team ends the night with a huddle, a joyous shout, "WE ARE THE WOLVES!", and a thrilling howl to the moon. It's 'The Wolves' in the Studio Theater at the St. Louis Rep. It runs through February 3.