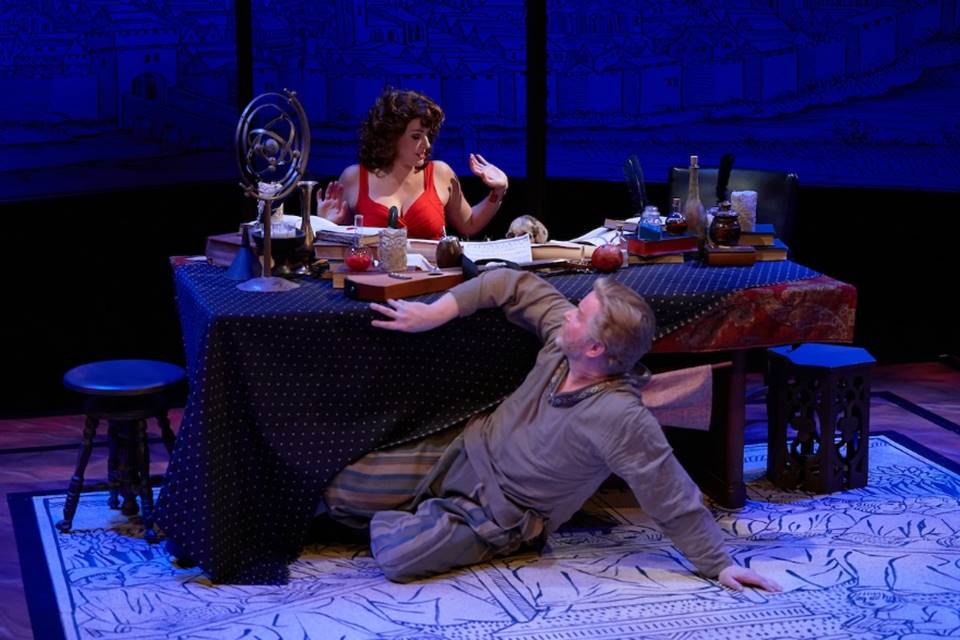 The Upstream Theater has opened a lovely production of "Wittenberg" by David Davalos. It is a "tragical-comical-historical play", a genre first mentioned by Polonius and rarely seen thereafter. (I guess Stoppard's Rosencrantz and Guildenstern are Dead would fill the bill.) Here in Wittenberg we meet two great figures, Martin Luther and Dr. John Faustus, both professors at the University. Attending their lectures is an ardent young Danish student, Hamlet.

Now Luther is well documented in history; he did teach at Wittenberg where he supposedly posted his ninety-five theses on the church door. History is not so clear on Faustus; Marlowe, Goethe, Gounod and others have rendered him half-mythological. But he was in fact real. He was not only a necromancer, alchemist, astrologer, physician and probably charlatan--but he too was a professor at Wittenberg--his life neatly contemporary with that of Luther. So it no more stretches our credulity to see these two as academic colleagues than does David Ives in placing Picasso and Einstein together in the Lapin Agile in 1904. And as for the fictional Hamlet? Well, he definitely studied at Wittenberg, and Shakespeare is pretty vague about the time setting for his play, so the Prince of Denmark is perfectly welcome here, just as Elvis is welcome in the Lapin Agile.

We are treated to an extended debate between the two professors on an eternal human question: faith vs. reason. To Luther faith was all--the only path to our salvation; to Faust all things were possible with reason alone.

Two radical documents raise the temperature of the argument: Luther's "Disputation on the Power of Indulgences" (his 95 Theses) and Copernicus's "On the Revolutions of the Heavenly Spheres," which upset the Ptolemaic (and Biblical) system of the universe.

Hamlet is earnestly learning, but mostly he is picking up dozens of phrases and tropes that he will later use on the stage of The Globe. He's also learning tennis. There is a touch of the classic English twit to this Hamlet.

The play trots merrily along interleaving the philosophical talk with lots of rather low humor. Luther's famous chronic constipation is a running gag. And a number of our groundlings burst out in raucous guffaws whenever they recognized a quote from Shakespeare in the mouth of Faust or Luther; for others in the audience this sort of gag got a little old. In the brash mixture of contemporary idiom and faux Elizabethan syntax there is a distinct flavor of Magic Smoking Monkey. A few times Steve Isom, as Faust, sings rather modern songs while strumming an ancient -- what? -- dulcimer? Ukelele? In one scene Faust leads Hamlet through an amusing--and rather telling word association game.

Yeoman's work is done by the whole cast. Alan Knoll plays this great divine with all the flair with which he portrayed THE great Divine last December in "An Act of God," and Isom is smart and confident as Faust. Both actors, however, seemed just a little too aware that what they were saying was funny. That's never wise in a comedy.

Somehow the serious philosophical question navigates safely through this storm of comedy to touch our modern lives. Faith or Reason? Which is the firmest rock? And yet one must always ask, "What if it's wrong?" (I'd always placed my faith in causality--until quantum physics reared its ugly head.)

The set by Michael Heil, costumes by Laura Hanson and properties by Rachel Tibbets are all beautiful and appropriately period. Very effective lighting is by Steve Carmichael and director Philip Boehm gives us a most evocative sound design.

Wittenberg plays at the Kranzberg through February 10.