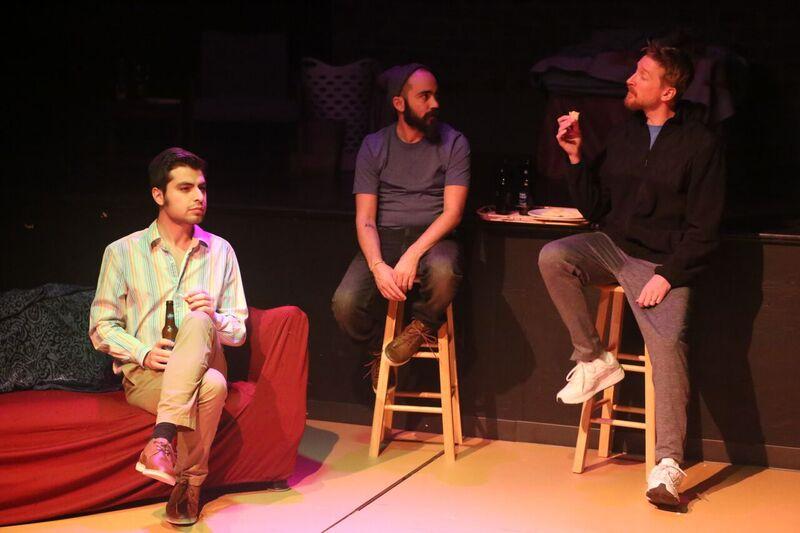 A darkly brilliant drama, ‘The Motherf**ker with the Hat’ is unexpectedly satisfying

R-S Theatrics once again surprises and delights audiences, this time with a gritty look at love and addiction that strikes a deep chord of truth. “The Motherf**ker with the Hat,” by acclaimed playwright Stephen Adly Guirgis, is full of lies, half-truths, darkly relevant humor and painfully genuine characters.

Shortly after his release from prison, recovering addict Jackie bursts in to the apartment he shares with his girlfriend Veronica carrying a bouquet of flowers. He’s almost giddy with optimism after getting a new job and the two laugh and playfully tease each other. But Jackie’s mood turns dark and suspicious when he spies a man’s fedora hat on the kitchen table. Though he tries to let go, he spirals downward as jealousy overcomes him, and he makes one poor decision after another as he wrestles with the possibility that Veronica is unfaithful. There’s a genuine connection between Veronica and Jackie, but it may not be strong enough to take on their demons.

A fully connected cast and strong direction by Carl Overly, Jr. keep the pace relentless, leaving the audience on the edge of their seats eagerly anticipating the next twisted turn of events. Adam Flores is ecstatic, obsessive, passionate, angry, surprisingly sympathetic and completely captivating as Jackie. He seamlessly moves through a myriad of emotions, rationalizations and violent impulses, drawing us in even as we watch nervously, waiting for the other shoe to drop. A fiery Sofia Lidia matches his intensity as girlfriend Veronica, but she’s still using, a point of contention between Jackie and his sponsor Ralph, played with smarmy, self-serving platitudes by Aaron Dowd. Taleesha Caturah pulls no punches as Ralph’s wife Victoria and Jessie Muñoz is brutally honest but loyal to a fault as Jackie’s cultured and successful cousin Julio.

The characters resonate with truth, but it isn’t always pretty. And none of them are completely innocent bystanders, though the endearing Julio is clearly acting out of love and genuine concern. Internal and external conflict builds as Jackie struggles to keep his jealousy and relationships from destroying his tenuous sobriety. He is too trusting and inherently kind for his own good, but when he’s hurting he lashes out with vicious ferocity without considering the consequences. The audience is never quite sure how far he will go or how unhinged he may become. Still there’s a tenderness to his character that reveals itself as hopeful, guardedly optimistic and convincingly likeable.

Jackie is the perfect prey for the opportunistic Ralph and his manipulative wife, and a perfect jerk to his cousin Julio – the only person in his life who consistently has his back. Social context and realistic circumstances add to the visceral punch of the relentless drama, though the script sprinkles in dark comedy to break the tension.

The two-level set, designed by Taylor Gruenloh, emphasizes the struggling working class world in which the characters live. The furniture is secondhand, mismatched and a little shabby, but not derelict, and small changes quickly establish locations outside the couple’s apartment. The lighting and costumes, by Todd Schaefer and Christina Rios, add to the overall tone of the show while the sound, by Mark Kelly, is contemporary and frequently hard-driving, reflecting the mounting tension and Jackie’s manic energy. On the surface, everything seems relatively normal, but a little damaged, reinforcing the sense that Jackie is just barely hanging on to his senses and sobriety.

America is in an acknowledged opioid crisis, and one would be hard pressed to find someone whose life hasn’t been touched by an addiction-related tragedy. “The Motherf**ker with the Hat” pointedly demonstrates the debilitating effect on those caught in addiction’s grip while quietly celebrating the human capacity for resilience and persistence. Guirgis’ powerful script reminds us how selfish and cruel humans can be in a way that, quite unexpectedly, resonates with sympathy and unexpected hope.

The frighteningly realistic drama is raw and disturbing, with beautifully flawed individuals struggling to find comfort, and longing for so much more. At times reminiscent of classic American tragedies like “Whose Afraid of Virginia Woolf” and “A Streetcar Named Desire,” it is the leading characters’ passions and dependencies that ultimately make them so intriguing, and their story so mesmerizing.

“The Motherf**ker with the Hat,” an R-S Theatrics production continuing through February 10, contains strong language, as well as themes and subject matter not suitable for children. There’s a poignant sorrow to the characters’ circumstances, however, and some audience members will undoubtedly be disturbed by a creeping realization that this story is too real, too close to home. The result is an astounding and hard-hitting show with convincing performances that resonate with authenticity and the lure of hope. Mature audiences looking for a contemporary story delivered by flawed but compelling characters are likely to be transfixed by this thoroughly engrossing drama.