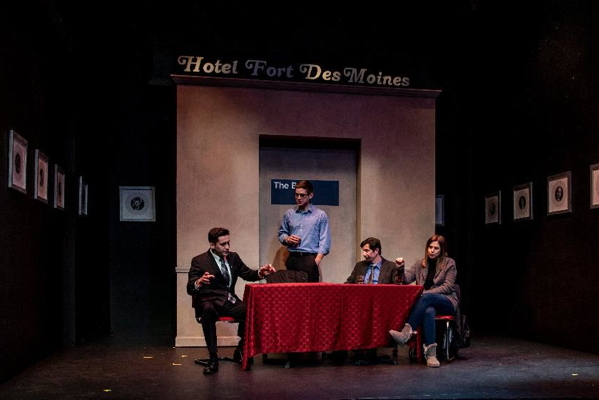 'Farragut North' proves that trust, loyalty and politics are a volatile mix

The American experiment in democracy is nearly 250 years old. As recent history may suggest, that doesn't mean that we've worked out all the problems. Particularly during the early primaries and especially not in the Iowa caucuses. When it comes to the people who run the campaigns, the staff behind the candidate, the waters are even murkier.

St. Louis Actors' Studio's production of "Farragut North" shows us the seedy underbelly of politics in a fast moving, if slightly dated, script by Beau Willimon that reminds us just how easily people can be manipulated and how quickly the tide turns against you. Strong performances, a sparse stage that suggests a dingy, commuter hotel and sharply focused dialogue under the direction of Wayne Salomon keep the tension building in this unraveling political drama.

Stephen Bellamy, in another unsettled and thoroughly engrossing performance by Spencer Sickmann, is the hot shot political operative for the democrats in 2008. He feels confidant that his candidate is positioned to sweep the caucuses and steamroll to the party nomination. His boss Paul Zara, a charmingly dispeptic operative played with dry humor by David Wassilak, agrees.

That is until rival operative Tom Duffy, a menacing but persuasive Peter Mayer, who adds just the right amount of bravado and scenery chewing to the juicy roll, reveals that Bellamy's candidate isn't going to get the endorsement he expects and that he has purposefully skewed the polls to give Bellamy and Zara false confidence. Seemingly out of nowhere, we've got the makings of a satisfying political drama.

Upping the tension are Joshua Parrack as Ben, an ambitious speech writer with an unassuming but ready to pounce demeanor; Shannon Nara as the fast-talking newshound Ida, a reporter with hard-won swagger and a thirst for the inside scoop; and Hollyn Gayle as Molly, a teen-aged political junkie with a thing for older men. These small but well-defined characters add interesting layers to this tangled story.

Finally, Luis Aguilar has a telling scene as a waiter facing troubled times. He represents the common citizen and Bellamy seems the only character who actually sees him as a person. It's a lovely, authentic moment that hints at Bellamy's struggle to balance his humanity with the cutthroat nature of a political campaign, but it may come too late to help the operative regain his footing.

Bellamy has an air of desperation from the opening moments, as if the 20-something character feels he's already peaked. His emotions start at an 8, but Sickmann and Salomon find new levels of turmoil that leave Bellamy twisting in the wind and the audience on the edge of their seats, nervously anticipating each turn of events. Something is bound to break here, and if he doesn't play his cards right, that something just might be Bellamy.

Zara preaches loyalty, then proves lacking time and again. As an operative for the opponent, Duffy isn't trustworthy, but his predictions keep proving true. Ida wants the scoop, and doesn't much care who gets hurt along the way. Ben wants Bellamy's job and carefully positions himself to avoid the fallout while remaining close enough to step in. While it's never clear what Molly wants beyond older men, she too becomes a casualty of the political gamesmanship. When all is said and done, Bellamy may actually be the most straightforward character in the play, which is likely his fatal flaw.

Salomon and the cast have crafted a taut show that keeps raising the stakes and drawing the audience into its web. While you may feel a bit sleazy watching, it's impossible to turn away from the unfolding drama. Egos are big, compromise is unlikely and loyalty may be a commodity, ensuring "Farragut North," continuing through February 24th, will keep you enthralled until the final domino falls.