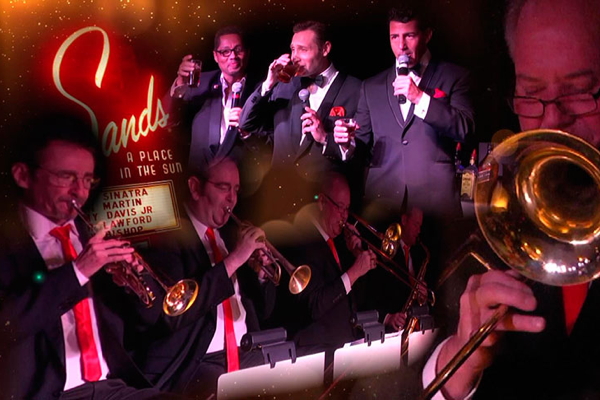 The Fabulous Fox Theatre hosted the touring production of "The Rat Pack Is Back," February 22 -- 24 and the aisles were swinging and swaying to faithful interpretations of beloved songs like "Fly Me to the Moon," "Luck Be A Lady," "That's Amore," "Volare," "The Candy Man" and "Me and My Shadow." The vibe was pure Vegas cabaret and the drinks, jokes and songs were flowing with an easy banter that successfully recreates the sense of the original Rat Pack in the hedonistic middle of its decades-long popularity.

Frank Sinatra, played with a soft touch and all the right gestures by Chris Jason, kicks off the show. He's suave but personable, and the only thing that would make his entrance more perfect would be if he wore a hat he casually tossed off as he grabbed his first drink and a smoke. Though he doesn't quite resemble Sinatra, he's got the moves down and his voice and phrasing credibly evoke Old Blue Eyes.

Drew Anthony is impeccable as Dean Martin, from the curl in his hair and drink in his hand to the double entendres and playful lyric switch ups. His resemblance to Martin is uncanny and his voice is smooth, mellifluous and occasionally slurred, with a tone that closely matches the still popular singer's style and sound. He also has frequent humorous and flirtatious exchanges with audience members, demonstrating that Anthony is quite comfortable in the role of the boozing, schmoozing sidekick.

As Sammy Davis, Jr., Kenny Jones is noticeably taller than the diminutive but talented singer and dancer who was the affectionate butt of many jokes. Jones captures the singer's patois and he's clearly an accomplished dancer, ensuring he's convincing and vibrant in the role. But jokes about his sexual preferences and the choice of "Mr. Bojangles" as his featured solo quickly remind us that these gentlemen are out of place in contemporary American life. The inclusion of the Barbie the Bunny schtick and a few odd attempts to insert current pop culture references only serve to underscore just how out of sync the Rat Pack would be in 2019.

The dated jokes, defiantly nonchalant and teeming with overt sexism, racism and generally unacceptable behavior, fit the characters and their time. As an audience member, I would prefer more songs and less banter, however, even if that's not specifically true to the performances the actors are emulating. I grew up listening to my grandparent's recordings of the music, not seeing their shows, and that's what I most want when I go to see "The Rat Pack."

Musical revues offer younger audiences and those who care to reminisce an opportunity to experience live renditions of bygone stars and eras, in this case the uptempo sounds of the post World War II, pre-Rock and Roll period. Fans of the legendary crooner Frank Sinatra and his close friends Dean Martin and Sammy Davis, Jr., as well as anyone who appreciates the stylized vocals and exuberance of the era, are sure to enjoy this swanky production complete with live 12-piece ensemble and a genial bandleader.

This is not the first visit through St. Louis for "The Rat Pack Is Back," and the actors obviously possess the talent to convincingly convey these larger than life personas. Though some bawdy, suggestive humor is essential to the show, I encourage the ensemble to consider adding more songs and lessening the outdated comedy routines. Current fans will still enjoy the approach and newer, less familiar audiences may be more inclined to appreciate the fabulous music and memorable performances.