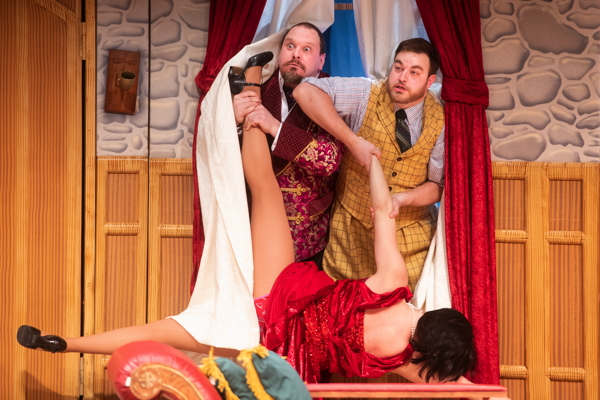 The Repertory Theatre has opened a hit farce, "The Play That Goes Wrong"-- while its national tour is still running! This is an unprecedented coup for the Rep. Performance rights are never granted while the tour of a show is running.

"The Play That Goes Wrong" is simply that: we watch the opening night of a college drama society's production of Murder at Haversham Manor and everything goes wrong. The door won't stay shut--or it opens when it shouldn't; the fireplace mantle won't stay put; pictures and ornaments fall off the wall at the most inopportune times; props are missing--or comically wrong. The body won't stay dead. (So, what's a corpse supposed to do when somebody walks on his hand?) And when the stretcher rips open and deposits the body on the floor? Well, it's up to the deceased to get himself off stage discretely.

The always-impressive technical resources at the Rep are on full display in a set that features endless gimmickry and secret tricks. Set designers Peter and Margery Spack always show wonderful skill and imagination in their work, but here the script burdens them not just with ordinary design challenges, but with real engineering challenges as well. Near the end of the show the entire upper story collapses--in three stages--leaving the actors scrambling to save themselves (and the furniture) from crashing onto the stage below. In the final moment the entire set collapses onto and around the cast. The stage crew performs superbly; I got the impression that every single thing went wrong exactly as it was supposed to.

Farce is technically the most difficult form of theater, and low farce--slapstick farce, like this one--is the most difficult kind of farce. The cast at the Rep are intensely energetic, intensely disciplined and occasionally quite athletic in portraying (and surviving) all their various injuries and embarrassments. Again and again people are bashed in the face with an opening door or bonked by a flipping floorboard or knocked against a window-frame or a pillar. There are pratfalls aplenty. Unlike the Three Stooges, in live theatre you don't get second takes; so occasionally we see that a hand was not really stepped on, a foot not really stomped on, but for the most part all this physical assault is pretty convincing.

The valiant cast all do splendid work (and surprisingly they've survived rehearsals without visible bruises). They include:

"The Play That Goes Wrong" is a barrel of laughs but, let's face it, the laughs are all pretty cheap. Some are simply nonsensical and artificial, like the time when Cecil is trying to replace two fallen things onto the wall. He tries to answer the phone with his foot and pass it to Thomas, who is similarly occupied. Any real person would simply set down the items, answer the phone and get on with the scene.

Gags are endlessly repeated. When the sherry is replaced with a jug of paint thinner the filling of glasses and the resulting spit-takes are repeated again and again and again. (Well, if one swig of thinner is funny then fifteen must be hilarious!)

And there's just not enough at stake. It's a college production. No careers or marriages or companies are in jeopardy.

But the fundamental problem with this script is that for the most part we are just watching accidents happen. Now we all love to do that; everybody loves a train-wreck, but that doesn't make it theater. Theater is about human interaction. The protagonist in a play is the person whose desires motivate the dramatic action. In "The Play That Goes Wrong" the set itself is the protagonist. Unlike "Noises Off," here we know nothing about these college actors and their off-stage relationships. Only once do we see a really human conflict. When Sandra is knocked out the Stage Manager is drafted to play the role, and she gets to like it. When Sandra comes to there's a fierce struggle between the women over who should play Florence. And the show really comes to life.

Overall the humor is barely sophomoric. The play might have been written by clever twelve-year olds--and farce should never be entrusted to the young. This play was in fact written by three very young men--Henry Lewis, Jonathan Sayer and Henry Shields, who met at LAMDA, the London Academy of Dramatic Arts. This is their first play, and it won the Olivier Award for Best Comedy. They have since written "Peter Pan Goes Wrong," "A Christmas Carol Goes Wrong," and "The Bank Robbery That Goes Wrong." They are currently at work with Penn and Teller on "Magic Goes Wrong," which will open this fall. Looks like a franchise.

Now when Sibelius wrote his violin concerto he and the world saw that it was simply perfect. He had no need to write another.

When Michael Frayn wrote his sex farce "Noises Off" he and the world realized that it was simply perfect. He has no need to write another.

But Lewis, Sayer and Shields keep pumping out variants of their first success. Are they striving to attain perfection? Or, having realized the truth in what H. L. Mencken said about the way in which "nobody ever went broke", are they simply busy shoveling in the money?

"The Play That Goes Wrong" continues at the Rep through April 7. Bring the kids. They'll love it.