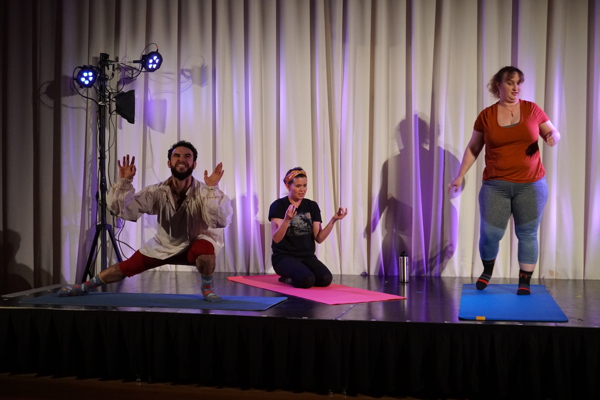 Slightly Askew Theatre Ensemble's (SATE's) third annual "Aphra Behn Emerging Artists Festival" continues the company's commitment to developing the talents of women artists in all aspects of creation and production. This year's festival (March 15-17, 2019) was even more polished, and the scripts presented more fully realized, than the first two years, solidifying SATE's reputation as a company that continues to attract and develop some of the area's most promising talent.

The three shows were presented in two acts, with Delaney Piggins' "Burden Of Proof" the first act and JM Chambers' "Intervals" and E. K. Doolin's "V" the second act. Each show proves itself well crafted. Though the style and dialogue of each is distinct, the stories are individually cathartic and complete, allowing audience members to comfortably move to the next play while still providing ideas to reflect upon at a later time. Additionally, the split works well, providing a brief break after the intense and purposefully unresolved ending of the first play.

"Burden of Proof," directed by Kristen Strom with a determined but not shocking approach, casts an intentionally broad net then pulls the rope right around the script's essential questions. We are introduced to three young women, from the same small town, who are carpooling home from college to testify about their individual relationships with a former teacher. Despite the obvious tension, each girl presents her perspective of her encounter or relationship with the teacher, and this is where the story explodes with nuance and uncertainty that really captivates.

Joan, an articulate jumble of conflicted ambiguity delivered with certainty in a strong performance by Samantha Auch, is the first driver. We presume they are in her car as she first picks up the younger Cassie. A girl with a heartbreaking lack of family sympathy or legal support, Sophie Murk finds pathos in the potentially grating character. Finally, they pick up graduate student and teaching assistant Kay, a quietly forceful and intelligent Maya Kelch. The story occasionally flashes forward to the women's testimony, and the jumps are at times disruptive, but the story grabs you. It's an invigorating discomfort that deserves thought, and I'd like to see this show expanded to a second act so that the full story can unfold.

Jeanitta Perkins directs "Intervals" with a commitment to storytelling and sensitivity to the struggle for survival and human dignity each character's challenge represents. The revised script retains the three-character focus, but adds framing that establishes Lanie as the narrator and creator to strengthen the connection between the audience and actors. The combination of thoughtful direction and strong performances from Madelyn Boyne, as Lanie, Chris Ware as single father Eric, both members of the homeless working class, and Vicky Chen as Hayley, a homeless high school teen living from shelter to van with her working parents.

Lanie mostly lives out of her car, and she uses her phone's video capabilities and a selfie stick to document her journey into and out of homelessness. There's an everywoman sensibility to Boyne's performance that resonates as intellectually and emotionally authentic, and she's more matter of fact and stoically hopeful than dramatic. Lanie is persistently curious, always trying to understand how she -- and so many other working individuals and families -- could end up "this way."

As Eric, Ware's desire to ensure his daughter is living in a stable home situation, currently with his parents, radiates through his performance. Chen is sympathetic and genuine as the high school student. The way she tires of having to work so hard to keep her homelessness hidden from her classmates weighs on her emotionally and physically. You want for her family, and for Lanie and Eric, to succeed. What the new framing does best is to create hope from the audience, and the buzz is almost palpable by the end of the short play.

"V" is the final and shortest piece of the three, directed by Lana Dvorak with the captivating Morgan Maul-Smith as yoga student Veronica. As she practices yoga one day, she's joined by the chameleon-like Ryan Lawson-Maeske, as Voltaire, and droll Kelly Howe as Van Gogh, two of Veronica's literary icons come to all-too-realistic life.

With a touch of hyper-reality, Veronica finds her heroes are completely flawed in ways all too familiar. Voltaire is constantly in pursuit of sex, Van Gogh, a little deaf and a little (ok, a lot) gassy.

The script is memorable, but more of a satirical sketch than a short play. The consequences are lovably hilarious, and the audience enjoyment builds and then giggles over and the characters revelations increasingly comic and yet slightly, nostalgically, sad. Not to the point of being poignant, mind you, but funny, with an asterisk of pity.

Piggins, Chambers and Doolin, each an up and coming playwright, demonstrate a strong grasp of the technical and dramatic nature of storytelling and are encouraged to produce more scripts. Directors Storm, Perkins and Dvorak, as well as SATE, are to be congratulated for presenting compelling, cathartic stories that may linger in audience members' thoughts and conversations. New artistic work that springs from and reflects our city's collective realities and creative consciousness deserves to be celebrated and championed. St. Louis is fortunate to have a number of companies, including SATE, that consistently commit to developing new work and talent.