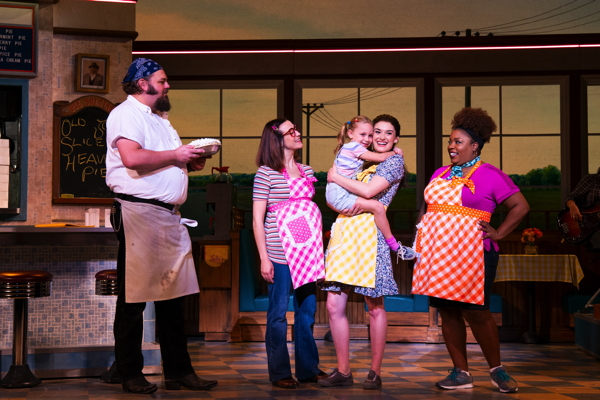 ‘Waitress’ is a warm and tasty slice of ‘she’s messy, but kind’ pie

The touring production of the hit musical "Waitress" introduces audiences to Jenna, a young woman in an unhappy and abusive marriage who works out her frustrations and emotions by making pies. Delicious pies, with whimsical, inventive names, that are the main attraction at the diner where she bakes and waits tables.

Jenna's been wrestling with the idea of leaving her husband Earl, though she usually ends up giving in to his demands. Unfortunately, her world is turned upside down when she discovers she's pregnant. An upcoming contest with a $20,000 prize gives her hope for a way out, while an affair with the town's new doctor shows her that love isn't always pain and abuse, though it can be complicated.

Christine Dwyer is radiant as Jenna, the girl who's "messy but kind," with a wry sense of humor and slowly emerging self confidence. Dwyer has a likeable, relatable presence and her relationships, decisions and working class life are realistically flawed. She finds support, friendship and fabulous harmonies with her fellow coworkers Ephiee Aardema, as Dawn, and Maiesha McQueen, as Becky, and there's plenty of spark between her and Steve Good's Dr. Pomatter.

Ryan G. Duncan, as Cal the diner's cook and manager, adds a comic touch to a fairly stock character, while Richard Kline, as Joe, the curmudgeonly owner of the diner and several local businesses, has a soft spot for Jenna. Jeremy Morris and Dawn Bless are memorable in the supporting cast, with Morris stealing several scenes as fellow waitress Dawn's enthusiastic paramour Ogie.

Jenna and her friends are each dealing with their own issues and Dwyer, Aardema and McQueen are occasionally insensitive, but more often kind, supportive and thoroughly believable. The characters and world of "Waitress" are easily recognizable and the situations sympathetic, and it's this realism that really helps the show resonate, though the production admittedly romanticizes the struggle at times.

The show also has a strong under current of abuse and control that cannot be overlooked. While we don't see Earl strike Jenna, we come alarmingly close and his verbal and emotional abuses are on full display from his first scene to the last. Matt DeAngelis ensures his character is grounded in reality, and only 85% monster, creating genuinely uncomfortable moments of concern for Jenna. In memory scenes we learn that Jenna's mom, an evocative Lulu Lloyd, was abused and baking was how she tried to protect her little girl from her harsh father.

Jenna, in turn, married an abusive, selfish man, accepting her fate with a resigned sigh, but without becoming bitter. When her daughter is born, Jenna realizes she must make a move if she's going to break the cycle of abuse. The scene is powerful without being overplayed. Her life hasn't been easy, but Jenna's always found comfort in the act of baking pies - they may also provide salvation and a second chance for her and her baby.

The Sara Bareilles score provides tone and emotional depth, from the hauntingly ethereal "What's Inside" and the seductive "It Only Takes a Taste" to the humor in "Never Getting Rid of Me" and "Bad Idea" to the hopeful refrain of "Everything Changes." The songs effectively chronicle Jenna's life and are complemented by an onstage band, simple but pleasant choreography and an inventive set that adds the finishing touches to this thoroughly enjoyable musical.

The beauty of "Waitress," continuing through April 7 at the Fabulous Fox Theatre, is in its portrayal of real life, filled with real people doing their best from day to day and trying to find a little happiness in their struggles. The performances are compelling, the songs are varied and emotionally resonant and there's an authenticity and warmth to the story that lingers long after the last pie comes out of the oven.