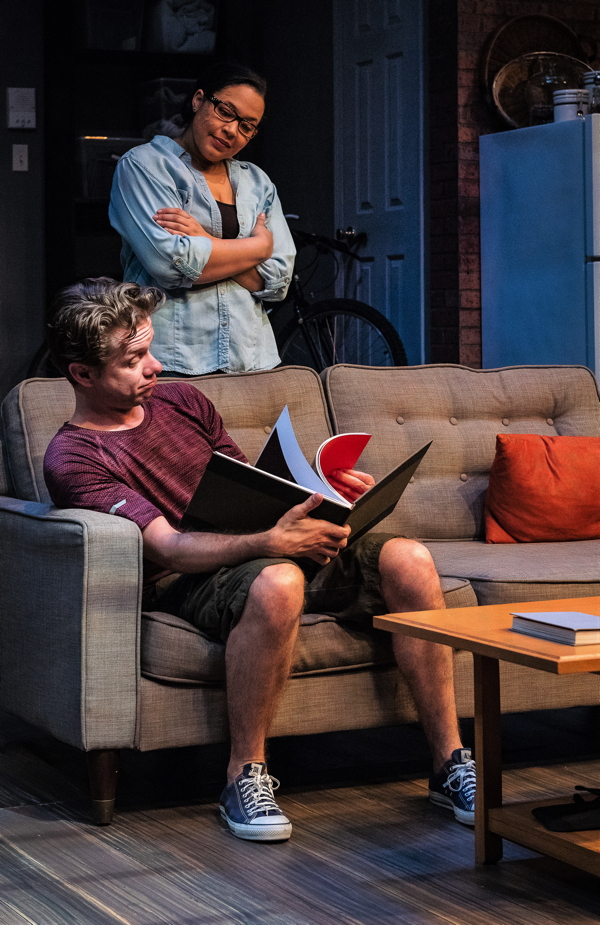 The premise of Donald Margulies’ “Time Stands Still” appears to be a straightforward retelling of two journalists’ experiences covering war and global crises. But the truth for each character is immeasurably more nuanced and complex. With believable, connected performances under the direction of Doug Finlayson, the New Jewish Theatre’s production bristles from the tension of unresolved feelings and professional realities. These conflicts collide in often messy but authentic and captivating ways, creating a satisfying story with plenty to consider after the curtain.

Sarah Goodwin and James Dodd understand the constant trauma and danger of armed conflict because they’ve been reporting from the frontlines for years. But two recent events, an IED explosion right next to James and a roadside bombing that killed Sarah’s fixer (her guide and translator) and left her injured, find them both at home in New York, with time to reflect on their experiences.

A visit by one of their favorite publishers and his much younger fiancée leads to an intense conversation about the nature and purpose of journalism, particularly a journalist’s responsibilities, and the couple’s future. Is it time for the two to get married, look for work locally and settle down? The questions are complicated, with answers that vary by individual, making “Time Stands Still” a gripping and compelling play with no easy resolution.

Wendy Renee Greenwood and Ben Nordstrom capture Sarah and James in exceptional performances filled with complex, conflicting emotion as well as personal and professional uncertainty. Greenwood’s Sarah completely owns her space and is a vibrant, stubborn force. Eager to get back to the work she craves, she’s clearly out of her element when cooped up in her apartment and even less certain about marriage, though she wants James to be happy.

Greenwood is always in motion. Though her character’s injuries make movement difficult, we see pain quickly followed by resolve pass clearly across her face, she doesn’t slow down. Her character seems genuinely and uncomfortably trapped by her current, forced hiatus and Greenwood expertly telegraphs Sarah’s frustration and waning patience in ways that are natural and relatable.

Nordstrom is solicitous and nurturing as James, and also more than a bit over anxious, expressing both concern and regret by walking the fine line between caring and controlling. While Sarah wants to get back to the war zone as soon as she’s allowed, he’s working through his experience by writing a book on horror films and feeling more and more comfortable examining violence from a safe, scholarly distance. He feels guilty for not being with Sarah when she was injured, but the longer he’s away from the battlefield the less interested he is in returning.

The rift between Sarah and James is much deeper and more devastating than either want to address at the play’s open, but each revelation and opportunity pushes their problems closer to the foreground. The resulting tension challenges who they are and what they do, as individuals and a couple, and no amount of love or mutual respect can alter that truth.

Jerry Vogel and Eileen Engel provide sympathetic, convincing support as the couple’s editor and his fiancée. Vogel subtly pushes to get Sarah working again, even as he worries about her going back to an unstable, war torn country. He also tries to avoid James’ questions about a story he submitted that won’t be published. The conflict reveals, in no uncertain terms, that Sarah’s work is in more demand than James', a point that likely factors into his reluctance to return to the field as well as his self esteem.

Engel’s character is initially insecure around the journalists, but curious about their work. She provides context and questions about the nature of being a journalist, instead of perhaps putting the camera or notepad aside and helping those in crisis. The questions aren’t easy to answer even when one acknowledges the value of documenting and reporting on war and it’s devastation. It is also gratifying to watch Engel’s character as she grows from naive and uncertain into a woman determined to speak her mind for herself.

John Stark’s stage design, essentially a small apartment, creates an environment that’s both homey and stifling. Columns and differing levels add physical barriers that at times impede Sarah and James, subtly mirroring their internal turmoil. The place feels smaller and smaller as Sarah gets more and more dissatisfied, as if she is trapped by everything in New York, including her relationship with James. Lighting by Michael Sullivan, sound by Zoe Sullivan, and costumes by Michele Siler enhance the overall mood and tone of the show.

As journalists accustomed to witnessing the horrors of war, Sarah and James simply don’t see, or prefer not to examine, the less obvious warning signs in their relationship. This is contemporary theater with a psychological bent that reflects the sometimes fragmented ways we view the world. Once we stop compartmentalizing our life, we are left to face the possibility that there’s nothing there to hold on to, no matter how much we love and respect someone.

The smartly structured play is a fascinating look at a relationship in flux that also explores contemporary journalism and the way war, its graphic violence and unending tragedy, effects those sent to cover it. Emotionally provocative and resonant with fully realized performances and strong, focused direction, “Time Stands Still,” continuing at the New Jewish Theatre through April 14, is theater that entertains and makes you think.