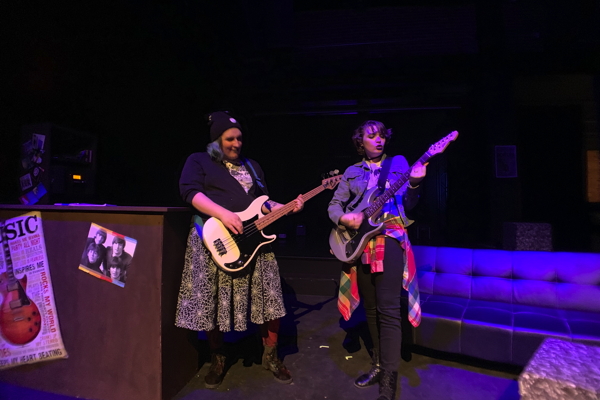 At Tesseract Theatre, 'Earworm' gets stuck in your head

"Earworm," by Shaulee Cook, is a play that gets stuck in your head. It is narrated by an anthropomorphized song and follows four separate plots that seem disparate at the beginning, but link in a way that feels inevitable at the end. This play is a crowd-pleaser for sure, especially for anybody who's life has been changed by music.

The end of the play on opening night managed to feel like a concert where everyone knew the words and was singing along to a punk anthem, which is no small feat for a new play about a fictional song. Given that the play was narrated by a character called The Song, and that all the plots centered on The Song, one might reasonably think The Song was the main character of the play. However, it was difficult to understand what The Song's goal was, and, for that matter, what the stakes were for The Song. Instead, the play was at its best when the audience could see music's effects on human characters whose goals and stakes were clearer. In those moments, the play was funny and moving as it tackled topics ranging from abuse to love. The characters were strikingly diverse in gender, sexuality, and race, and it was inspirational to see a trans kiss onstage portrayed as loving and normal.

The six-person cast does a great job switching from scenes based in realism to more abstract interactions with The Song. Shualee Cook plays the aging punk song with aplomb, linking the music's attributes to each scene's varied situations. Megan Wiegert and Julia Bennett each move skillfully between portraying teens playing music in a garage to rock stars, with Wiegert sizzling with the roller coaster emotion of the lead singer and Bennett's bass booming a solid confidence. And I particularly appreciated a trans character being played by a trans actor. Colleen Backer as Elise is something of the glue that links a number of the other characters together, and she does one of the most difficult tasks onstage: she performs listening extremely well.

The play by Shualee Cook is part of the inaugural Festival of New Plays at Tesseract Theatre. Cook describes herself as "writing theatre in the Midwest for so long that she's starting to forget how to speak Californian." And, indeed, one of the joys of "Earworm" were references to specific St. Louis institutions that filled out the world of the play. On opening night, in fact, certain lines got shouts from the audience as if it were a rock concert, and that was the general feel of the production.

The direction by Morgan Maul-Smith allowed the cast to build the play's crescendo. Maul-Smith also found several different ways to depict playing music live which kept the concert scenes from being static. It was unfortunate, though, that transitions between scenes were done in awkward blackouts and included more furniture moving than was necessary. Likewise, the set by Katie Palazzola included a bar at the edge of the stage that blocked sightlines and that Maul-Smith's direction did nothing to mitigate. A curtain upstage that opened to reveal a proscenium for a variety of concert moments, however, was successful, especially with the bright, colorful lights by Cheyenne Groom. Details throughout the set, such as sheet music, fliers for concerts with front women, and a fictional record cover image for The Song involving a candle and middle finger, helped create the world. Sound design in this play was crucial, and Ted Drury's selection of riot grrrl underscoring and the bass line of the play's fictional song worked beautifully to help create the world.

In all, "Earworm" is an exciting, important, and entertaining new piece of theatre about how a song can change lives.