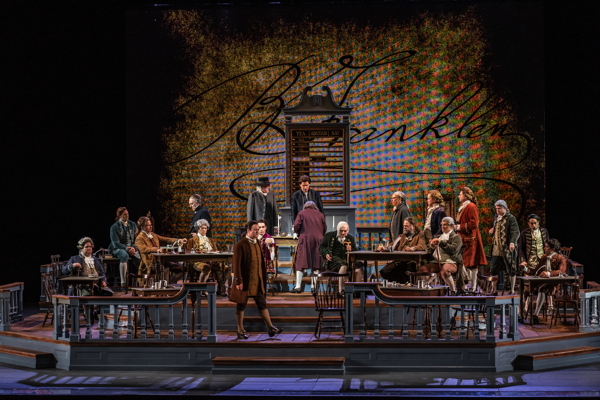 A solid '1776' celebrates American independence at The Muny

The 1969 American Revolution musical "1776," a splendid production of which is at the Muny through July 3rd, is not so much a traditional Broadway show as it is a play with musical interludes. Fortunately that play, by veteran screenwriter Peter Stone (his film credits include "Charade" and "Father Goose"), is a damn fine one.

Although it plays fast and loose with some historical facts, the book for "1776" is remarkably faithful to the personal and political conflicts that nearly sunk American independence. It is, for example, true that the Continental Congress demanded 86 changes in Jefferson's original Declaration of Independence--including, infamously, the deletion of an anti-slavery clause. But it's fictional that approval of the actual independence by the Congress was dependent on those changes.

Still, that fiction is based on the reality of the compromises that were necessary to achieve independence. When, towards the end of the play, Benjamin Franklin notes that "revolutions come into this world like bastard children...half improvised and half compromised" it provokes the laughter of recognition.

The score for "1776" is by songwriter Sherman Edwards, whose previous credits consisted mostly of pop tunes like "Wonderful, Wonderful" and "See You In September." There are only 15 songs--not a lot for a show that runs around three hours, including intermission--but they all illuminate character and advance the story line brilliantly. Indeed, they're so closely integrated into the show that they have never had a life outside of it, but that's hardly a knock on their quality.

In any case, a production of "1776" is going to stand or fall on the strength of its cast, and the Muny has assembled a darn near perfect one here. Robert Petkoff anchors it as John Adams, with a commanding voice and an appealing combination of passion and spiky combativeness in the opening number "Sit Down, John." He also captures the character's sentimental side in "Yours, Yours, Yours," the touching duet with his wife Abigail, winningly played by Jenny Powers.

Adam Heller is an appealing rogue as Benjamin Franklin and Keith Hines's Thomas Jefferson is a classic example of the iron fist in a deceptively genteel velvet glove. Ali Ewoldt shines in her cameo appearance as Martha Jefferson, describing her husband's musical courtship in the charming waltz "He Plays the Violin."

In fact, anyone seeing "1776" for the first time would probably be surprised to see how many of the best musical moments go to relatively minor characters. The most notable is likely "Molasses to Rum," in which North Carolina delegate Edward Rutledge mounts a cynical defense of slavery by pointing out the way New England maritime interests profited from it indirectly as part of the "triangular trade" https://en.wikipedia.org/wiki/Triangular_trade#Atlantic_triangular_slave_trade. Bobby Conte Thornton delivers it with a serpentine smirk and a powerful voice that makes the song as fascinating as it is morally appalling. Equally memorable is the moving "Momma Look Sharp" in which the Courier (Alex Prakken), Congressional Custodian Andrew McNair (Harry Bouvy), and the nameless Leather Apron (Benjamin Love) lament the deaths of young soldiers in the war.

There are many other fine performances here, including great work by local actors like Ben Nordstrom (Dr. Josiah Bartlett), Jerry Vogel (Rev. John Witherspoon), Larry Mabrey (Lewis Morris), and Joneal Joplin (Stephen Hopkin, never without his rum). There's not a weak link anywhere. Given that there are 27 named roles, that's pretty impressive.

Luke Cantarella's unit set has enough levels to create a variety of playing areas, especially when combined with John Lassiter's lights and the massive Muny turntable. Greg Emetaz's video projections add visual interest and even some fireworks for Adams's big final number "Is Anybody There?" There's not much choreography in "1776," but the steps Enrique Brown has given his cast or singing actors work well for them.

James Moore conducts a fine account of the score and Rob Ruggiero's expert direction pulls everything together into an immensely satisfying whole. Yes, it's a long show, but it's so compelling that you'll probably be astonished by how late it has gotten by the time the cast takes their curtain call at around 11:15.

That said, it can be hard to watch "1776" now. That's because it reminds us that we are a nation founded by well-read, educated men who could (and usually did) speak and write in coherent English sentences. At a time when the executive branch is dominated by puerile illiteracy, it's difficult to contemplate how far we have fallen.

Performances of "1776" continue through July 3rd on the Muny's outdoor stage in Forest Park. Come early to get a good parking spot, and then grab a drink and a snack and settle in to watch the preshow Americana-themed cabaret starring St. Louis's own Omega D. Jones and Berklea Going on the small stage east of the main entrance. You'll be glad you did.