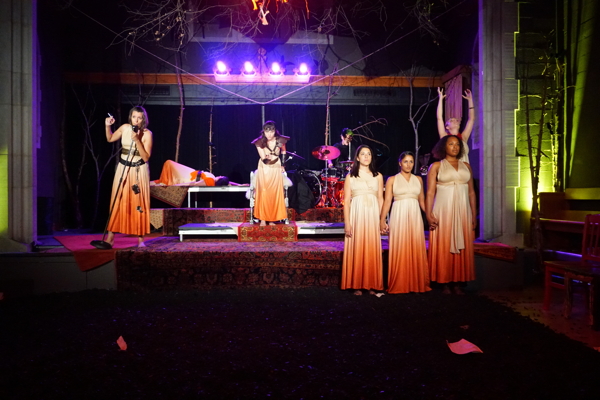 Justice is on trial in a modern adaptation of 'Antigone'

“Antigone: A Requiem Per Patriarchus,” now being co-produced by Equally Represented Arts (ERA) and the Slightly Askew Theatre Ensemble (SATE), is the culmination of an enormous two-year collaboration. Its brilliant mix of styles and elaborate interdisciplinarity succeed in juxtaposing timely politics with timeless questions about justice, family, and religion. The play elegantly moves from camp to a post-modern take on a classic with pitch-perfect pacing from director Lucy Cashion. Its concept is so dense with references, leaping from comedy to tragedy, that I hope to see the production again, which I mean as a high compliment.

The play went through six variations with the collaborative efforts of Prison Performing Arts (PPA), Saint Louis University (SLU), and now ERA and SATE. The text's authors are billed as Lucy Cashion and the ensembles at the Women's Eastern Reception, Diagnostic, and Correctional Center, Saint Louis University Theatre, SATE, and ERA. The program tells us that in addition to text from the previous five productions, the current production utilizes Sophocles, Mac Wellman, Bertolt Brecht, Anne Carson, Dorothy Parker, and the Congressional hearing with Supreme Court Justice Brett Kavanaugh.

The much-studied, oft-performed, and frequently adapted Ancient Greek text of “Antigone” by Sophocles set before the male citizens of Ancient Athens a dilemma: should Creon, king of Thebes, follow the laws of humans or the gods? Sophocles's answer, embodied by Creon's losses after he punishes Antigone, is that the gods' laws supersede any of ours. Thus, the first major contemporary change made to the Sophocles script in the ERA/SATE production is the centrality not of Creon, but Antigone. The second, and more noticeable, change to the Ancient text is that there are seven Antigones.

Entering the space, The Chapel, one was immediately engulfed in the world of the play. The church-shaped room was transformed by white branches in corners, a playing space of dirt in the center of three sections of seating, an overhead light transformed into a nest of sticks, bones, and broken eye-glasses, as well as several levels of playing space covered in Persian rugs on what would be the Chapel's alter. Central on the alter was a fur-covered throne, flanked by a drum-set, and several sets of ropes on which hung long pieces of cloth. This environment immediately set one in mind of a ritual, and was the excellent work of Cashion on scene design and Erik Kuhn on lighting design.

In this space, the seven diverse women playing Antigone roamed about in beige prison uniforms, shaking hands with delighted audience members and introducing themselves as Antigone. The audience was asked to write down answers to the question, “What is Antigone?” and the cast members took these pieces of paper to the center of the pile of dirt, on which lay seven large eggs. Despite the haunting décor of the space, the interaction with the audience was light-hearted, and the play began in a campy, humorous style. This first third of the play followed these seven Antigones as they tried to fulfill a deal with Hades and the Missouri Department of Corrections that said they had to perform the play every night unless they could find a way to end it without tragedy.

After the first third of the play, there was a beautiful shift in mood and staging to a script that mainly followed the story of Sophocles' “Antigone,” but with numerous additions. While many of the embellishments were textual, the most important was the brilliant direction of Cashion. In a style reminiscent of Anne Bogart, Cashion utilized choreography to simultaneously ritualized and defamiliarize the well-known story. Cashion elegantly kept the talented ensemble in the same style even as the style dramatically shifted. The addition of live percussion provided expertly by Marcy Ann Wigert; the shift from prison beige to post-modern Greek costumes by Liz Henning; and the change in lighting from a general wash to a moody darkness in Kuhn's lighting was expertly handled and showed a director at the height of her powers. Most impressive to me was the forceful, driving pace that Cashion obtained from the production.

The diverse, seven-person ensemble of Antigones worked well together, particularly in the transition to the second style of the production. That said, the ensemble did have a few struggles on opening night. Several actors dropped their lines or stumbled over words while trying to keep up with the pace of the production. Also, there were moments when the choreography was meant to by synchronized but some cast members were out of step. In a production that was about creating mood through precision, these small irregularities were noticeable, though I wonder if after a few performances they will be ironed out. Certainly they did not hinder me from appreciating this amazing show.

A few actors stood out to me. Ellie Schwetye as Cerberus, the messenger to Creon, added superb levity to the production with a standup comedy routine that had perfect timing. Laura Hulsey portrayed Creon's son, Haemon, with great sensitivity, threading the needle of that part's difficult dichotomy between respect for Creon as father/king and dedication to changing Creon's mind about Antigone's fate. Finally, Alicen Moser as Creon found superb nuance in a character that went from regal, to whiny white male privilege, to repentance and despair.

This wonderful production, the culmination of years of effort, is an exquisite new take on a classic. ERA, SATE, and everyone involved in the production's long germination should be congratulated for producing a superb, timely, and stylish new piece of theatre.