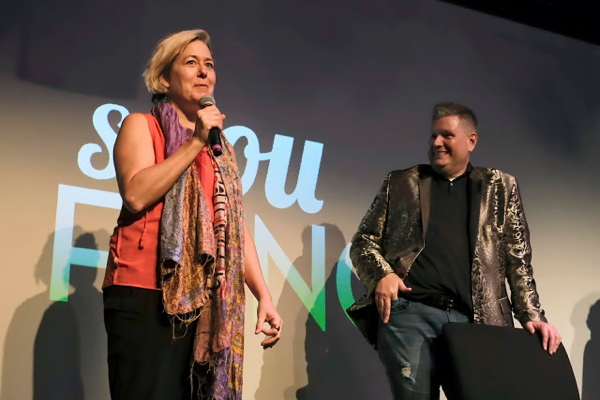 A celebration of life and multidisciplinary art at the 2019 St. Lou Fringe

Now in its 8th year, the 2019 St. Lou Fringe officially began at a kickoff performance hosted by Matthew Kerns, the festival's Executive Director. In the .ZACK performance space, Kerns invited Fringe artists onstage to pitch their various shows while providing background on the festival. The takeaway from the kickoff evening and the 2019 program was that St. Lou Fringe supports a wide variety of artistry. Its 25 shows included everything from brunch and burlesque on Sunday, to an evening of stand-up comedy, to family-friendly performances like the Tiny Totem Parade.

The informal, boisterous Kickoff had two main events beyond the introduction to the Festival: a celebration of the life of frequent-fringe performer Kevin Lamb who unfortunately passed away last year, and an excerpt from last year's Fringemeister performance, Intervals by J.M. Chambers, a play that centered on the difficulties of being homeless. With this focus on homelessness, 2019 Fringe spectators were encouraged to bring a non-perishable food item to any Fringe performance, and, at the end of the Festival, the staples were donated to a local food bank.

After entering the .ZACK space to watch “Secrets of the Bower House: Chapter One,” the ensemble, dressed in veils and carrying otherworldly props such as a light-strung birdcage, crossed through the audience and assembled on the stage for the “Liturgy of Initiation.” This first scene included call and response and lovely stage imagery. The rest of the show was a seamless flow of disparate acts, each done with great skill. There was a rap, “Poppin' Bubbles,” written and performed skillfully by Hearskra-z, as well as a mash-up of Shakespeare soliloquies by H. Blaize D'Angio that began with Juliet's balcony speech and was performed from above in the space's catwalk. At the end of the “Frankensteined” soliloquies, D'Angio removed her white nightdress, affixed a lightbulb in it, and a stagehand lowered the glowing dress like a ghost to the floor level of the theatre. There, D'Angio met it, having run outside the space and re-entered, panting humorously in juxtaposition to the lovely image. This mix of humor and haunting imagery was found throughout the performance. The final part of the performance, however, was melancholy and built to a tragic end. Erin Renée Roberts spoke the text the of the 1797 poem “Washing Day” by Ann Lætitia Barbauld over a long dance sequence. It was the perfect end to the performance, consisting of an ensemble of women dancing on the edge of the stage with a complex sequence of movements representing washing. The dance grew from synchronized monotony to a crescendo of passion and lives lived inside this repetition. In all, “Secrets of the Bower House: Chapter One” embodied the many disciplines found in the acts of the 2019 St. Lou Fringe.

The Festival ran from August 13-18, 2019. For a complete listing of shows, see the pdf on the Fringe website: www.stlouisfringe.com.