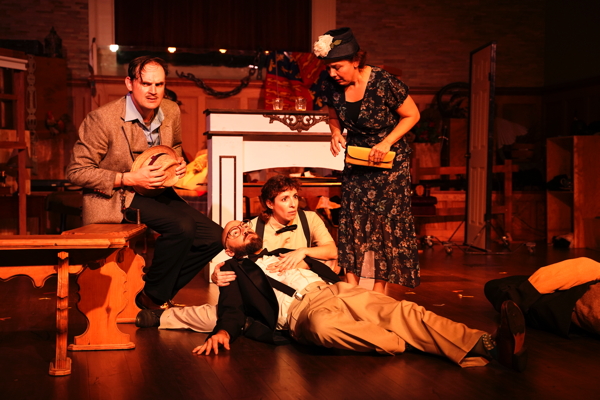 ‘The 39 Steps’ gives a traditional suspense story a comedic twist

St. Louis Shakespeare presents a lively version of “The 39 Steps” that delivers plenty of laughs. Patrick Barlow’s adaptation of an original story by John Buchan manages to poke fun at traditional murder mysteries while paying homage to its most illustrious director and producer, Alfred Hitchcock. A solid cast and smart direction serve the clever script well, keeping audiences of all ages engaged as the comically infused plot unfolds.

The fast moving show introduces audiences to Richard Hannay, a well to do gentleman in his 30s with time on his hands and a serious case of boredom. On a lark, he decides to attend the theater where he’s introduced to a performer with a prodigious memory and a mysterious blonde named Annabella Schmidt who’s hiding a few secrets of her own. A gunshot interrupts the performance, Schmidt jumps into Hannay’s arms and the story kicks into motion. She convinces Hannay to take her back to his apartment where she confesses that she fears for her life because she is trying to stop a plot against the British armed forces by some nefarious foreigners hell bent on starting a war. Then, just as suddenly and unexpectedly as she made her appearance, she’s gone.

Armed with mere snippets of information and a desire to clear himself of any suspicion, Hannay decides to follow Schmidt’s lead and try to foil the plot, resulting in a madcap adventure filled with humor and suspense. Along the way, Hannay meets a number of shady characters as well as the attractive but skeptical Pamela Edwards. Can he restore his good name and win the lovely lady’s heart before the bad guys do him in?

Though ostensibly a mystery, the script is clearly written with comedy in mind and director Dustin Massie and the four person cast mine the action and dialogue to maximum comic effect. Phil Leveling is thoroughly engaging as the dashing and courageous Hannay, and he uses his height and expressive face to his advantage. Kelly Schnider is appealing as Edwards and Schmidt, with an arched eyebrow punctuating her reactions. Rebecca Loughridge and Brian Kappler, credited as Clown 1 and Clown 2, fill in the plot while adding plenty of laughs as they skillfully juggle multiple characters and props with expectedly humorous results.

The company incorporates an exaggerated  dumbshow opening that’s quite effective at setting the tone while conjuring the spirit of vaudeville with a deft touch. A cluttered stage, resembling the backstage of an old theater, and flexible, period appropriate costumes, by designer Devin Lowe and costumer Kayla Lindsey, add just the right touch and enable easy transitions between the many scenes and locations. There are a few moments when the show seems to slow significantly, perhaps to catch its breath, and several instances where the actors’ varied accents get a bit garbled, but the humorous situations and ever-changing parade of characters never falters. Though an unexpected intermission seems unnecessary and disrupts the fun, the cheeky show is a rousing good time, even during its most implausible moments.

While imperfect, St. Louis Shakespeare’s production of “The 39 Steps,” continuing through September 7, thoroughly entertains. Fans of Hitchcock will be delighted by the many references to his work, and everyone can appreciate the physical comedy and wit of this clever and humorously twisted thriller.