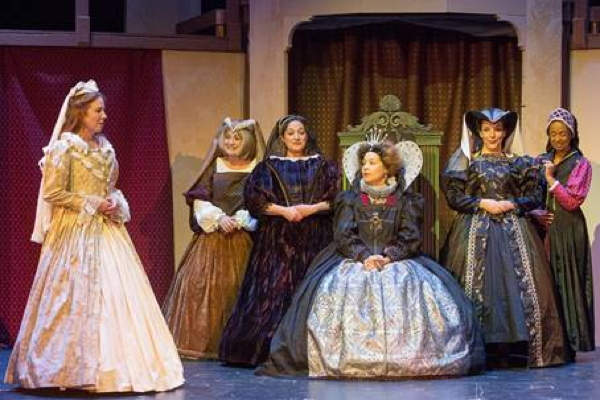 ‘Shakespeare in Love’ imagines the Bard’s life as a playful, flirtatious comedy

Insight Theatre Company closes its season with a lively production of “Shakespeare in Love,” an imaginative romp through the life of the young Will Shakespeare that uses humor and speculation to fill the many gaps in the playwright’s biography. The fanciful script, adapted by Lee Hall from the screenplay by Tom Stoppard and Marc Norman, is short on substance, but spirited performances and an abundance of slyly referential dialogue ensure the show is an enjoyable diversion.

At the curtain’s open, we see Shakespeare struggling with writer’s block - he’s trying to find the right words for a sonnet when he should be finishing his latest play. He’s already received an advance for the comedy about a young man named Romeo who falls head over heals for Ethel, the daughter of a pirate, but can’t bring the story elements together. Clearly this isn’t the lovestruck Romeo most of us remember from high school English or the many movie adaptations, but watching the Bard’s famous tragedy find form and shape is part of the charm of this romantic comedy. And, though it’s light on fact and history, the play is overstuffed with double entendres and familiar lines delivered by sometimes surprising characters.

Shakespeare, portrayed with a touch of melancholy and a randy disposition by an engaging Aaron Dodd, is soon visited by his friend, the well known and much respected Christopher Marlowe, played with natural charisma by Spencer Sickmann. Marlowe offers the poet a few choice phrases while encouraging him to get out of his room and find a love to inspire him. Soon enough, Shakespeare meets Viola, a young woman with a passion for the theater and a fiercely independent nature, personified with enthusiasm by Gwendolyn Wotawa.

Following a frequent Shakespearean trope, Viola disguises herself as a young man to audition for and win a part in the as yet unfinished script and, naturally, Shakespeare falls for her feminine persona during a visit to the court. Viola is also betrothed to the overbearing prig Lord Wessex, an appropriately bombastic Ted Drury, but that doesn’t dim her interest in Shakespeare, just as his marriage doesn’t prevent him from returning her affection. The lighthearted play is a romantic comedy after all and, with the players set and the die cast, the show rolls merrily through its exploits, revelations and conclusion.

In addition to Shakespeare, Marlowe and Wessex, several other historical figures make an appearance, adding a touch of realism to the fictional story. Wendy Renee Greenwood is fashionably imperial, with a hint of feminist leanings, as Queen Elizabeth and she’s attended by a priggishly pompous Robert Ashton as Tilney. Carl Overly, Jr. and Shane Signarino join in the fun as Burbage and Ned Alleyn, the leading players of the day, while Whit Reichert and Joneal Joplin have several scene-stealing moments as a theater owner and the company’s reluctant then thoroughly committed benefactor.

The ensemble is rounded out with humorous turns by Anthony Wininger, Kurt Knoeselseder, Tommy Nolan, Ryan Lawson-Maeske (as fetching a Juliet as there is), the impeccable Michelle Hand, Joseph Garner, John Foughty, Tyler Woods and Riley James. Finally, in addition to capably portraying supporting characters, Rachel Bailey, Mara Bollini, Chuck Brinkley, Ruth Ezell and Abraham Shaw add terrific musical texture and atmosphere onstage, with offstage accompaniment by Cara Langhauser and Catherine Edwards Kopff. I could quibble over the period suitability of Bailey’s guitar but, just like the clever and friendly dog in the early scenes, the addition is too pleasing to fuss over.

There really isn’t much substance to the comedy, so director Suki Peters and the capable cast keep the pace brisk, enhancing the show with physical comedy and musical interludes that help to disguise the flimsy script. Chuck Winning’s multilevel set design ensures the large cast never seems crowded while providing lots of visual interest, and period and status are capably established by Julian King’s costumes.

The genial comedy features far too much mugging to the audience, scenery chewing and telegraphing of familiar phrases for my tastes, but it works in this production. The exaggeration and artificially heightened performances remind audiences of the show’s fantastical premise in a way that fits the tone and timbre if the fluffy script surprisingly well. While the performances are not the best work  I’ve seen from the actors on stage, they elevate what could be a dull show that’s trying too hard into a thoroughly enjoyable diversion.

Theater fans looking for true insight or a Shakespearean classic are likely to be crestfallen, but the show gets a boost with strong performances by the leading characters and a top notch ensemble. For all its flaws and gossamer thin connection to history, “Shakespeare in Love,” continuing through September 15, manages to deliver a light and charming tale filled with invention. Fans of the movie and anyone looking for a satisfying and entertaining trifle will undoubtedly delight in Insight Theatre Company’s spirited and good natured production.