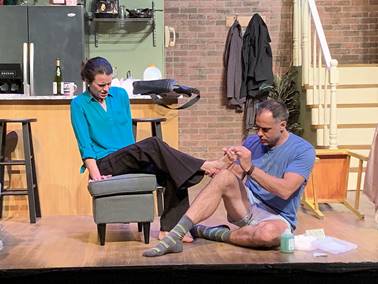 It’s been said that opposites attract, which may be true. But, as St. Louis Actors’ Studio demonstrates in their mesmerizing production of Michael Weller’s “Fifty Words,” opposites can also repel each other, often to a degree proportionate to their initial attraction. The characters in this intimate two-person play reveal, time and again, the personal ramifications of their instant and intense attraction in sometimes frightening and disturbingly authentic scenes. The show is at times unsettling in its portrayal of a modern marriage in crisis, but it is never uninteresting and driven by strong performances and direction.

The script is drenched in contemporary realism and conflicting ideas about love, relationships and control, and Adam and his wife Jan can’t seem to step out of the crosshairs. Played by Isaiah Di Lorenzo and Julie Layton, respectfully, the couple has been together a decade or more, but it’s plausible that they’ve never had a conversation that didn’t end with sparks of conflict. In years past, this has led to sex and placation but the dialogue suggests that energy is now directed at their son and professional pursuits. Early on, it is also suggested that Adam may be less than faithful to his marriage vows.

Tonight, the couple’s nine-year-old son is away on his first sleepover and Jan and Adam are alone together for the first time in, well, too long to remember. They’ve grown so accustomed to tolerating each other’s annoyances on the outside while they simmer and seethe on the inside – Layton is particularly adept at the latter, to chilling but satisfyingly powerful effect – that they don’t really talk as much as they share to do lists and bicker. But Adam is determined to avoid arguments tonight. An architect of feigned but once genuine confidence, he’s in the mood for relaxation and physical intimacy before he leaves for another business trip to the Midwest. Jan, a former ballerina and still a perfectionist, is pouring herself into her new business venture and determined, consciously or not, to keep Adam at arm’s length. She would prefer spending their night alone getting caught up with her work and, at least initially, barely tolerates his interruptions and obvious advances.

Adam knows how to push Jan’s buttons. Jan knows how to push Adam’s, as well as how to get Adam to push the buttons she wants. Their interaction creates a relentless tension as an emotional pendulum swings from one extreme to the other, leaving audiences wondering how each scene will resolve, and Layton and Di Lorenzo walk this tightrope with impressive dexterity. A moment of violence that’s brief, unexpected and disturbingly common and real sends their evening down a path that may just destroy their happy façade and grittier marriage. Or maybe it’s just the shake up they need to reignite their feelings. Guided by the deft hand of director John Pierson, Layton and Di Lorenzo expertly ride these ever changing waves. Pierson, who also designed the sound, uses the actors’ body awareness and emotional accessibility to show the passage of time in a way that’s hypnotizing and viscerally effective.

With its relentless and purposefully suspenseful barrage of conflicting feelings and raw, intense anger and disappointment, “Fifty Words” is not for everyone. Both characters are adept at manipulation and emotional blackmail, and neither is willing to give an inch. Layton’s Jan manufactures tears when it suits her purpose, making her stunned silence and blank stare all the more effective when she’s truly hurt. In a similar manner, Di Lorenzo’s Adam surprises both Jan and his self when he loses control of his carefully nurtured patience. The spaces between the action reveal the details the characters don’t want us, or each other, to see. Pierson keeps both the action and inaction from becoming stilted or forced, maneuvering the actors from revelation to revelation with an expert touch.

Sammy Campbell’s well-appointed set leaves little room between the characters, while creating just enough space for them to avoid each other. The design emphasizes the juxtaposition of intimacy and chasms between the couple, and the props, by Jenny Smith, tells us much about the characters while ensuring each has plenty of ammunition to fire, should the night escalate in that direction.

Despite all the resentment the couple has allowed to build between them, the show is sexy, achingly emotional and resonant. The two characters seem to have genuine affection and attraction for each other and the couple may have a relationship that’s worth fighting for, if they can find the energy to fight fair. The violence may be triggering for some, and the subject matter and sexual foreplay on stage make the show for mature teens and adults only, but “Fifty Words,” continuing through October 6, is theater from the real world that’s an entertaining, and unexpectedly cathartic, ride on a relationship rollercoaster of twisting emotions and truths.