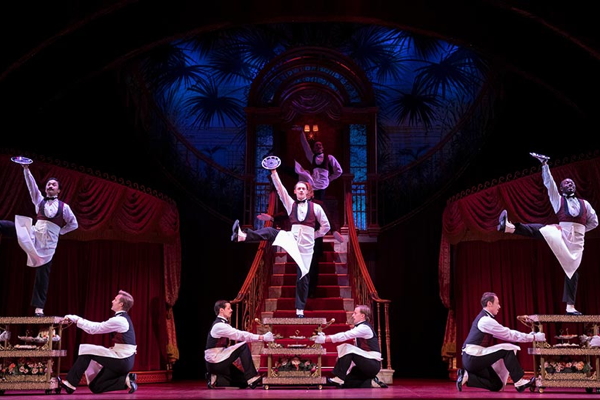 The fabulous Fox Theatre welcomes the Tony award winning revival of “Hello, Dolly” to its stage in a gloriously detailed and stylized show. The touring production honors the much loved story of the early 20th century matchmaker with a faithful interpretation and appealing cast. Filled with big Broadway moments and romantic match ups at every turn, the show celebrates the golden age of the American musical with a production that’s suitable for the whole family.

Opinionated and loquacious, Dolly Gallagher Levi, a widow of a certain age, is currently in the process of finalizing a match between the comfortably well-off Horace Vandergelder, a successful shop owner in Yonkers, and Mrs. Irene Molloy, who operates a small hat shop in New York. Much like Dolly, both lost their first spouse, and they are now ready to move on to a new relationship. But Dolly’s realization that she, too, is finally ready to marry again, and to Vandergelder, creates a new obstacle for the confident and resourceful matchmaker.

Determined to provide a happy ending for one and all, Dolly is also secretly working to help Vandergelder’s niece Ermengarde pair up with the aspiring artist Ambrose Kemper. Vandergelder’s employees, head clerk Cornelius Hackl and the young Barnaby Tucker, Molloy’s assistant Minnie Fay, the mysterious Ernestine Money and Rudolph, Stanley and the rest of the Harmonia Gardens staff join in on the fun in the fast-paced and satisfying musical.

Carolee Carmello is spot on delightful as the chatty, meddling Dolly. Her good natured and mischievious attitude brings a hint of magic to the show that Carmello expertly exploits. She gives the well-known “Before the Parade Passes By” and the titular “Hello, Dolly,” the big voiced, belted out renditions audiences crave, adding a knowing wink and an extra touch of humor to her performance for good measure. John Bolton is a taller, leaner Vendergelder than typically cast, with a pleasantly heady baritone, instead of a deep bass, that’s unexpected but welcome. The two create strong chemistry, with Bolton’s bumbling half-a-millionaire a less gruff, more likable characterization that feels more genuinely paired with the effusive matchmaker.

Analisa Leaming, as Irene Molloy, is possessed of a spectacular voice and expressive face, and Daniel Beeman compliments her to a “t” as Cornelius Hackl. The two share a believable attraction with an instant spark that brightens the tone of the show from the moment they meet. Chelsea Cree Groen as Minnie Fay, Sean Burns as Barnaby, Laura Sky Herman as Ermengarde and Colin LeMoine, as Ambrose Kemper, round out the romantic couplings in fine fashion, though I do wish director Jerry Zaks, or perhaps music director Ben Whiteley, would vary Ermengarde’s whiney howl a bit from scene to scene. Another notable and welcome aspect of the production is the presence of age appropriate actors in key and supporting roles, including Blake Hammond as Rudolph, the head waiter at Harmonia Gardens.

The dancing is always a highlight in the light-as-a-feather musical spectacle, and the current production, with choreography by Warren Carlyle, does not disappoint. “Dancing,” “Elegance” and “The Waiters’ Gallop” remain highlights, along with the titular number, with colorful costumes and a few new steps bringing fresh energy that honors the original. The updates add bright, cheerful accents to a show that is popular because of it’s familiarity and, based on the enthusiastic reception opening night, the combination works.

The up tempo musical sticks to the original script and score, by Michael Steward and Jerry Herman, ensuring the charming ‘Hello Dolly,’ continuing through October 13, delivers all the memorable songs and plot twists audiences expect. Fans of the American songbook and musical theater in general are sure to be pleased by the faithful rendition, and audiences of all ages can easily get absorbed in the whimsical tale.