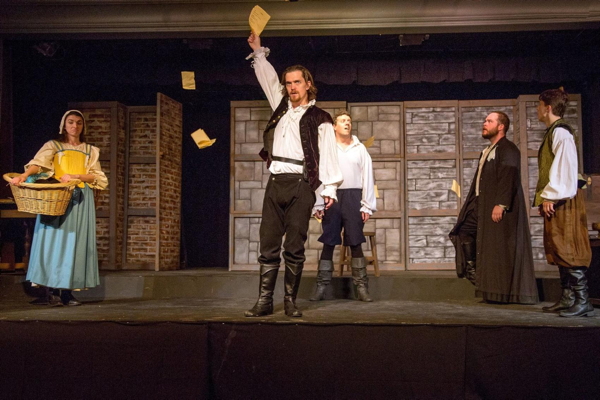 West End Players Guild opens their 109th season with a thoroughly compelling and quick paced interpretation of Bill Cain's clever ‘Equivocation.’ The script, which mixes actual history with an inventive look at Shakespeare’s daily life, is enhanced by engaging performances, strong direction and a set design that makes the most of the company's small and intimate theater space.

While working on "King Lear," Shakespeare is approached by Robert Cecil, Secretary of State in the service of the Scottish King James, to write a new play. The story he wants will celebrate the king, who recently ascended to the throne and survived the famous Gunpowder Plot, lead by Guy Fawkes and Thomas Percy. Cecil uses flattery, money and force of will to pressure Shakespeare into writing about the foiled plot using a written account ostensibly penned by the king himself.

Shakespeare resists, Cecil persists and soon enough, the bard is doing his best to bring the story to life. But it isn't working. Without an actual explosion or details from the conspirators, there just isn't the necessary dramatic tension to create a satisfying drama. Even the Globe players see the problem. But Cecil, a manipulative man with a vengeful nature and dislike for Shakespeare, refuses to let the playwright and his company decline the opportunity.

According to the wonderfully and plausibly structured “Equivocation,” the play that emerges is “Macbeth,” universally recognized as a brilliant and well-constructed classic. But getting from the writer’s research and inherent dramatic turmoil — if the script fails the company could be shut down and the writer and actors imprisoned, or worse — to the enduring classic proves no easy feat for the poetically inclined Shakespeare.

Roger Erb captivates as Shakespeare, with a resonant voice that commands attention and a manner that shifts seamlessly through the bard's many emotions and reactions. He's countered by John Wolbers, who's in his element as the conniving servant to the king. The two spar with believable intensity as quickly evolving plot develops, and an unstated respect emerges that proves dramatically and emotionally satisfying in the hands of the skilled actors.

The rest of the cast is equally committed and compelling in the imaginative look at the creation of a masterpiece. Reginald Pierre brings his usual gravitas and sly sense of humor to a variety of roles, including a persecuted Jesuit priest who’s been successfully hiding from the king for decades and holds the key to Shakespeare’s understanding of the story. Michael Pierce shows an affinity for accents, as well as enthusiasm and emotion that suits his varying roles. Alicen Moser is sympathetic, with an acerbic tongue, as Shakespeare's devoted but oft abused daughter Judith, and Mark Conrad makes a strong debut as a number of characters. The only knock against the sterling production is that there are a few moments when it’s difficult to hear Moser and Conrad.

The story is enhanced by a clever stage design, by George Shea, with realistically detailed scenic painting by Marjorie Williamson, and gorgeous costumes by Tracey Newcomb-Margrave. Audience members who have studied the playwright are likely to be delighted by the way his words weave in and out of the dialogue. Some references are obvious and others cleverly masked, ensuring the audience stays involved from the first line to the final curtain.

Director Tom Kopp has assembled a strong cast that's well equipped to handle the language and challenges of a script that fluidly shifts from play to an imagined life to actual history, sometimes within a scene. Fans of Shakespeare will undoubtedly appreciate the smartly crafted script, but “Equivocation,” continuing through October 6, is a delightfully twisting and satisfying play that’s entertaining for theater goers of all ages and familiarity.