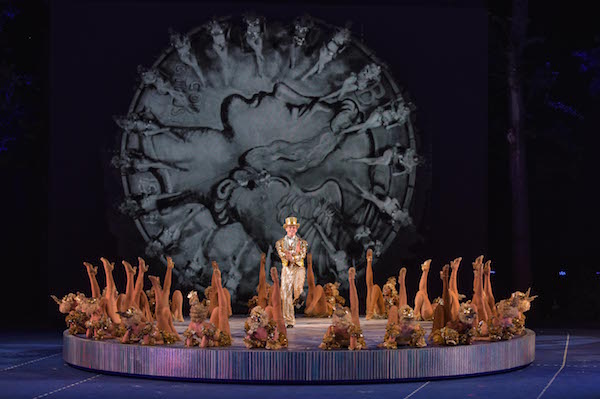 The MUNY pulls out all the stops with a gorgeous, glittering production of 42nd Street that never hits a wrong note or misses a beat. The show succeeds marvelously by surrounding spectacular tap routines and classic songs with the unlikely but engaging tale of Peggy Sawyer, a Pennsylvania country girl who starts out in the chorus, but ends up a star.

The production introduces audiences to the delightful voice, perky character, and fabulous footwork of Jonalyn Saxer, appropriately a newcomer to the MUNY stage, as Peggy Sawyer.  She's not simply sympathetic and attractive, she's feisty and energetic in a way that adds a hint of modern attitude to the Depression-era story. Saxer is surrounded by an excellent and talented supporting cast, resulting in interesting characters and a joyful excess of song and dance numbers that fill in where the flimsy storyline lacks.

Shuler Hensley is surprisingly personable as Julian Marsh, the demanding producer and director, and he's countered perfectly by the Jay Armstrong Johnson as the leading man and company lothario with a heart of gold. Emily Skinner commands attention and respect as Dorothy Brock, the star who reveals real tenderness beneath her diva antics. Skinner is complemented by Joey Sorge as her patient and ever-faithful suitor, and all-around nice guy, Pat Denning. The irrepressible Ann Harada and clever Jason Kravitz are perfectly comic as the sometimes cynical, but always upbeat, writing team of Maggie Jones and Bert Barry.

Among the ensemble, Bryan Thomas Hunt, Megan Sikora, Madison Johnson, and Fred Zimmerman are comically appealing in supporting roles. The entire ensemble shines in the song and dance numbers, including the adorable sextet of young MUNY dancers who pop up during an infectious rendition of "Keep Young and Beautiful."  Director Denis Jones also choreographed the show and the numbers are impressively complicated, with period-appropriate references to Busby Berkley and the Ziegfeld Follies. Hunt and dance captain Amy Van Norstrand lead with command, and the precision of the choreography is impressive and more than a little awe-inspiring when the entire ensemble comes together for the biggest numbers.

Attention to detail in all aspects of the show's technical design adds the finishing touches to this fabulously over-the-top production. Michael Schweikardt's scenic design utilizes the expansive stage to great effect, particularly with the large coin platforms, passenger train, and spectacular final staircase, while clever video and quick set transitions keep the story moving and compelling. The costumes and wigs, designed by Andrea Lauer and Leah J. Loukas, respectively, may have you longing for period style and are enhanced with solid lighting and sound design.

In 42nd Street, the story is second to the memorable songs and intricately choreographed tap routines. Frankly, I couldn't imagine this show getting any better treatment than in the current MUNY production. The music direction, by Ben Whiteley is crisp and well connected, ensuring the production keeps the audience's attention focused on the memorable show tunes and fantastic tap dancing. Favorite numbers are given a well-deserved spotlight, including the playful "We're in the Money," heartfelt "I Only Have Eyes for You," and beloved "Lullaby of Broadway," and the dancing is mesmerizing and perfectly synchronized from the opening tap of auditions to the opulent, sequin filled final "Bows."

There are also a number of surprising and deeply satisfying twists to this production. Skinner's Brock is filled with tenderness towards Sawyer and her true, lingering love for Pat Denning is intimate and kind. Saxer's Sawyer reveals more smarts and faith in herself than typical; she's confident but not needy. Finally, Hensley's Marsh wows the audience with his soft-spoken, deeply affective take on "Finale Act Two." These subtle and effective touches showcase each actor while revealing the resonance and clarity of Jones' directorial approach.

Though the storyline is fanciful and unrealistic, its personality rings true and filled with hope. Perhaps more importantly, the spirited exuberance of the ensemble is genuine and infectious, ensuring a good time for fans of big dance numbers and the golden age of Broadway musicals. Set in a time of financial and global insecurity, 42nd Street, running through June 30, 2016 at the MUNY in Forest Park, may nonetheless start you humming with a newfound positivity.