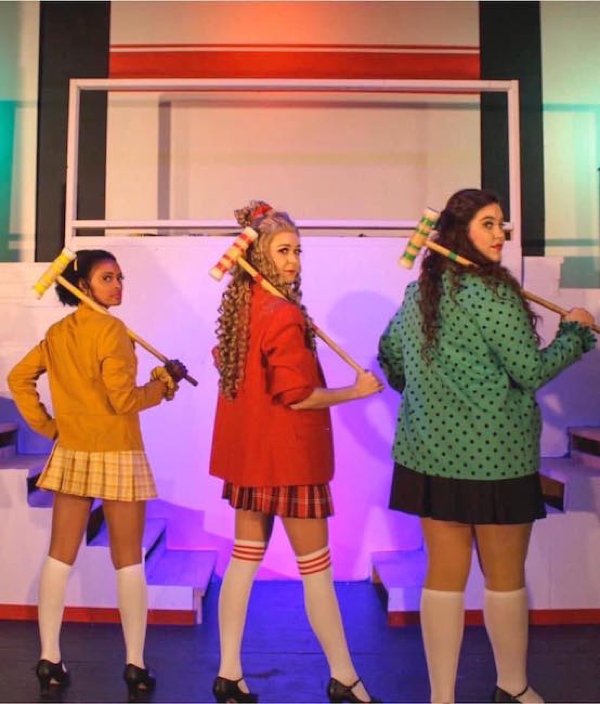 Myriad Productions, a new community theater company operating out of the Olive Tree in the Grove, launches with a thoroughly entertaining production of "Heathers." The musical adaptation of the 1980’s movie about high school, popularity and revenge benefits from sinister, yet relatable, comedy and catchy dance numbers, as well as an enthusiastic and engaging ensemble. Directed by Richard Matt-Zeitler, with musical direction by Holly Barber, the show tackles issues both serious and absurd with deadpan humor and a touch of naivete.

Veronica and her best friend Martha have always been on the sidelines watching as the popular kids, and in particular demanding divas Heather Chandler, Heather Duke and Heather McNamara, ruled the school. One day, Veronica and the Heathers are caught in the bathroom when they’re supposed to be in class. To avoid detention, Veronica produces a hall pass covering all four girls, and, after witnessing her skill at forgery, Veronica is welcomed into the clique via makeover and demands for more notes. Her popularity soars, and also makes Veronica uncomfortable, leading to her unlikely pairing with the cute, but potentially deadly, new transfer JD.

Myriad’s production of the musical comedy is big and bold and fun, and director Richard Matt-Zeitler keeps the context clear and the pace quick. Leads Abigail Alsmeyer and Dustin Petrillo anchor a talented young cast that impressively handles Caleb Long’s ambitious choreography and music director Holly Barber’s take on the layered harmonies and dissonance. Alsmeyer is conversational and witty, with a touch of burgeoning feminism that enables her to eventually take a stand. Petrillo’s sneering performance has just the right amount of sarcasm and murderous intent.

Julia Gilbert, Bria Jones and Savannah Fernelius are sharp-edged and fashionable as the shady, manipulative and sassy Heathers, sashaying through the show with a "judgey" air of entitlement. After a cast member injury, choreographer Long Stepped in and turns in a strong performance as Ram Sweeney, and he's well-matched and humorously sympathetic side-by-side with Benjamin Hunt's Kurt Kelly. Melody Valen Quinn is appealing as the "love and hugs" teacher Ms. Fleming, and the entire ensemble shines with well balanced harmonies and well executed choreography. Matt-Zeitler is encouraged to push the cast to develop character depth, Petrillo at times veers too close to impersonation and Quinn and several other characters are a bit one dimensional. These are areas to improve, not failures, and none of the notes significantly detracts from the overall outstanding and thoroughly entertaining production.

Despite a few opening night technical difficulties, the attitudes are pure teen angst and hormones, and the songs polished and well executed. “Beautiful,” “Fight for Me,” “The Me Inside of Me,” “Seventeen,” “Lifeboat” and “Kindergarten Boyfriend” resonate with clarity and empathy, while “Our Love is God,” and “Meant to Be Yours,” are filled with dissonance and intensity. But it’s Alsmeyer’s driving, plaintive take on”Dead Girl Walking” that really lingers.

Compelling performances from a young, enthusiastic cast and a darkly comic story ensure "Heathers," which ran through November 17, starts the company off in the right foot. If their next production, Sam Shepard’s ‘Buried Child,’ opening in January 2020, is anywhere near as entertaining as this show, the company will quickly establish itself among the top tier community theaters in the metro region.