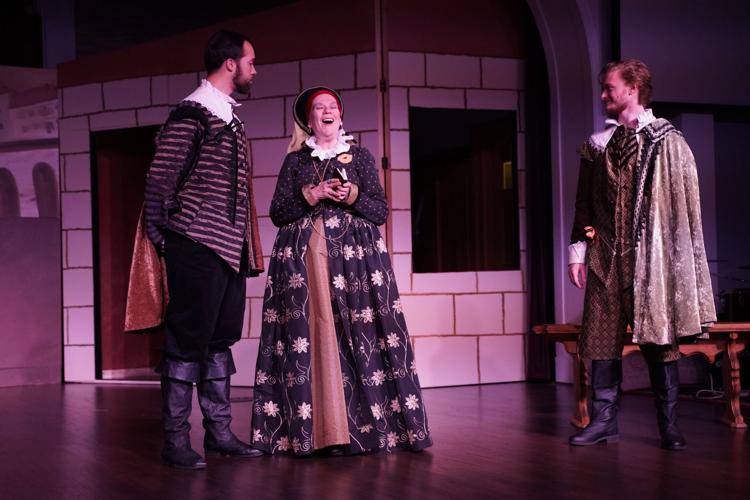 Shakespeare St. Louis gives 'The Merchant of Venice'  a compelling twist in and entertaining, if uneven, production

St. Louis Shakespeare presents William Shakespeare’s romantic comedy about lending, mercy and love that infuses powerful dialogue with long-held prejudices and classism. Though the performances and direction create a flawed and uneven show, the story comes through clearly and remains engaging throughout.

Young Bassanio is eagerly trying to win the hand of Portia, but he’s short on funds. His friend, the wealthy merchant Antonio, borrows the money from Shylock, the Jewish money lender, but their animosity leads Shylock to demand a “pound of [Antonio’s] flesh” as security. Bassanio wins Portia’s love, but Antonio’s ships go missing and Shylock’s daughter runs away with one of the men’s friends, so Shylock insists on holding Antonio to his pledge. The play is one of the Bard’s romantic comedy’s and naturally, everything works out in the end and there’s plenty of mirth and a couple marriages to tie the story in a bow.

The most interesting aspect of St. Louis Shakespeare’s production is casting Julie George-Carlson as Shylock, the money lender and a role generally performed by a man. George-Carlson handles the role well, and the character interpretation choices she and the director make are believably affective, though more variation would add much to the performance. Riley Capp and Jeremy Goldmeier bring energy to their roles, though at times they seem out-of-sync with the tone and pacing of the show. Capp capitalizes on this in his performance and, though Goldmeier occasionally stumbles, the quicker, more pointed delivery shakes up the sometimes monotonous iambic pentameter and presentational style.

Unfortunately, director Phil Gill fails to find a balance of character development, storytelling and motivated interpretation. Michele Friedman Siler's costumes are gorgeous and move well and the set, by  Kyra Bishop Sanford, cleverly folds and quickly adjusts, ensuring snappy transitions; unfortunately the same attention to detail was not paid to the set painting. Overall, however, ‘The Merchant of Venice’ is a satisfying and enjoyably faithful interpretation of the Bard’s play The production ran through November 9 at Tower Grove Baptist Church in the Shaw neighborhood.