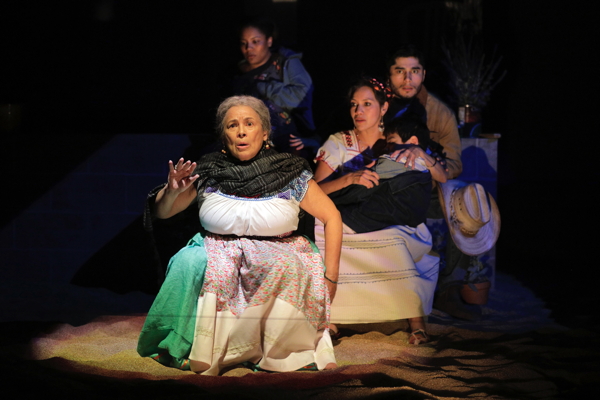 The Rep's 'Mojada' Showcases Its Acting

There are many exciting aspects of “Mojada: A Medea in Los Angeles” currently being produced at The Rep. The diversity of the cast, the nearly all-Latina artistic team, and the important theme of immigration central to the script fills the production with potential. That said, it is primarily the acting that fulfills that promise.

The script by Luis Alfaro--an adaptation of Euripides's “Medea” set in modern L.A. with Jason and Medea as undocumented immigrants from Mexico--has been produced to acclaim across the U.S., so I am in the minority finding it disappointing. For me, the adaptation was neither faithful to the source text nor original enough to truly get across the tragedy of contemporary immigration from Mexico to the U.S.A. Instead, its connection to Euripides's play merely felt awkward. The dramaturgy notes state that Alfaro began this script while working with Dreamers--students who were brought to the U.S. as children without immigration papers--and that the violence his character Medea suffers during the border crossing was based on one of those interviews. Medea's border crossing was, for me, one of the most powerful moments in the play. It was also one of the least connected to the Ancient Greek “Medea,” and an example of the power the script might have had if Alfaro had discarded the scaffolding of Euripedes to tell the contemporary stories which he heard during his interviews.

The script begins with a ritual during which Medea and two other characters use leaves to connect to the spirits of their homeland, but are interrupted by one of L.A.'s helicopters. Under the direction of Rebecca Martinez, the ritual never felt magical, so the helicopter did not feel like a juxtaposition and the introduction did not set up the possibility for real magic in this production's world, which is necessary later. Likewise, though the script builds to a huge climax, the pacing of the production did not crescendo alongside the text's tension. However, Martinez was successful in creating with her design team a convincing Los Angeles-style backyard for the action to take place in, and in eliciting solid performances from her cast.

The scenic design by Mariana Sanchez and lighting design by María-Cristine Fusté created a sun-bleached, earth tone backyard filled with actual sand and turquoise and pink accents. The small, plexiglass walls to keep the sand onstage were, for me, distancing, which was unfortunate in a play that has direct address and hopes to draw the audience in. The large, rectangular back of Medea's house hung over the stage like a brick until the play's climax. Unfortunately, the set's big reveal was marred by poor masking that made it impossible for the actor involved in the production's apex to get into the house without being seen. Fusté's lighting was effective throughout, but particularly during the direct-address, storytelling moments of the script. For me, the costumes of Carolyn Mazuca were the most effective design element, seeming at once realistic, archetypal, and character-revealing.

Of the actors, the one that stuck out the most to me was Guadalís del Carmen as Josefina, a woman who sells pan dulce from a cart and knows all the neighborhood gossip. Carmen inhabits completely her character's stymied ambition, painful separation from her husband, and, ultimately, her painful decision to follow her dreams. Alma Martinez as Tita easily transitioned from the world of the play to that of speaking directly to the audience, serving as a one-person chorus. Sometimes her direct address filled in backstory or provided caustic commentary, and occasionally she simply an arched eyebrow towards the spectators in order to speak volumes. Maggie Bofill played the wealthy Armida with a lovely subdued cruelty, which was an effective foil to the soft-spoken approach Cheryl Umaña took to Medea. The moments when these women were onstage and interacting were the most effective moments in the show, and demonstrated Martinez's skill as a director of actors.

I applaud The Rep's decision to bring Alfaro's script to St. Louis with its largely Latina cast and artistic team. I look forward to more productions at The Rep with similar diversity and inclusion. Performances of Mojada: A Medea in Los Angeles” continue through February 2nd at the Repertory Theatre of St. Louis in Webster Groves.