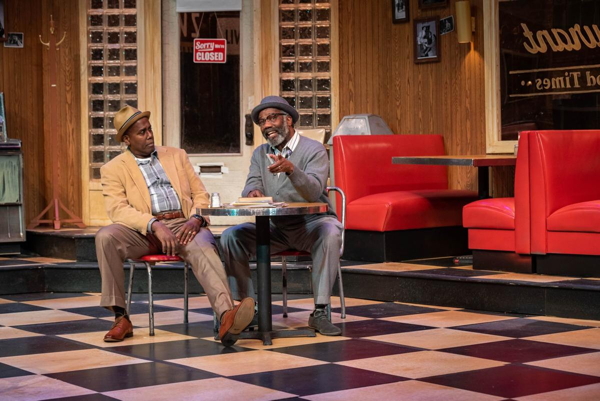 "Two Trains Running," now being produced by the St. Louis Black Repertory Theatre, is an exquisite production of a superb script by one America's most important playwrights: August Wilson.

The play focuses on Memphis, the owner of a Pittsburgh diner in 1969, and the regular customers of his establishment. Over the course of three hours, the audience sees deeply into every character and the U.S. politics they represent. This is due, in equal parts, to Wilson's stellar writing and the outstanding production. The play's themes of gentrification, incarceration, lack of opportunity, and injustice at the hands of white people are, unfortunately, as timely now as ever, making the evening that much more powerful.

This production is a homecoming for James A. Williams who does a star turn as Memphis. Williams returns to St. Louis after originating a different Wilson role on Broadway in 2007. And, while Williams may portray the central character in the show, demonstrating a wide range of emotions of a frustrated man whose once bustling café is now mainly empty, there is no weak link in the seven-person cast. The waitress Risa, played by Sharisa Whatley, powerfully portrays a smart woman chaffing at her role, often through expertly enacted gestures and facial expressions as she actively listens to other characters' monologues. Holloway, the wise older man in the diner, is played with delicious humor by Ron Himes. Carl Overly, Jr., plays the number runner, Wolf, as simultaneously streetwise and sensitive. The desperate young man, Sterling, is played by Jason J. Little in a way that invokes great empathy, even when the character seems on the road to ruin. Hambone, a man driven to mental illness due to injustice, is given great depth by Travis Banks. Finally, J. Samuel Davis plays West, the fastidious, successful undertaker somewhat out of place among these other characters, just on the edge of camp, which is a perfect juxtaposition to provide the world even more depth.

Director Ed Smith keeps the long, naturalist script perfectly ebbing and flowing from humor to tragedy; from sotto voce intimacy to crescendos full of the threat of violence. And, in assembling this cast and creating the varied rhythms, Smith shows off Wilson's words while making the naturalism shine.

The set is a stunning piece of work by Margery and Peter Spack, every piece of a late-1960s diner standing in relief under understated lights by Jim Burwinkel. Through the diner's windows a street is visible, and in one beautiful moment Burwinkel creates a twilight outside while the interior is still full of artificial light. The set itself has too many details to note here: period furniture, of course, but also period photographs on the walls, walls topped with tin above thin wood, and art deco lights hanging above. The type of environment now that would be retro-hip, but, at in 1969, was showing its age. The costumes by Daryl Harris showed the range of fashion in 1969, from the older characters wearing hats and ties that pointed back towards the 1950s and the younger characters wearing open shirts with gold chains and turtle-necks indicating the coming 1970s. Altogether, the design absolutely drew me into the world.

Between the cast, direction, and design, The Black Rep has given August Wilson's classic text a beautiful platform. Performances continue through January 26th at the Edison Theatre on the Washington University campus.