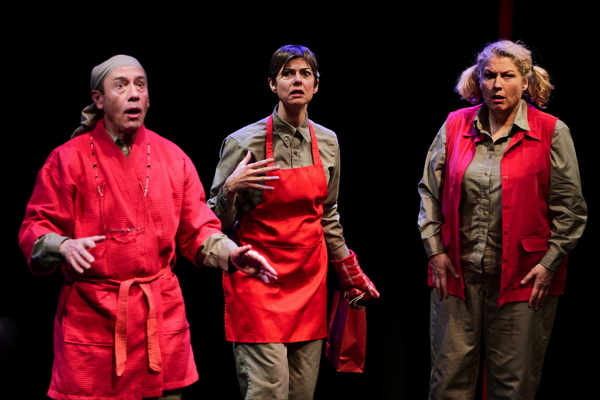 The play fits Upstream's mission to bring world theatre to St. Louis perfectly since the script embodies the sinister camp, episodic style found in the work of many Canadian writers, such as Ronnie Burckett, Tomson Highway, and Judith Thomson.

The play is told in three parts, and at first it's a mystery how they connect. An element of the fun is the slow reveal of the scene's relationships, so I won't spoil that here. Suffice it to say, the enigma pays off.

The first part of “Wildfire” focuses on three triplets who are all struggling to find connection with each other and the outside world; the sisters are hilariously embodied by Jane Paradise, Nancy Bell, and Tom Wethington. The second part finds two entirely new characters, each a self-proclaimed “loser,” meeting and straining to form a romantic relationship. Tom Wethington plays a computer nerd with a hilarious hunched posture that juxtaposes neatly with the straight-backed lonely cat-lady embodied by Jane Paradise. Finally, the play ends with a monologue from yet another new character whose lack of libido is transitioning into a fever of desire, throwing her world into chaos. Nancy Bell handles this monologue with aplomb, beginning her description of her descent into libidinal chaos by casually throwing a table and two chairs offstage. That gesture-both simple and surprising-sets up the play's final emotional tone to a "T".

The minimalist design is perfect for the script since it keeps the action moving rapidly forward. The set by Michael Heil is a red outline of a cube sitting on a small, black riser with red accents. The few set pieces include plastic chairs on wheels, a similar plastic table, and a black, wooden cradle. The props by Jenny Smith include a birdcage and a doll that are used to great effect. The red phone handsets in act one may be the best way I've ever seen phone calls handled onstage, particularly because there was no phone ringing sound effect. The costumes by Laura Hanson are unified throughout the three parts by color and material. This maintains the minimalist aesthetic and, ultimately, helps the storytelling. The lighting by Steve Carmichael is dim and flowing, in harmony with the world. The projections by Traci Lavois Theibaud were cartoonish and perhaps a little literal for the rest of the play's abstraction. The moving font of the letters spelling out the titles of the parts was difficult to read, causing some distraction.

That said, director Philip Boehm keeps the 75-minute production perfectly on track, with each part's pacing driving to its conclusion and short projection break before the next scene. Boehm also keeps the production walking the line between camp and revulsion.

In all, “Wildfire” at Upstream Theatre is a clever, intriguing evening full of laughs, and, as the connections between parts are understood, chills.