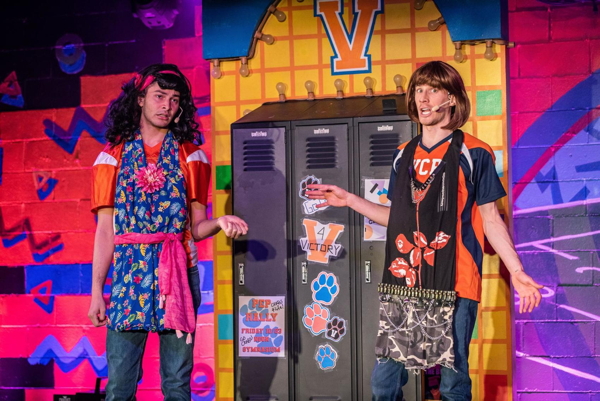 "Dress the Part," an "ad-rap-tation," of Shakespeare's "The Two Gentlemen of Verona," is hilarious, celebratory, and strangely accurate rendering of the original play.

It's exciting that the Shakespeare Festival St. Louis (SFSL) not only concentrates on classic Elizabethan plays, but focuses on Shakespeare's mission writ large. That is, like Shakespeare, SFSL adapts classic plays to fit the times; creates productions for diverse audiences; and focuses on new work.

This SFSL production of the Q Brothers' "Dress the Part" accomplishes all three components of this mission. The Q Brothers--GQ and JQ--are best known for "Bomb-itty of Errors," but they have continued their work adapting Shakespeare's plays into exuberant, hip-hop-inspired new works. "Dress the Part" takes a scaled down version of the plot of "The Two Gentlemen of Verona" and sets it in the world of high school cliques. The words and music for "Dress the Part" are witty, playing on tropes that are equal parts Shakespeare and U.S. high school comedies. There is also a great deal of making fun of both of those scenes, with lots of winking at the audience. So, while the play is set in the world of high school and its concerns, there's no need for spectators to have high school nostalgia to enjoy this play. In fact, the words and music include a great skepticism for high school "glory days" reminiscence.

"Dress the Part" is performed in the no-frills club The Ready Room on a small stage in an area opposite the full bar. The whole space is part of the act, including signs in the restroom trying to recruit a water boy for the football team. The music, performed by the DJ Crim Dolla Cray, is stylish, fun, and makes the evening feel more like a night at a club than in a theatre. However, the skill of the two actors, Jordan Moore and Garrett Young, each of whom play more than half a dozen characters, demonstrates this is an evening of theatre at its highest level. It is impossible to overstate the energy of Moore and Young as they sing, dance, and change costumes to "Dress the Part" over the course of a rip-roaring 80 minutes. Their joy and humor onstage are infectious, and their skill giving each of the characters individuality is truly spectacular.

The static scene design by Margery and Peter Spack is exactly what is needed to keep all the costume pieces on hand and allow for the quick transitions. Likewise, the Spacks provide an incredible attention to detail in the painting of the upstage wall; fliers on the set's lockers; and the dressing of the bar outside the stage. The costumes by Christina Leinecke are masterpieces of minimalism. Each costume is a piece or two that must be added or subtracted quickly, but each one is individualized, detailed, and perfect for the character. My personal favorite was the costume for angsty-artist Julia, which was an apron-like dress with an old Depeche Mode shirt, bullet casing belt, and plaid skirt. The lights by Jesse Klug were equally impressive, moving, as they did, from club-style concert lighting, to more traditional theatre scene lights. Likewise, Rusty Wandall as sound designer impressively helped create the world, and Thomas White, the audio engineer, kept the microphoned actors and the DJ's music exquisitely balanced so no words were ever lost.

The Q Brothers also directed this production, alongside the choreographer Sheena Laird, and any laugh possible, they got. Whether that was due to the lightning-quick pacing or the often satirical dance moves, the entire production was extremely successful. A particularly effective moment was the music video-style cheerleader entrance of one of the characters cutting to, shall we say, a more realistic version. And whoever came up with the football effect at the end is a genius.

If Shakespeare walked into The Ready Room and saw rhymed dialogue, cross-dressing actors, a comedy full of anachronism, a full bar, and loud music accompanying a play that took a lot of inspiration from one of his own, I think he'd get a drink and be one of the people laughing the loudest. If you bought him another drink after the show, I bet he'd even tell you all the sources he borrowed from to write his version. I suspect he'd approve of the whole endeavor.

Performances continue through February 15th at The Ready Room in the Grove. For more information, visit the Shakespeare Festival web site.