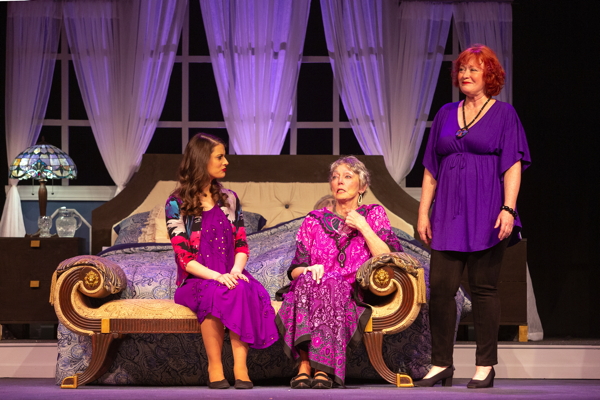 One of Edward Albee's three Pulitzer Prize winning plays, "Three Tall Women" utilizes theatrical surprises, winningly executed by Stray Dog Theatre, to plumb the depths of what it means to be alive.

Though more honored by award committees, "Three Tall Women" is less known than Albee's "Who's Afraid of Virginia Woolf," primarily because of the latter's film version. This well-directed production of "Three Tall Women" is a marvelous opportunity to introduce the play to any unfamiliar St. Louis audiences. For spectators already acquainted with the script, the production's quality makes it a worthwhile occasion to refamiliarize one's self.

The script, not surprisingly, focuses on three women: an elderly person, her caretaker, and a lawyer sent to straighten out the elderly woman's finances. The interactions between the three lay bare the life of the eldest. Then, in a coup de theatre, there is far more onstage than it originally seems. The writing is surprising, daring, and full of the wit you would expect from an Albee play, and Stray Dog's production is up to the challenge.

The scene design is a unit set by Miles Bledsoe, and it is a wonder of realism. A large bed with a wooden headboard sits upstage center, dominating the space, while two wooden arm chairs with dark leather and gold accents sit on either side of the stage. Flanking the bed are tiffany lamps on end tables, and the walls have art-deco-style glass lamps. The symmetry of the set reflects the symmetry of the script and works wonderfully. The lights by Tyler Duenow are cool blues before the show and during intermission, enhanced by soft piano music, that fade into warm interior lighting during the scenes. The subtlety of the lighting is exactly what is needed to keep our attention on the words and actors. The costume design by Gary F. Bell -- who also directs -- are appropriate for the characters, but have subtle flaws. For instance, the dress of the youngest actor fits loosely in Act I; the shoes of the caretaker are not very practical; and the purples in Act II meant to indicate unity are slightly different hues. These are all small things, but since the set and lights create such a unified world, these minor costume shortcomings stand out.

That said, the directing of Bell is superb. In a play full of monologues, he provides the actors enough business to keep busy when others are talking, but our focus is never pulled from the speaker. The pictures he paints with the three female actors are generally triangles, helping to emphasize what's important in the current moment. And when the blocking is not a triangle, it underscores the moment. For instance, near the end of Act I, when the two younger characters are on a backless daybed bench, staring in anticipation at the elder character, Bell creates a breathless tension onstage and in the audience. Bell's utilizes humor, intellectualism, and pathos in equal turns to keep the audience engrossed by Albee's complex dialogue.

Of the actors playing the three women, Donna M. Parrone as the 52-year-old character stands out. Parrone manages to let the wit of Albee's words shine, while slipping effortlessly into a heartfelt rage of pain when the one male character shows up. Jan Meyer, as the eldest character, has the widest range to travel between acts, and she handles this well. Meyer's cynicism in the second act manages a delicate balance with a contented resignation.

This effective revival of one of Albee's most celebrated works plays through February 22 at Stray Dog Theatre.