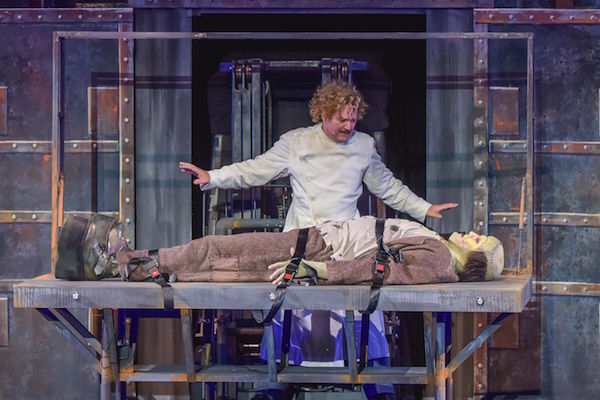 Fans of musical comedy and Mel Brooks will be delighted with the MUNY's fast-talking, wisecracking, innuendo-throwing, high-stepping, laugh-out-loud funny production of Young Frankenstein. The show retains all of the fun, horror movie spoofs, and clever references of the movie on which it's based while dropping only a few of the film's favorite jokes.

Victor Frankenstein has died, bringing much relief to the local villagers. That is, until they learn that the doctor has a living grandson, Frederick, teaching medical science in America. A telegram is sent post haste and soon the brilliant doctor is saying goodbye to his coy fiancée and boarding a ship to Transylvania, his family's homeland. Though he pronounces his last name Frahnk-en-schteen and swears an aversion to his grandfather's calling, he finds himself tinkering around in the laboratory, trying to re-animate a creature of his own. The villagers are scared and plan to investigate, but end up frightening the monster away, where he finds temporary refuge with a hermit that just wants some company. All accompanied by a barrage of puns, physical comedy, and bawdy humor.

The villagers want to destroy the monster; the doctor feels compassion for his creature and a growing attraction to his assistant, Inga. She is curious and willing, Igor is delighted to see him working, and Frau Blucher is melancholy and suspicious. Naturally, his fiancée chooses this moment to show up. Comic confusion ensues, the monster sings, dances, and falls in love, and everything eventually falls into place with a happy ending assured for all.

Robert Petkoff brings a friendly, frenetic energy to the role of Frederick Frankenstein. He's light on his feet with a smooth easy voice and gregarious nature. His inflections and phrasing remind one of Gene Wilder in the best ways, and is pushed to near perfection in act two. Steve Rosen, as Igor, is full of fantastic double takes and sly humor, and it's a joy to watch him and Petkoff interact. Their reactions to each other are well timed, and they play off each other's character in moments both subtle and overt. The chemistry between the two men can be felt clear to the back of the amphitheater.

Jennifer Cody, as Elizabeth; Stephanie Gibson as Inga; and Vicki Lewis, as Frau Blucher; add to the fun with strong singing voices and exaggeratedly comic gestures. The three women use their voices expertly, and Cody and Lewis are particularly inspired with cartoonish interpretations that reflect the tone and spirit of the original roles, while Gibson gives the naïve sex kitten a sharp wit and knowing air.

John Scherer, Zachary Daniel Jones, and dance captain Brandon Timmons provide strong support, and Timothy Hughes is a delightfully fleet footed, dim witted, and randy Monster. Hughes is remarkably quick and agile for a man wearing six-inch (or higher) platforms shoes, and the difference in his and Cody's height is irresistible comedy that's mined to great effect throughout their scenes.

Mel Brooks may be the grandfather of "bad dad" jokes, with his love of corny puns and sly interjections of topical humor. He's never one to miss a pratfall or the opportunity for a lewd joke delivered with a leering glance. Director Marcia Milgrom Dodge recognizes and embraces his style by updating some of the pop culture quips and keeping the sexual humor without showing too much skin or lingering too long. The balance works well for a family friendly show, though parents of preteens and younger children will want to consider the movie, which provides the source material.

The music and choreography are campy and fun, and there's always a point of visual interest or an unexpected joke to catch your attention. The songs feature numerous stylistic references from the history of American music that keep the tone of the show light and breezy. Music Director Charlie Alterman and the orchestra do a spectacular job of paying attention to the details in the musical styles while keeping the transitions fluid, interesting, and engaging.

You hear Broadway show tunes in "The Brain," the sounds of country in the twang influenced "Roll in the Hay," and pop and teenage angst in "He Was My Boyfriend." Brooks has penned a plethora of clever ditties, with layered, suggestive lyrics and catchy tunes, but it's the spectacular dance number, Irving Berlin's "Puttin' on the Ritz," that best captures the spirit and humor of the show. The song builds from a faltering duet between Frankenstein and the Monster to an enthusiastic jazz and tap routine that features the entire ensemble, plus a cadre of younger MUNY dancers. Josh Rhodes choreography starts slow and simple then adds layers of complexity, increasing tempo, and an onslaught of dancers, creating a number that's both visually and rhythmically mesmerizing.

The MUNY's production of Young Frankenstein, running through July 19, 2016, pulls out all the stops with intentionally madcap scenes, smart, well-crafted songs, and sharp dancing that perfectly complements the over-the-top horror movie spoof. Though some of the humor may be a bit risqué for younger children, the show is a good-natured romp through Mel Brooks fertile imagination that is sure to leave you laughing and humming.