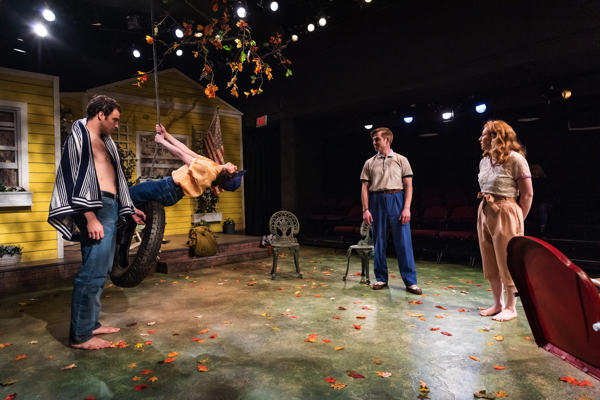 The Webster Conservatory is the source of such fine theater. It’s perhaps your best bang for the buck in town. They have just opened a most satisfying production of William Inge’s “Picnic.” This play first appeared in 1953. It was Inge’s second big hit on Broadway, following his “Come Back Little Sheba.” “Picnic” won the Pullitzer Prize for drama.

Like most Inge plays “Picnic” is set in a small mid-western town. In this case the town is specifically Independence, Kansas, Inge’s (and my) home town. And more than any other Inge play “Picnic” is based on the playwright’s own family and neighbors.

We see an open yard between two unpretentious clapboard houses. It’s Labor Day week-end. Autumn leaves are strewn about the yard. In one house live Helen Potts, a widow, with her unseen but demanding invalid mother. In the other live Flo Owens, also a widow, with her two daughters—Madge, eighteen, and Millie, sixteen. Madge is the most beautiful girl in town, while Millie is not so pretty—but she’s the best student in her class. Three unmarried female teachers board with the Owenses.

Madge works at the dime-store, but her boy-friend is Alan, son of one of the rich country-club families. All of Mrs. Owens’s hopes for her daughter rest on the girl’s thus “marrying up”.

Into this world of females comes a startling flash of masculinity. Mrs. Potts has hired Hal, a handsome young drifter, to do odd jobs. The women take notice. Hal is a kid from the wrong side of the tracks who made it to college (and into Alan’s fraternity) only because he’s a football star. But he just didn’t fit, so he dropped out.

Doug Finlayson directs this lovely production, and it’s another gem added to his long record of beautiful work. It’s done with such respect for the script—and for the time which is portrayed.

The romantic leads are perfectly cast: Molly Burris is superb as Madge. Such honesty! Such a believable, heart-wrenching lack of sophistication. We see her sense the power—and yet the evanescence—of her own beauty. Chaunery Tanguay plays Hal, and makes him a good-hearted, playful but troubled young man. The sheer magnetism that draws these two beautiful young people together is palpable. And, of course when they dance we have to have that “Theme from ‘Picnic’” swelling in the background. Well, it works.

Lynda Cortez gives a lively and slightly bratty Millie. The sibling dynamic between the kid who envies her sister’s beauty and the beauty who envies her kid sister’s brains plays out most naturally.

Alan, Madge’s rich boy-friend, is a rather bland part. Jack Theiling does lovely work, capturing Alan’s innocent acceptance of his privileged status. (Would you believe that in the Broadway premiere young Paul Newman was cast as Alan rather than as the sexy “bad-boy” Hal?)

This is a play about loneliness and about the ever threatening loss of youth and its opportunities. The most poignant illustration of this theme is embodied in Rosemary, one of the school-teacher boarders. Her long-time boy-friend is Howard, a shopkeeper in Cherryvale eleven miles away. After a date in which Rosemary was “awful nice” to Howard, her terror at growing into an old maid crumples her into abject begging: “You gotta marry me, Howard. PLEASE marry me, Howard!” Amanda de Pinto, as Rosemary, makes this scene utterly convincing and heart-breaking. Cameron O’Neil makes Howard the perfect foil for her—a nice guy, not unkind, but stunned by Rosemary’s desperation.

Other strong support is given by Natalie Foy as Mrs. Owens, Audrey Keen as Mrs. Potts, Emily Perkins and Arrianna Chai as two of the teacher boarders, and Pierce Abplanalp as Bommer a newspaper boy.

The quite perfect set is by Eddie Teshara. Costumes are by Sarah Lockwood, lighting by Joshua Burgmann and sound by Savannah Jade Gipson.

I especially want to congratulate director Finlayson and all of his young actresses on their portrayals of ordinary women from three generations ago. These 21st century young women are famously and variously “liberated”. Yet without a trace of condescension and with real empathy they embrace these Kansas women who lived lives so differently constrained.