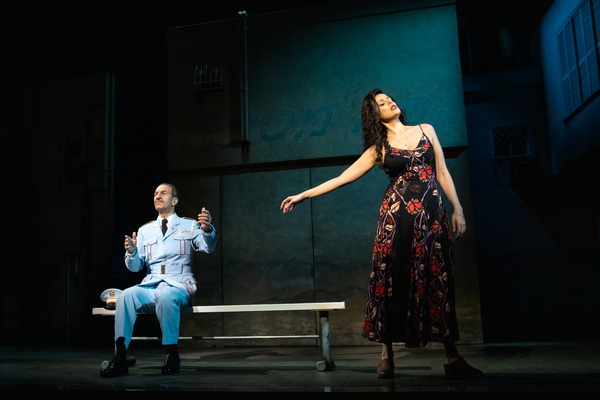 'The Band's Visit' is a gentle, humane show with gorgeous music

"A band of angels visits the house of hope.
It will catch your heart--and not release it."

"The Band's Visit" has arrived at the Fox. You will not forget it. It's the gentlest, most humane musical I ever saw. And the music is utterly gorgeous.

We meet a group of Egyptian musicians, the Alexandria Police Ceremonial Orchestra, on their way to help dedicate an Arab cultural center in Israel. Not fluent in Hebrew they use English as their travelling language. They are expected at the city of Petah Tikva but, because Arabic speakers often conflate "P" with "B" when speaking English, the bus tickets they purchase deliver them to Bet Hatikva--a tiny "development town" in the Negev desert. It is truly the middle of nowhere.

And there's no bus out until tomorrow.

The band, crisp and erect in sky-blue uniforms, are simply lost. They look like innocent angels who have been set down in a strange world. But the locals, led by the vivacious, café owner Dina, offer the visitors dinner and a place to sleep.

The plot is very modest. Friends are made, losses are mourned, domestic stresses are explored and resolved, love is stumbled after--and beautiful music pervades and facilitates all this.

Next morning the band leaves.

The show is blessed with two brilliant performers in the leading roles. Janet Dacal, as Dina, fills the hall with the humor and heartache that all those songs offer. Sasson Gabay plays the band's director, Tewfiq--a role he played in the original wonderful movie. He's a miracle of economy and understatement. Such meaning in a mere look, a silence, a small graceful gesture! (Is he leading the band or is he a fly-fisherman playing the line?)

Joe Joseph plays Haled, the handsome young thorn in Tewfiq's side. He lacks respect for discipline; he takes off his military cap, unbuttons his jacket, wanders off to chat with every pretty girl he sees. (His one pick-up line: "Do you like Chet Baker?".)

How do we face disappointment? Simon, the band's clarinetist (James Rana), in idle moments, plays a few lovely bars from an overture he has for years left unfinished. ("Well, my wife got pregnant, and then . . . well, you know.") Itzik (Pomme Koch) and his wife were blissful when first wed, but now she screams and weeps. Well, his long unemployment, the crying baby . . . things happen. But he's a loving, gentle father.

There are moments of dreadful awkwardness, as when three musicians sit stiff and silent at table while their hosts (from a suspicious other culture) air their domestic squabbles.

But music surrounds all these pains and sadness and it's a consolation. The members of the band are real virtuoso musicians and they're always at the edges of the scene, like benign watchful spirits. They play clarinet, flute, cello, violin, oud (Arabic lute), darbouka (goblet drum). It's deeply middle-eastern, with drifts into jazz and Broadway. There's a whiff of klezmer.

Music crosses barriers of enmity. In World War II Allied and Axis forces alike listened faithfully at 9:55 each night for Nazi Radio Belgrade's broadcast of Lale Andersen singing "Lili Marlene". As a young Jewish girl Dina not only fell in love with Omar Sharif, but was a devout radio fan of Umm Kulthum, the greatest ever Arabic singer. In the magic evening she spends with Tewfiq Dina sings a soft romantic ballad about these two icons.

Much of the poignancy of the evening lies in people struggling to make contact, to express their hidden feelings in the absence of a shared fluent language. I was reminded of the searingly romantic scene in Brian Friel's Translations in which an Irish girl and an English soldier, desperately in love, can only exchange Irish place names.

There is much humor--and it's often touching. Papi, a local teen-ager (played by Sasson Gabay's real son, Adam), is too nervous to approach any girl. He simply can't speak to them. He says about women, "If she's over twelve and has breasts and is not my mother . . I just hear the ocean!" He receives expert kindly advice from Haled, the band's Lothario.

There are surreal touches like that Telephone Guy who's been waiting for weeks every evening by the town's one payphone for a call from his girl friend far away. Yes, it finally rings.

In the end Dina's open generous heart, which has led her down a very bumpy road of love, warms and opens Tewfiq's heart--which has been tightly sealed with grief and guilt. She is quite smitten with this deeply decent gentleman. She's a lonely woman and she rather blatantly offers him this night of love. But Tewfiq, in an achingly simple and beautiful moment, gracefully declines. He's caught her heart, but he releases it into the waters of casual love--and to the eager Haled.

The flexible set, by Scott Pask, in tones of desert and concrete, easily morphs from terminal to café to apartment to roller rink. Many shows use a turn-table just because they have one; here there is charming self-mockery in having someone sing "Sometimes I feel like I'm going in circles" while the turntable rotates.

It's a lovely, hopeful evening. After all "Bet Hatikva" means "House of Hope".

Do not leave until after the curtain call and the amazing brief concert that follows it!

The Band's Visit continues at the Fox through March 8th.