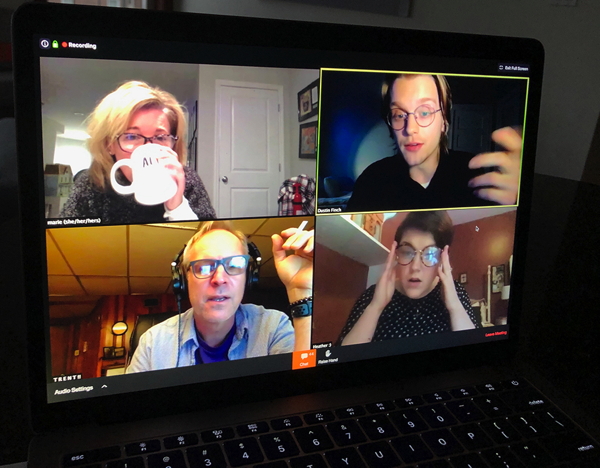 Who's zoomin' who?: 'MUTE: A Play for Zoom' is an innovative mix of creepiness and comedy

Nearly every aspect of the economy has taken a hit from the COVID-19 pandemic. And while some sectors are listening to politicians rather than medical professionals and preparing to resume business as (almost) usual, performing arts organizations are obliged to take a more cautious approach. Theatres, concert halls, music clubs, and other indoor environments where large groups of people gather are high-risk areas for airborne virus transmission, leaving local theatre companies in suspended animation until this fall at the earliest.

As a way of staying in touch with their audiences, a number of local companies have turned to the Internet. The Repertory Theatre of St. Louis made a video of its local premiere of the topical comedy "Cake," which was forced to close after only a few performances, available to ticket holders. ERA Theatre is presenting a video version of its 2015 St. Lou Fringe hit "Moscow!" as a free ticketed event through May 30. And on April 5th, local playwright Nancy Bell and director Lucy Cashion (the creator of "Moscow!") presented the world premiere of "MUTE: A Play for Zoom" as part of a Facebook live "watch party."

I missed that premiere, but happily a video of "MUTE" is available both on Facebook and at Vimeo. I watched it last night and while this half-hour one-act is not without its issues, it makes ingenious use of the popular videoconferencing platform. Watching it on my laptop with headphones, I was quickly drawn in to the darkly comic world of the play.

A smart mix of hilarity and horror, "MUTE" manages to be both comic and creepy simultaneously. "In a world much like ours," says playwright Bell, "there exists a video conference call. And in this call, there are academics, confusion, fire, and...one hamster." One rather remarkable hamster, I might add.

The play's setting is a Zoom teleconference in which a group of academics are waiting for The Dean to join them from the Frankfurt campus so they can begin the official agenda. They're hampered by the fact that most of them have been unable to download the agenda and by the fact that The Dean appears to be related to Beckett's Godot. The academics in question are a motley crew. Marie (Michelle Hand) is desperate to get out of her house and back to her office on the locked-down campus because "the event" has infected her son (Liv Hand) in ways that are, to say the least, disturbing. Her older colleague Trent (Michael James Reed) views "the event" through a radical leftist lens while sucking on an obviously unlit cigarette. Heather (Delaney Piggins) urgently needs to see her grandmother and Fiona (Keating MX) finds her attention divided between the conference call and her unseen husband, whose dementia seems to be turning violent.

Staffer Justin (Jakob Hulten), the only one not clearly on the edge of mental or physical collapse, is bemused and then unnerved by the increasingly sinister tone of the meeting--a tone made even more so by the barely-seen presence of Lila and her hamster Man Ray (Sophia Brown).

In her description of the play, Bell cheerfully acknowledges her debt to Ionesco, Beckett, and Chekhov. And I did, in fact, see references to "Rhinocerous," "Waiting for Godot," and "The Three Sisters," respectively. But I also found its mix of the delirious and disturbing reminiscent of some of the Firesign Theater's more dystopian audio plays, especially "In the Next World, You're On Your Own" from 1975. And the way it relies on what is hinted at rather than what is shown for a sense of horror harkens back to the work of H.P. Lovecraft. The final product, though, is uniquely hers.

Everything tends to fall apart a bit at the end, at least for me. But even so "MUTE" is a compelling and original theatre piece that gets great performances from the entire cast. Michelle Hand's hilariously unglued and clueless Marie (effectively the leading role) is yet another bright feather in her theatrical cap, but the fact is that everyone involved does fine work.

It's hard to know what shape the local theatre scene will take over the next year or so, but "MUTE: A Play for Zoom" certainly suggests some interesting possibilities.