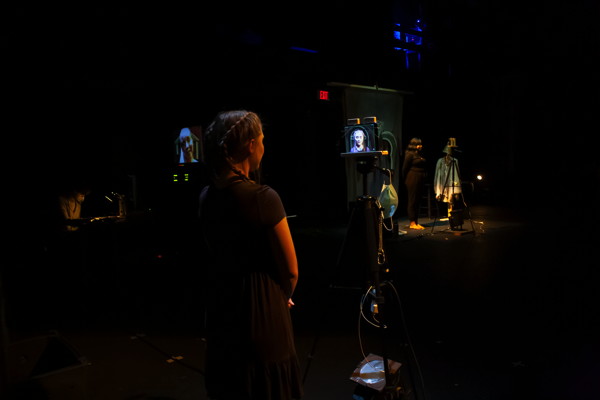 “The Tragical Tribulations of Little Red Riding Hood in the Land of the Wolf-King: A True Story” began its life as a devised production in rehearsal at Southern Illinois University, Edwardsville (SIUE) in January 2020. The plan was for it to be produced in spring, and for two months, the five-person SIUE student ensemble cast worked with SIUE faculty director Chuck Harper and SIUE student assistant director Jillian Phillips to dance, write, and devise a pastiche of Little Red Riding Hood stories. Then a global pandemic happened. About 160 days later than planned, the show went on, but broadcast live from a socially distanced black box theatre on the SIUE campus while adhering to Illinois’s strict COVID-19 regulations. The play streamed live on YouTube September 30 - October 4, 2020, and hopefully in the future will be available as a recorded video on SIUE’s Theater and Dance YouTube page.

Running about 60 minutes, “The Tragical Tribulations of Little Red Riding Hood in the Land of the Wolf-King: A True Story” adroitly juxtaposed portrayals of Little Red Riding Hood -- primarily taking inspiration from Alphonse Daudet’s 1872 play -- alongside devised scenes of standup comedy, storytelling, singing, and abstract movement. The play was translated with great skill from the stage to the streaming arena by SIUE Theater and Dance professor Jim Wulfsong (an ironically appropriate name!). Thanks to Wulfsong’s expertise, the play retained its ability to create composition, and throughout the streaming performance, visuals were utilized to great effect.

The outstanding all-woman cast -- Sadie Harvey, Montana Hughey-Takacs, Maika Miller, Clara Parker, and Margaret Sommerhof -- worked wonderfully as an ensemble, moving effortlessly from style to style, from scene to scene, and providing uniquely portrayed Little Red Riding Hoods, along with the characters Little Red meets along her picaresque journey to grandma’s house. Particularly effective for me were the moments when the young women played male characters offering a clear and frightening picture of toxic masculinity “wolves” in a variety of clothing: notably psychiatrists, Romeos, and writers.

The scenic design by Roger Speidel was made of unique backdrops behind each actor since they were filmed physically distanced, including clever woodwork that looked like bark of trees, windows like spider webs, and a variety of visuals such as columns that suggested a type of classical timelessness. The lighting by Michael Schneider was quite dramatic, moving from dark red hues for the dance interludes to more neutral, cool colors for most of the dialogue. The costume design, of course, featured red cloaks with hoods, but to that Laura Hanson added successful accents for each Little Red and cartoonish pieces for the characters Little Red meets in the forest. The sound design of this show took on even more importance than normal, however, given that it was a video piece. Sound designer Emma Davis provided important underscoring to scenes that magnificently combined the feel of theatre and film, while providing effects such as wind to create an audio world to fill in visuals outside the frames. Given the complicated nature of the filming and live-streaming during a pandemic, and how cleanly the performance came off, I can only imagine the work of the crew: Stage Manager Allison Baltz, Asst. Stage Manager Miranda Fair, the Stream Team Emma Davis and Emily McCardell, and the Production Assistant Emily Beach. Applause to all of them.

While this show would have had a different impact live, and there is a part of me that hopes I can still see a stage version someday, a benefit of this online performance is that anyone in the world could watch it. In my opinion, the show was an excellent example of the type of new work coming out of SIUE, and I hope it received an audience beyond our normal regional boundaries.