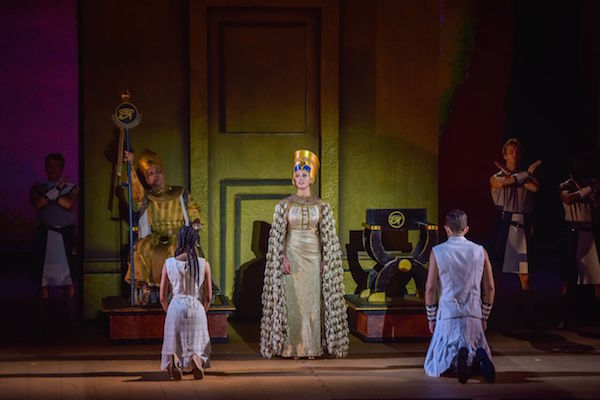 A long time ago, when the pharaohs ruled Egypt and their armies were exploring and annexing every nation they could conquer, a renowned captain unknowingly captures a Nubian princess. Surprised by her quick wit and strength, and beguiled by her beauty, he spares her life and the lives of the women and children captured with her. Soon they fall for each other, creating a love triangle with tragic consequences. The fictionalized romance is filled with lessons on love, betrayal, and leadership, delivered in a fantasy-like setting and filled with pop rock sensibilities.

The ill-fated love between Aida and Radames is brought to life in the MUNY's ephemeral production that is at times languid, but always filled with tension. Aida is set in ancient Egypt, but the dream-like opening and suggestive set clearly establish that this story is a fantasy.

Stars Michelle Williams, as Aida, and Zak Resnick, as Radames, are engaging as the ill-fated lovers. Resnick is confident and self-assured, though most appealing when he shows vulnerability. Williams is particularly effective when she reclaims her pride and purpose as daughter to the king of Nubia, a naturally powerful cameo by Ken Page. But it is Taylor Louderman who commands the stage, embracing her role as Amneris, the pharaoh's daughter and successor, as well as Radames betrothed.

Each character is individually sympathetic, and the chemistry between the three leads is convincing. It is easy to see that Radames loves both women, and the respect and mutual admiration between Aida and Amneris is as infectious as their laughter and as deep as their battle. The storytelling is fabulous, driven by the action and punctuated by the songs.

The ensemble capably handles the vision and the songs, by Elton John and Tim Rice, as well as courtly intrigue and the inevitable tragedy. Director Matt Lenz shows clear purpose and a good understanding of the story's emotional levels, though the pacing could be pushed. The musical is moving and the story engrossing, but there are moments when more intensity and a deeper emotional connection between the actors would really amp up the show's power.

After the provocatively moody opening number, Louderman's character turns perky and self-absorbed. As the events unfold and her own storybook romance falls apart, she gains wisdom and maturity. As importantly, the actress channels her emotions well, filling the large stage with expression and using her impressive range to good effect.  The romance between Aida and Resnick is heartfelt, though played a bit too intimately for the large stage at times. However, Williams is often radiant, and undeniably regal in her posture and movements. These qualities played well to the audience, particularly when supported with the vocal prowess Williams naturally possesses.

The songs are drenched with Elton John's lyrical styling and easy melodies, and the cast handles the challenges and opportunities well, though a few of the ballads would benefit from more passionate interpretations. Louderman opens the show finding heartbreaking nuances in "Every Story Is a Love Story," then Williams turns up the volume and energy with "Dance of the Robe," while Resnick, Patrick Cassidy, and Wonza Johnson stand out in several supporting numbers. Cassidy and Lara Teeter, as the ailing pharaoh, present an interesting subplot and Cassidy's villainous ambition is delightfully comic. But this is the lady's show, and William and Louderman play off each other fabulously, as admiring friends and as adversaries in love and war.

Music director Andrew Graham does a nice job with the arrangements, while Jon Rua's choreography is filled with Egyptian and African influenced numbers, which the ensemble capably handles under dance captain Brianna Mercado. The scenic and lighting design, by Tim Mackabee and Nathan W. Scheuer, successfully captures the dream-like atmosphere of an ancient land and is complemented by sound design from John Shivers and David Partridge. Personally, I found the costumes, by Robin L. McGee, to be a less successful element of the show. I understand this is a rock fantasy interpretation, but would have preferred to see the textures, colors, and style consistently reflect the land and era in which the story was set.

Aida, the closing show of the MUNY's 98th season, running through August 14, 2016, transports audiences back in time to the mysterious, glory days of the pharaohs, then tells a classic love story with a perspective we've seldom heard. The result is captivating, if not always inspiring, with the interplay between Williams, Resnick, and Louderman a multi-layered and intriguing highlight.