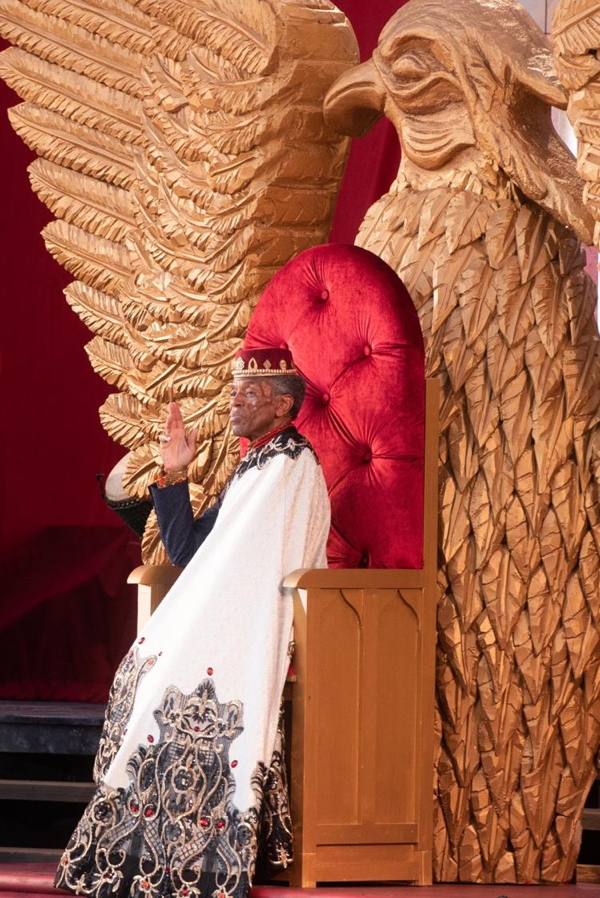 The St. Louis Shakespeare Festival returns to its home in Forest Park this summer with a riveting portrait of Shakespeare’s poignantly tragic, aging king and his daughters.  Directed by Carl Cofield the engrossing show stars a fiery André De Shields and an excellent supporting cast featuring a number of locally based actors.

The aging King Lear has decided he is ready to retire. To set his affairs straight, he proposes to divide his land equally between his three daughters -- Goneril, Regan and Cordelia. In front of a large assembly, he asks each to profess their love for him before awarding them their land. Goneril and Regan fawn over their father, each trying to one-up the other, and the king is pleased. Cordelia makes a more modest pledge, promising her father the love, devotion and loyalty due him. Even then pressed, she refuses to add extravagant protestations to her simple, honest pledge. The king is not pleased.

He banishes Cordelia and splits her land between her sisters, requesting they provide him with a retinue and allow him to spend half his time at each daughter’s castle. Secure in their newly bestowed lands, the two sisters conspire to limit their father. Soon, he is asked to give up his knights. In a fury he rushes from one daughter to the other, only to discover he is banished from his own castles. His rage turns to madness and any hope for a happy ending is abandoned. And that’s just the primary plot. There’s plenty of intrigue and maneuvering in the constantly shifting show, as Shakespeare was a fan of subterfuge and sibling extreme rivalries. Cofield uses African drumming and precisely timed entrances and exits to ensure continuous action propels the story forward.

De Shields performance is a thesis on the nuances of rage and madness. Clearly stunned by what he perceives as his youngest daughter’s betrayal, his rage makes him feel three times his size and full of virility. Racked with grief, betrayal and the all too slow realization of his folly, he finds facet after facet in the darker side of emotion. His collapse is palpable, and his cries and pleas heartbreaking.

Bold and determined, Rayme Cornell and Jacqueline Thompson are electrifying and combative as daughters Goneril and Regan. Their costumes indicating hawkish instincts and subversive intent. Their rivalry only briefly set aside to expedite their greed. Nicole King is their opposite as Cordelia. Calm, with a soft, measured voice her sincerity is as constant as her love. Quietly raising her own army with France, she is the only daughter who still welcomes the king.

The supporting cast is well balanced, and their efforts to equal the outstanding performance by De Shields pay off. Allen Gilmore is lithe and quick with verbal repartee as the Fool. He’s quite deft at incorporating references that connect Shakespeare’s language with contemporary meaning. Lelund Fowler is justifiably angry and relentlessly cunning as Edmund, while Daniel José Molina is guileless and trusting as Edgar. He proves a capable match to his brother, wit-to-wit and jowl-to-jowl. J. Samuel Davis ad Brian Anthony Wilson are well comported, and loyal to the king in differing fashion. Jason J. Little and Carl Overly, Jr. show a similar deference to their wives. Their loyalty is never repaid and they fall, victims to Goneril and Regan’s ambition. Michael Tran expresses the wisdom of France with a humble consistency that pairs perfectly with King’s Cordelia.

Atum Jones provides and leads the percussion that replaces the cornets or bugles of Shakespeare’s era, reinforcing the plays setting in a North African nation. They help to set the mood and tone of various scenes while also keeping the pace. During the storm, the drums provide the thunder to John Wylie’s thoughtful lighting design’s suggestive lightning. The lights and percussion also effectively capture and amplify Lear’s decent into madness. Mika Eubanks costume design smartly mixes contemporary styles with nods to history and adds helpful color blocking among characters. Other technical details, such as Wilson Chin’s faded glory of a set, David R. Molina’s unobtrusive sound design and Rick Sordelet’s fight choreography, create an environment filled with visual interest and contextual cues reflecting Cofield’s direction.

Cofield paces the show well, providing a few quieter moments to almost catch our collective breath before barreling ahead. The approach is effective, as are most of the choices. The climatic sword fight between Edmund and Edgar is a bit slow and the actors somewhat encumbered by the extended double-sword choreography. I expect that scene to improve as the run continues. The other choice that gives significant pause is Edgar’s vocal affectation when in disguise in the woods. In this reviewer’s opinion, it borders on insensitive and potentially offensive. Fortunately, that choice can also be modified, or at least considered, and it does not significantly deter from an otherwise superior production.

Pod reservations are required this year to promote safely distanced viewing. The St. Louis Post-Dispatch cartoon synopsis returns to the entrance to Shakespeare Glen, giving audience members a quick recap of the story, and limited snacks and beverages are available for purchase. Engrossing performances and themes resonate deeply as interpreted by the majority Black cast and African setting, with sharp direction emphasizing forward motion and increasing tension. This "King Lear," continuing through June 27th at Shakespeare Glen in Forest Park, grabs your attention and delivers a stand out production.