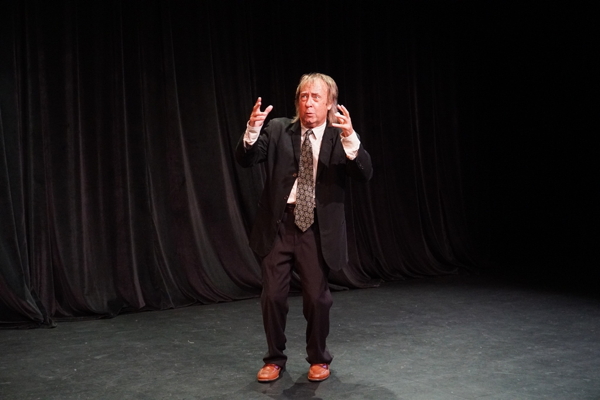 The latest one-actor show from The Midnight Company, ‘Here Lies Henry’ by Daniel MacIvor, is a mostly sweet reflection by an aging gay man trying to come to terms with his mortality. Starring Joe Hanrahan and directed by Ellie Schwetye, the pleasant show is strong on memory, and short on history. The rambling, gentle show touches on confused feelings, misunderstandings and awkward interactions, delivered in a kind, conversational patter.

Henry is approaching death, or perhaps he’s already recently passed. He’s a bit vague and purposefully dodgy about his circumstances, though he quickly mentions a potentially problematic dead body in the other room. It’s one of the interesting tidbits of information he sprinkles into his charming banter. But don’t be mistaken; Henry is here with a purpose. His task tonight is to tell us, the assembled audience, something that we don’t already know.

Henry, an everyman’s everyman, but nobody’s fool, is an unassuming, nondescript type. You might not notice him when he first enters a room, but he sees and remembers you. Honest, or at least true to his nature and self, Henry isn’t pretentious. But, he has gained a little wisdom over the years and doesn’t mind sharing. Though not particularly remarkable or notorious, Henry’s has been a full and mostly fulfilling life. He’s stood up for others on multiple occasions and felt his life threatened for doing so more than once. Not flashy or boisterous, Henry, nonetheless, keeps his word to support the right to love, and the pursuit of happiness and a partner of your choosing for all humans.

The character is right in Hanrahan’s wheelhouse -- down-to-earth and chatty, with clothing and a mind that’s a little disheveled, but not offensive. He’s mostly kind, though he’s got a gruff side and feathers that are easily ruffled by certain memories.

The actor and director work well together, mining the story for depth and ensuring everything wraps up with a light, hopeful tone that conveys sincerity. Schwetye does a good job of seeing the story through the emotional arc, reining in tangents to keep the pace moving while still planning necessary pauses. Hanrahan’s Henry is a guy you instantly know, and maybe had a brief conversation with once.

Henry is likeable and he’s got good stories. He eagerly engages directly with the audience from time to time, perhaps to see if we’re still paying attention. Unfortunately, none of his stories stand out with singular distinction, so he doesn’t leave a lasting impression. Henry’s burden is that he’s interesting but not necessarily memorable. This characteristic is also the show’s biggest flaw.

The Midnight Company’s ‘Here Lies Henry,’ continues through June 27, at the Kranzberg Black Box theater. While the show doesn’t introduce any new ideas or push theatrical envelopes, it is an enjoyable reverie that’s funny and not too neat and tidy. The skillfully engaging one-man performance runs just over an hour, which Hanrahan and Schwetye fill with all the important details. Luckily, they leave some questions for the viewer to settle. Including whether or not Henry fulfills his all-important purpose for addressing us tonight. After all, that’s a question only the audience can answer.