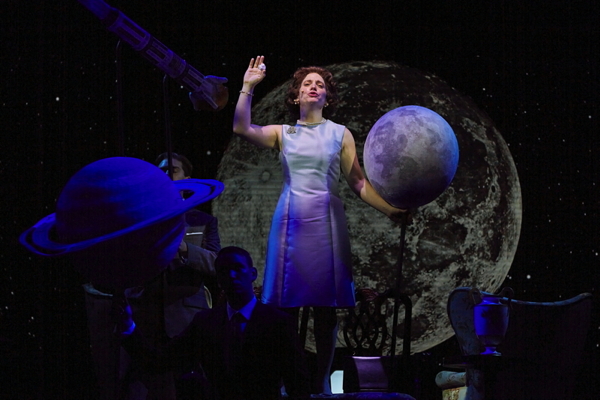 Well directed and performed, the operas feature a number of notable performances. Among the most memorable is Monica Dewey, in a variety of roles, but particularly as Queen Elizabeth. Markel Reed as James Baldwin, Melody Wilson as Janet Armstrong and Jonathan Johnson as Price Philip and William F. Buckley shine in their moments and the entire cast worked well together.

“On the Edge,” by Laura Karpman and Kara Stinson, is a modern opera in three scenes, featuring three families and spanning three months early in the pandemic. We see the myriad everyday ways Covid-19 changed the United States, and the world. Ways unimaginable just a year, a few months, before the first cases were reported. Then, just as we were adjusting, our country’s worst behavior was broadcast into living rooms and on smart phones around the world. Millions watched as video of George Floyd’s death cut through the noise and spilled out onto our streets.

The way out of our dueling pandemics – global health care and equity, justice and rights that are truly for all – is not clear. The short opera reflects the newness and ache that lingers still in three tight scenes. Though some editing and transition work feels likely, the piece is immediate and compelling. Musically, the opera employs a variety of themes, using tempo and cadence to showcase the urgency of our shared story and the performers’ voices. Texture and tone are emphasized through syncopation and phrasing, as well as more modern harmonics.

“Moon Tea,” by Steven Mackey and Rinde Eckert, is a surreal fantasy featuring Queen Elizabeth, Prince Philip, astronauts Neil Armstrong and Michael Collins, and Janet Armstrong. The fluid orchestration is quite whimsical and well matched with touches of unexpected choreography. The design echoes the fantastic story, with clever visual references, a most welcome confetti burst and motifs reminiscent of classical music associated with notable sci-fi movies. The motifs are suggestions through which the libretto, score and actors bounce with near-gleeful inner abandon.

The short opera gives us commoners a glimpse into the imagined private thoughts of a middle aged Prince and Queen. As they watch the moonwalk and then host the American astronauts for tea, their attention floats far away, lost in space. The pair, as personified by Dewey and Johnson, is sharp-witted and humorously relatable. Their guests, particularly Wilson’s Janet Armstrong, are equally immersed in their own thoughts, with occasional snapshots to record the events perfectly punctuating the delightful inner monologues.

“The Tongue and the Lash,” by Damien Sneed and Karen Chilton, opens in 1965 before offering a glimpse of today’s ongoing racial justice and equity struggles to its protagonists: James Baldwin and William F. Buckley. The conversation is challenging, always respectful, but at times heater. Reed and Johnson show each man’s passionate belief, even as the characters maintain tenuous self-control and vocal restraint. The tension is surprisingly thick for what on the surface appears as calm, rationale discourse, and it is riveting as opera.

The gentlemen respectfully debate civil rights in general and specifically, the paper ‘Achievement of America at the Expense of Africa Americans’. The truth and continuing relevance of the libretto is reflected in our newspapers and courts. The grace and elegance of the performances offers a stirring plea for empathy and action. The score effectively translates and supports the heavier topic and tone, though as an audience member caught up in the story, I found myself wanting

With energetic, imaginative scores, relevant themes and strong performances, the “New Works, Bold Voices Lab” short works are a great introduction for curious newcomers and long-time patrons wanting to see new shows. Fresh takes and modern influences mix easily with the traditions of opera in the hands of the librettists, composers ad performers featured in the show.