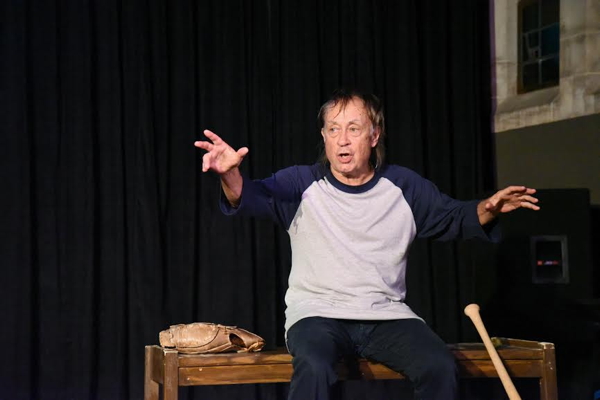 ‘Now Playing Third Base for the St. Louis Cardinals… Bond, James Bond’ is a solid base hit

Much like baseball, the latest offering from The Midnight Company, "Now Playing Third Base for the St. Louis Cardinals… Bond, James Bond" is a pleasant diversion. Written by and starring Joe Hanrahan, and directed by Shane Signorino with video design by Michael B. Perkins, the show is layered with nostalgia and commentary. Hanrahan’s animated performance and the script’s unfortunate but enduring relevance ensure the show resonates even as it reaches back to the 1960s for its plot.

In St. Louis, Missouri, the summer of 1964 was a significant one. Particularly if you were a young teen boy, obsessed with baseball, music, the movies and puberty. Doubly so if your parents moved you to a new neighborhood, introducing you to ideas like racism, segregation and white flight. For the narrator of this one actor show, all these ideas and pastimes coalesced together during that magical summer, leading him to his true calling – theater.

Bet you didn’t see that coming, did you? Or maybe you did, because this is a one-actor show after all, and not a one-man baseball team.

Hanrahan effortlessly moves between the real world of the St. Louis Cardinals' surprising run to the World Series that year and the imaginary world of super spy and renowned lothario James Bond. The Beatles' ascendence in the pop charts and personal impact on a young man’s sensibilities play a lesser, but still important, role. The events are typical of a U.S. summer, filled with sports, action movies and catchy pop tunes. The year is singularly formative to the narrator, introducing him to theater in the form of storytelling and play. Watching Hanrahan realize each thread and then connect the strands together is highly entertaining.

First, he’s 13-year-old Danny, rapidly retelling and acting out every detail of the new James Bond movie he just saw. Then, he’s Bond himself. Or maybe Harry Caray – a Cards broadcaster before he defected to Wrigley Field. Or one of the Black men selling concessions at the Ballpark and teaching the white schoolboys they worked with a thing or two. The story touches on some of the cruel realities of racism, which was more present and real in their lives than the Cold War, as seen through the eyes of a young man whose ideas about the world are still forming.

Signorino directs the show in a way that adds pauses and transitions without losing any of the energy and movement inherent in the script. It’s just enough for the audience to keep track of the various threads without distracting from the present scene. There are a few moments when the history behind an anecdote slows the pace a bit, but for the most part, Hanrahan and Signorino keep the show moving along briskly. Perkins’ video adds context that’s particularly helpful for those of us who don’t share all the cultural references of the period or city.

Hanrahan, adept at solo performance, weaves his tale with delight and a keen appreciation for the time and its personal influence on his life. Mostly though, he just dives in with two feet and total commitment to spinning and then tying together this fact-filled, anecdote riddled, often laugh out loud funny and surprisingly engrossing story. The combination is a more personal piece that showcases Hanrahan’s flexibility as an actor and skill as a storyteller.

“Now Playing Third Base for the St. Louis Cardinals… Bond, James Bond,” continues through July 25 at The Chapel. Though I would be curious to see how another actor would inhabit the character, Hanrahan is at his most compelling here and the show is a rare memory play that feels both nostalgic and topically relevant. The moment Hanrahan’s audience realizes his retelling of the James Bond movie is complete, signifying a transition to the conclusion, is palpable in the intimate theater space. And an actor can’t get much better kudos than a transfixed audience.