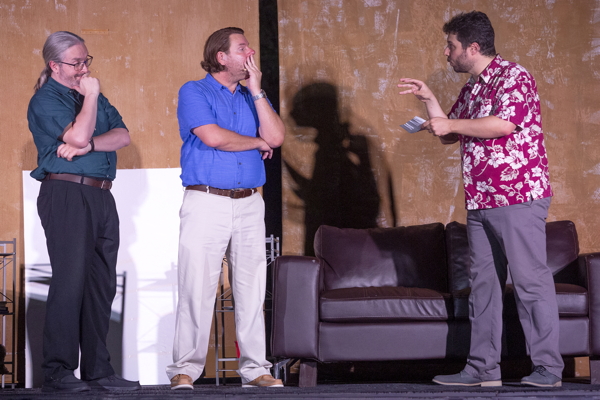 A person’s taste in art is generally acknowledged as a matter of personal preference, but is seldom viewed as such. People can and do, in fact, ascribe characteristics, traits and even values on another person because of the art on their walls. In the subversively funny “Art,” author Yasmina Reza takes this human tendency to personal extremes that leave little pinpricks in our assumptions. Stray Dog Theatre’s production, using the translation by Christopher Hampton, is tense but polite, and comically varied. With judgmental tones couched in flowery protestations of friendship and respect, the men’s barbs are delivered with skill but often yield unexpected results.

Serge has purchased an expensive piece of abstract art and is excited to show it to his close friends Marc and Yvan. Marc initially laughs at the piece. When he realizes Serge is sincere, he is filled with anger and revulsion. Yvan the anxious, less assertive of the three, finds the piece somewhat compelling but confusing. Easily swayed, he’s unwittingly drawn into the conflict by Marc and used as a pawn and emissary between the bickering friends. The anger and posturing builds until their friendships are threatened, and Serge makes a bold choice. Perhaps. He may have just manipulated the situation to appear as such.

Directed by Gary F. Bell and featuring Stephen Peirick as Marc, Ben Ritchie as Serge and Jeremy Goldmeier as Yvan, the show is not for the fainthearted. While we all logically know that everyone is entitled to their own preferences and opinions, it can be unsettling when someone with whom we’re close makes a choice radically different from our own. The script uses the fragility of privilege and ego to create an outrageously believable comedy about art.

Peirick and Ritchie hold nothing back in their portrayals, their remarks becoming increasingly vicious as each digs in his heels, and one is inclined to feel much sympathy for Goldmeier’s gentle, agreeable Yvan. There are times when the actors veer towards sitcom-ish, particularly Peirick’s bitter disgust at the thought of Serge not only not completely agreeing with him, but not consulting him prior to purchase. How dare he. Peirick successfully redeems this momentary excess with a more restrained and yet somehow unreflective and unaware outlook in the play's resolution. It’s a wonderfully absurd turnabout, made whole by Ritchie and Goldmeier’s nonplussed reactions.

With complete trust in each other and director Bell’s smart stage direction, the actors go from heated, to simmering boil to firebombs in the quick moving drama. The performances are uniformly solid and varied -- Peirick more jaded and caustic, Ritchie smug and certain, and Goldmeier a peacekeeper until, for a few brief moments, he’s not. Though this moment was not as over-the-top funny as it can be, the unexpected warmth was awkwardly funny and not incongruous with the character. With surprised satisfaction, Yvan is the one who propels the story to the very precipice of chaos.

To ensure safe distancing protocols are followed, the outdoor show is seated in pods and reservations are limited. The small, practical set pieces and unobtrusive lighting complement without distracting, as suits outdoor performances. The humor here is not always nice, or even in good fun, but the pointed show offers plenty of laugh out loud moments for adult audiences. Satisfying and cathartic, if not always pretty, Stray Dog Theatre’s “Art” continues through August 21st on the lawn of the Tower Grove Abbey.