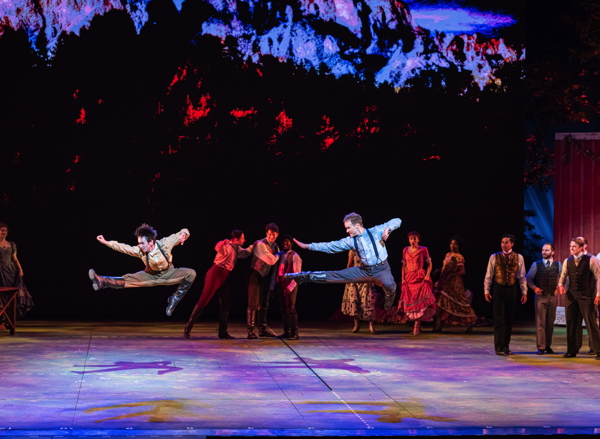 After a rare opening night rain out, an eager audience enjoyed The Mun’s rollicking production of the romantic comedy “Seven Brides for Seven Brothers,” based on the MGM film of the same title by Lawrence Kasha and David Landay. Set in Oregon during the westward expansion, the musical delivers laughs and romance with the feel of an up-tempo, dance filled hoedown.

The show about Adam Pontipee, a homesteader and trapper living in the mountains with his six brothers, is lighthearted and filled with good intentions and strong, athletic dances. His decision to find a wife, including his unconventional courtship of Milly Bradon, propels the fun, not too serious story forward.

The plot could easily turn dark, but the focus of this show is the dancing and romancing, so obstacles are few. Kendra Kassebaum, as Milly, and Edward Watts, as Adam, are compelling. They flirt and create chemistry that translates well from the big stage to the back row. Watts voice draws us in with the eagerly optimistic “Bless Your Beautiful Hide,” highlighting his smooth rich tone. Watts has a good range that harmonizes well with Kassebaum and the brothers. Kassebaum’s voice is clear and bright the notes seemingly effortless and she ages gracefully for the bookends of the story.

The brothers’ scenes, from Milly teaching them manners and how to behave to Adam encouraging them to act boldly, if foolishly, to the townspeople’s bias to their unbridled joy at the brides unexpected (though entirely expected) choices, sparkle with energy and excitement. Most importantly, however, the brothers and the brides are the centerpieces for the famed dances, which remain the primary reason cited for revivals. The 12 compliment each other well, creating plenty of cute moments and, naturally, they dance together fantastically and with complete confidence.

From a story perspective, the script is a bit thin and the plotlines suspect. Director and choreographer Josh Rhodes keeps the scenes light while calling to question the general chauvinism and misogyny of the time. Kassebaum pushes the feminine skepticism and determination to stand her ground emphatically, but all feels true to the spirit the writers intended. Though it can undoubtedly be interpreted differently, the dialogue suggests a more contemporary take. In The Muny’s production, Milly is easily able to challenge not just Adam, but ideas that women are all alike, much less that they are happy to be treated as property.

Still, I’m personally perplexed by the choice and just don’t see a compelling reason audiences are hungry to see this story. Honestly, I am also tired of men learning to see and respect women as people of value when they have a daughter they want to protect. But I remember that this script is older than me and can appreciate the sub-contextual and tonal cues that acknowledge shifting views. Having said that, the story moves along at a nice pace, the characters are likeable and the choreography makes excellent use of Broadway, ballet, jazz and modern dance. Rhodes keeps audiences captivated by emphasizing the dancing, and the big numbers deliver the spectacle.

“Seven Brides for Seven Brothers” is that rare musical where the all company numbers are the showstoppers, and this production does not disappoint. Props and set pieces are used to great effect, and the more difficult moves and jumps elicit enthusiastic applause from an appreciative audience. “The Challenge Dance” fluidly incorporates traditional square dances, minuets and reels with more modern athletic moves. “Going Courtin’” and the “Wedding Dance” also successfully combine influential modern dance styles as well as western swing and the folk canon. Even the smaller group numbers, such as “Wonderful, Wonderful Day” and the “Quiltin’ Dance,” are executed with flourish and precision. It’s effective and entertaining, helping to cushion the dated views of women and unconventional courtship methods.

The story is never serious, but played for fun. Under Rhodes keen eyed direction, the barbs that suggest change and equal capability are the ones delivered with the sharpest points, and a playful touch. This helps lessen the abundant stereotypes and thematic tropes present in the dated, but not entirely irredeemable, script. More importantly, the big dance numbers are big, bold and really delight the audience. Laugh at the tired tropes -- they’re set up for that -- and enjoy the spectacle. “Seven Brides for Seven Brothers,” continuing through August 18th, is a show to see for the dances and the Muny stage is a perfect setting to let them shine.