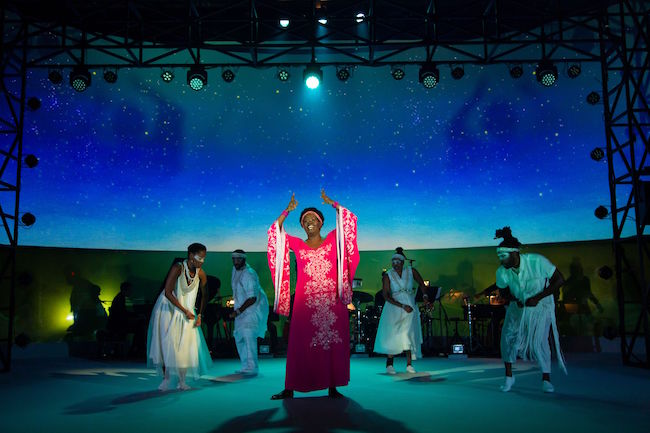 With fall comes the traditional new theater season, and venues large and small are welcoming masked, socially distanced audiences back with open arms and engaging productions. The Repertory Theater St. Louis is no exception. And, from the response of the lively crowd in attendance on opening night, audiences are delighted to be back.

“Dreaming Zenzile,” a visual and musical play, opens The Rep’s season with show that envelops the audience with warmth and excitement. The life story of international star Miriam Makeba is interwoven with music and the presence of her ancestors, who frequently interrupt her songs with their insistent beckoning. The show is rhythmic and spirited, and crossed with spirits and history. Skillfully transitioning from Zulu and South African songs to American Jazz, the show thoroughly engrosses from the opening notes.

Zenzile Miriam Makeba, the singer and activist, was born in segregated South Africa in 1932. Even in a childhood filled with poverty, starvation and police brutality, Zenzile found strength through her voice. Not simply through her music, but also by being an outspoken proponent of equal rights and for the end of apartheid. The lively script by Somi Kakoma, directed by Lileana Blain-Cruz, seamlessly moves from story to song and from the present time to the past, with characters from this world and the unknown.

An entertainer at heart, Makeba was performing in Italy the night of her death in 2008, and the show opens on this scene. In the middle of an up-tempo piece, the lights dim, the music slows, almost as if coming through a barrier. The fading notes of the band’s instruments are soon replaced by a cappela voices. The effect fills the room with sound. We soon learn these characters are from the spirit realm and they are beckoning to Makeba, telling her it is time to go. Blain-Cruz artful staging smartly establishes their presence apart from Makeba’s daily reality, but clearly connected and familiar to the singer.

Show creator Kakoma is effortlessly compelling in the title role, and her voice proves equal to the task. It is clear that Kakoma feels a deep, personal connection to the artist, her performance is reverent, her knowledge of the subject thorough and heightened with empathy. Kakoma is quite expressive, revealing every thought and feeling on her face and moving her hands, arms and body in ways that emphasize her point. Her vocal interpretations make it easy for English-speaking audiences to pick up on the sense of a song when they can’t understand the lyrics.

Collectively referred to as the Sangoma Chorus, the ensemble includes Aaron Marcellus, Naledi Masilo, Phumzile Sojola and Phindile Wilson. Together with Kakoma, they fill the theater with the sound of a much larger chorus, while each individually portrays multiple people in Makeba’s long life. Well-coordinated movements, and costumes by Mimi Plange, harmonize with Marjani Forté-Saunders’ choreography creating a distinct ‘world’ that the actors live in. One that Makeba can see an interact with, a will soon join. The sense that time is both stopped and infinite comes across well, adding to the stories pull.

The actors are joined on stage by a lively quartet featuring music director Hervé Samb on guitar, Toru Dodo on piano, Pathe Jassi on bass and Sheldon Thwaites on drums. The ensemble and band fluidly shift from traditional and popular African music to American jazz, including a few standards delivered in Makeba’s distinct style. The synchronicity between the band and actors effectively mimics the feel and energy of a live concert. Kakoma’s voice dances and jumps along side the wild chords and rhythms with the same improvisational ease as the musicians, until she effortlessly hits on an impossible note.

Scenic Designer Ricardo Hernández, lighting designer Yi Zhao, sound designers Justin Ellington and Bill Kirby, and projections designer Hannah Wasileski enhance the show’s sense of time and space, as well as time in space, in ways that meld concert and theater together. The effect is mostly successful, though some of the plot detail gets muddled here and there without more direct focus.

The music is spellbinding, full of emotion and texture. The story could benefit from some judicious editing. The action lags at times, and is seemingly lost in spots in ways that don’t serve the show. A critical review of scenes and narrative structure may find areas to cut. Makeba’s love affair with Stokley Carmichael, star struck as it may be, stands out as potentially worth sacrificing. Particularly if it makes space to show more of Makeba’s relationship with her daughter – to explore that love and loss rather than another romance.

Even with a few questionable scenes, “Dreaming Zenzile” is thoroughly captivating and entertaining. Makeba’s story is fascinating and her role important to our understanding the sacrifices that were made by generations preceding our own. Outspoken and unafraid even after experiencing the violence of apartheid, Makeba is another key figure who furthered the cause of human rights and equality in the 20th century, yet remains largely unheralded. Her story is just one of many that needs telling. The world premier production, continuing at The Rep through October 3, pays tribute to the iconic musician with a house full of joy and blues and all the textures in between.